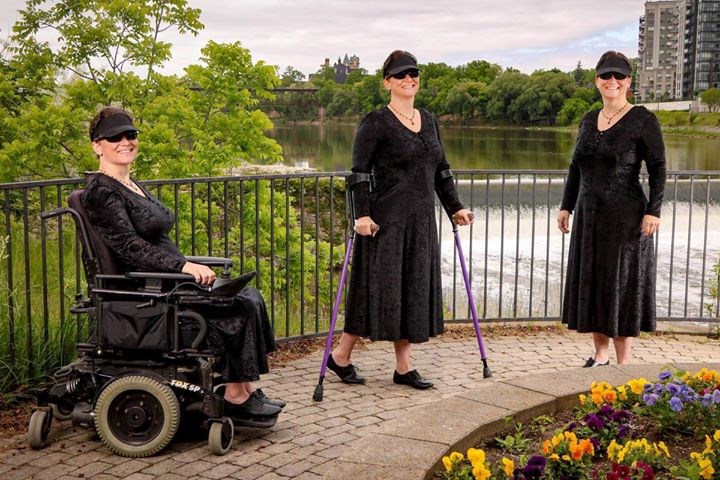 “I watched my mother die of cancer at home, for over 13 years, while suffering quietly from abuse,” said CJ Janzen.

She credits her mother with her decision to fight for a ‘normal’ life, despite living in a perpetual state of exhaustion and pain. “I chose to live joyously, within the tempest of adversity."

“Myalgic Encephalomyelitis (ME) still rules what I can and cannot do, but it doesn't prevent me from being the best version of myself and having the ability to bring joy and hope to others.”

The Vice President of Education for Cambridge Toastmasters says was adopted at the age of four-months to a loving family. "My mother who battled valiantly, for 13-years with breast cancer, chose to die at home and passed away when I was 16. I spent much of my youth caring for her and this was very hard on all of us. That said, my mother’s desire to live, to fight, and yet to still find humour in life taught me so much."

Growing up, she remembers dreaming of becoming a professional singer, a pilot, or an auto mechanic. “As I got a little older, I added paramedic to my list, and that’s the direction my post-secondary schooling initially took me.”

She describes the years that followed her mother’s death as some of the darkest times in her life. “I had a few counsellors who helped keep me alive,” she said. “You never know what a kind word can do for a person. It can be a life-altering moment."

Admitting she became a trauma junky, her path to becoming a paramedic was driven by the many occasions an ambulance visited her home.

Working as a paramedic, at an event, she met a woman who introduced her to the idea of driving an 18-wheeler. “I spent 10 years driving big rigs from Winnipeg to New Mexico and everything east. I eventually become an over-the-road trainer, to help women, new to the Industry, learn the trade safely,” she said.

While on holiday in Cuba she caught the eye of a resort owner, and was offered a job as a dive master. “That was all the incentive I needed to start my training.” She left truck-driving behind and moved to Honduras to complete her instructor’s certification.

A short-term contract, in Greece, was offered. "I jumped on a plane, knowing nothing and hoping for the best,” Janzen said. She would go from Greece, to England, to Indonesia; to work for the top five diving resorts in the world. “From there, I landed a job in the Maldives, then Thailand, where I took a professional underwater videography course and completed my Master Instructor program.”

She would take a job in a tiny village in Mexico near the Belize boarder. “It was here I contracted an unknown virus, on my birthday, no less.”

Life was about to change - drastically.

“I was celebrating my 39th birthday when I woke up feeling unwell,” she recalls, "I thought it might be the flu.”

Having not lived in Canada for over five years, she says she was not entitled to use our medical system. "I had to wait three months, not knowing what was going on.” At the same time, she was secretly battling another illness - alcoholism. This battle, she admits, started in childhood. “Within five days of being rolled off a plane, in a wheelchair, I made it through the doors of AA.” Today, she celebrates seven years of sobriety.

She spends 85 to 99 per cent of her day in bed and is light and sound sensitive. “I feel like an old-fashioned windup toy. I start off well, but by the time I get home I can hardly move or speak,” she said.

Despite the realities of her new world, she remains thankful. “I have a roof over my head and a comfortable bed to lie in. I live below the poverty line, but I have enough, few frills, but enough,” she says. She has found purpose in providing messages of hope. “I have done well in the speech competitions and won a Bernice Adams award.”

“I am competing next month, in the Toastmasters International Evaluation and Speech Competition, using my speech called; 'By Learning to Forgive, I Have Been Set Free'."

“My dream is to make it to the World Championship of Public Speaking in Paris, France this year.”

Local psychology student in the running for Miss Universe
Oct 5, 2020 12:15 PM
Comments
We welcome your feedback and encourage you to share your thoughts. We ask that you be respectful of others and their points of view, refrain from personal attacks and stay on topic. To learn about our commenting policies and how we moderate, please read our Community Guidelines.