Elmira gets set to host the Canadian Sledge Hockey Championships 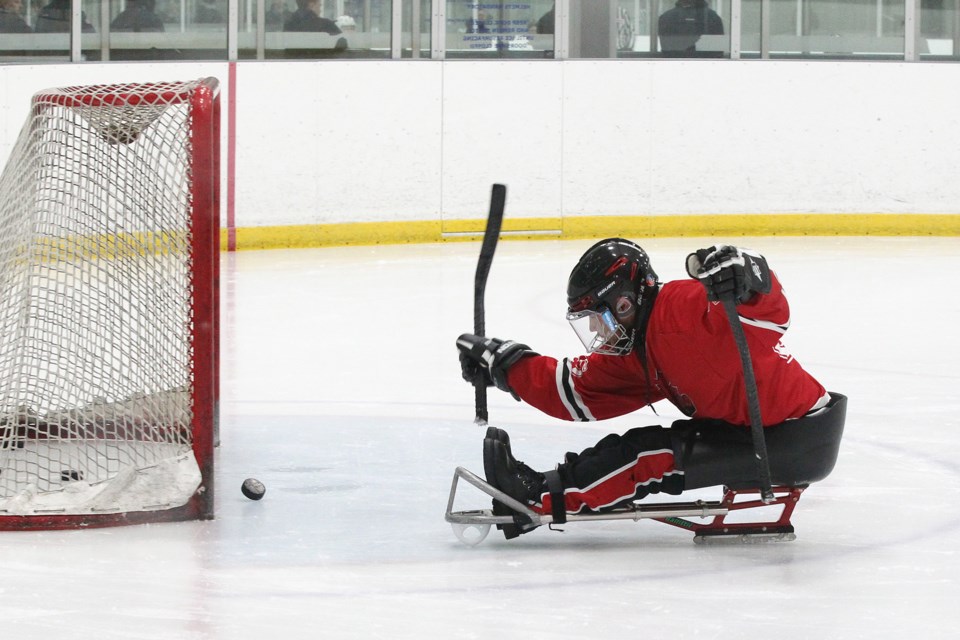 "I certainly don't think 10 years ago when we started the (Woolwich) Thrashers, we could have imagined that one day we'd be hosting the Canadian Sledge Hockey Championships," says Sandy Metzger, who together with her husband Keith founded the Woolwich Thrashers Sledge Hockey team. Ten years ago their goal was simple: to give kids with disabilities an outlet where they could learn how to play sledge hockey, and have fun.

"We had a brand new accessible facility here in Elmira," says Keith. "We started with 3 or 4 kids on the ice every second Saturday. Now we have 41 players, and get 2 hours of ice time every Saturday during the season. It's been a journey!"

That journey has included a move that saw the Thrashers grow from a recreational team, to becoming part of the Western Region of the Ontario Sledge Hockey Association two years ago. "We never dreamed we would grow big enough to become a feeder system, where we could have a junior program that develops players for an intermediate team," says Sandy. An intermediate team certainly seems to be in the near future for the Thrashers, as the game, and the players' competitive spirit, grows. And now the Thrashers, together with the Township of Woolwich and the Ontario Sledge Hockey Association, are hosting the Canadian Sledge Hockey Championships May 10-12, 2019 - an opportunity for their young players to see some of Canada's best sledge hockey players in action.

"We thought hosting the championships would be a great way to top off our 10th anniversary," says Sandy. "We'd been talking to the Township and the arena staff for years about bringing a sledge event to Elmira, because we have this great accessible facility. The arena hadn't been used yet at this level of sledge competition, so we decided to put a bid in (for the Canadian championships), and we were awarded the games."

Being part of the organizing committee for the tournament has been a labour of love for both Sandy and Keith. "They (Ontario Sledge Hockey Association) gave us the 'what', but didn't give us the 'how' when it came to planning the tournament," says Sandy. "The 'what' was that we must stream the games (they will be streamed on hockeytv.com), we must provide shuttles for the athletes, and we must feed them. And we needed to work with OSHA to get the officials. Other than that, we had free reign in a lot of things."

The planning committee made a conscious effort to support local with all of their decisions. "Anything we can do to try and keep things local, to put money back into the community and make a bigger economic impact is important to us," Sandy explains. "Maybe that's a small town thing."

The planning committee also wants to ensure the Canadian Sledge Hockey Championships is an event that everyone can be part of, which is why they decided to make this a free event for the public to attend. "We just want people to come out and support the event," says Keith. "Right now we've made arrangements for over 1,050 students to come and watch three games on Friday."

Sandy adds, "Most of these teams aren't used to having big crowds watching them, so it'll be an exciting, noisy arena for the players on Friday. We're hoping to keep the fan base going on Saturday, and for the two medal-round games on Sunday."

Fans attending the games are in for exciting sledge hockey action. "The teams that are coming are very high calibre teams, so it will be very competitive," says Keith. British Columbia, Alberta, Quebec and Ontario will all be vying for gold. Earlier this month, Team Ontario held its final training camp in Elmira, which provided organizers an opportunity to do some fine tuning for the championships. "The benches had to be taken out from the players' bench to make room for the players and their sledges," explains Keith. "We also needed to make sure the dressing rooms were fully accessible for the teams."

With the clock ticking down to the championships, organizers are busy with final preparations. They're still accepting volunteers, and anyone interested in helping out can connect with the organizers through the website. They're also still looking for sponsors to help defray the costs of hosting the championships. "The more sponsorship we have, the more we can do for the athletes," says Sandy. "We're setting the bar really high for this tournament, because we want the players to have a great experience." The Thrashers have also been busy fundraising for the tournament, to help offset costs so that fans don't have to pay to attend.

"By making this a free event, it's an event for everybody. We hope people will come and check it out!"