WatVision was created to help those who are visually impaired or blind navigate touch screens
Sep 5, 2018 8:25 AM By: Blair Adams 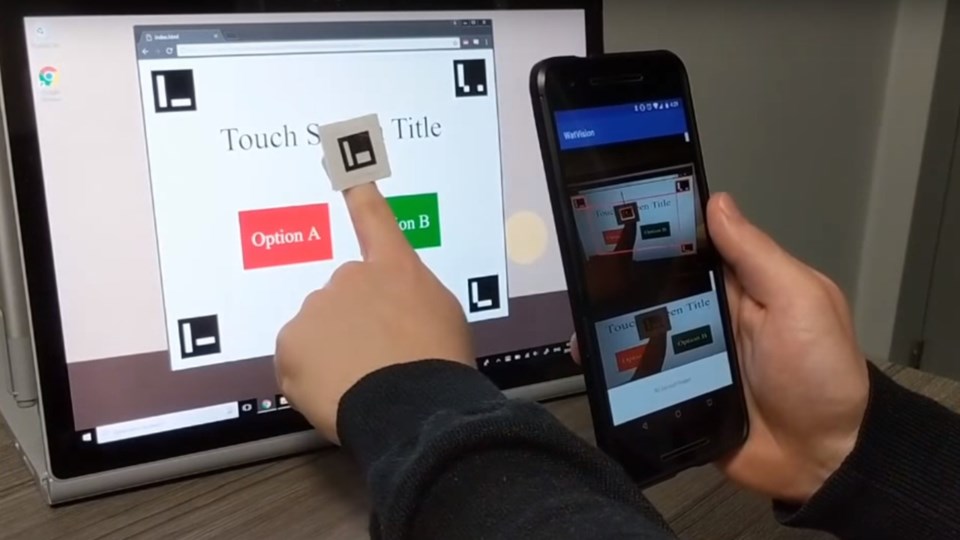 You probably use one daily in the form of your smartphone.

But touch screens are inaccessible to those who are visually impaired or blind.

However, a team of engineering graduates from the University of Waterloo are trying to change that.

They've developed WatVision, which uses a smartphone's camera and processor to look at a touch screen, and provide feedback to the user, without them needing to see what is on the screen.

The app is paired with a wearable to do exactly that.

"The phone can track your hand as you explore the screen and using ... optical character recognition to read the text on the screen ... we can use text to speech for the app to read out to the person what the different options on the screen are." said Lior Lustgarten, one of the project managers of WatVision.

On Wednesday, WatVision, which Craig Loewen also helped develop, won the top prize in the Canadian leg of the James Dyson Award.

The award is open to university level students, as well as recent graduates - studying product design, industrial design and engineering.

WatVision, which is still in the prototype phase, has been made an open source project, meaning all the code is posted online.

"And as an open source project, we basically tapped into developers around the world, who can come help us build it." Loewen told KitchenerToday.

"We want to kind of keep working on this ... in a way that can be used the most ... that's our main goal with it, that it gets used, that it's helpful." added Lustgarten.

Loewen says reaction to WatVision has been "awesome".

Some of that positive feedback came at the University of Waterloo.

"The coolest one for us is that we had somebody come by our booth at the mechatronics symposium, who was visually impaired, their specific impairment is that they could see, but only a near distance in front of them ... they were able to use it instantly, because we actually show on the screen, a highlighted view of the screen and where you're pointing and it reads out to you ... They were really excited about it ..." explained Loewen.

He says that person wanted to use it right away on one of the touch screen kiosks at the university.

Flu shot campaign first pillar of Ontario fall pandemic preparedness plan: Ford
Sep 22, 2020 6:30 PM
Comments
We welcome your feedback and encourage you to share your thoughts. We ask that you be respectful of others and their points of view, refrain from personal attacks and stay on topic. To learn about our commenting policies and how we moderate, please read our Community Guidelines.