Two UW students among those killed in plane crash in Iran

Marzieh Foroutan and Mansour Esnaashary Esfahani were both PhD students
Jan 8, 2020 11:39 AM By: Blair Adams 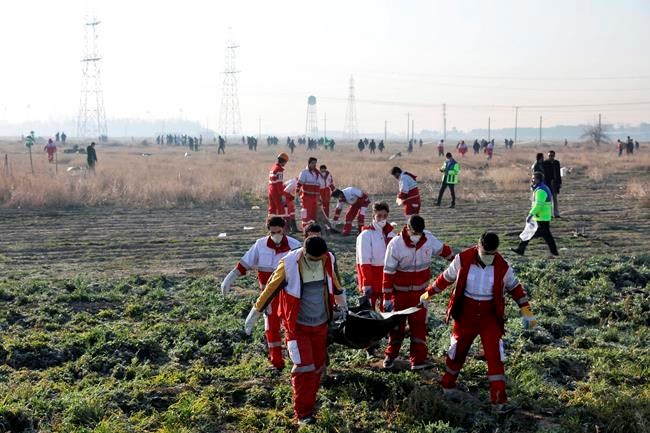 Photo from The Associated Press

Dozens of Canadians - some university students - were among the 176 people killed when a Ukrainian passenger plane crashed minutes after takeoff from Tehran's main airport, Iranian and Ukrainian authorities said on Wednesday.

The University of Waterloo confirms to 570 NEWS, two PhD students from UW, Marzieh Foroutan and Mansour Esnaashary Esfahani, were listed on the passenger manifest of the flight.

The president of UW says everyone at the university is shocked and saddened by the news.

"Our hearts ache for them, their friends and family with whom we all mourn together. Mari and Mansour were part of a close-knit community of researchers here at Waterloo who will need our care and support." Feridun Hamdullahpur said in a statement. "We are united with the Canadian academic community and all Canadian-Iranians in grieving the loss of Mari and Mansour and the loss of so many other students and researchers from across Canada. As we grieve, we will support the family, friends and co-workers of those who have died and keep them in our thoughts at this most difficult of times."

With heavy hearts we share that Marzieh (Mari) Foroutan and Mansour Esnaashary Esfahani, two #UWaterloo phD students, were listed on the passenger manifest of flight PS752. Our thoughts are with their family, friends and all those lost in this incident. https://t.co/LxAQDTpvCr pic.twitter.com/mXfjeKDTPY

My heart aches for our students lost and our community that grieves on this tragic day. https://t.co/nJ4ADG834q

Laurier offers its heartfelt condolences to all those who lost friends and family on the Ukrainian flight PS752 in Iran, including our colleagues at @UWaterloo, @uofg and a number of other Canadian universities that lost members of their community in this tragedy.

Students and staff at UW who need any support are being asked to contact the following resources:

"Our thoughts and prayers are with the families and friends of the passengers killed on flight PS752. This hits particularly close to home as two UW Ph.D. students were on that flight, and are gone far too soon." tweeted Waterloo Mayor, Dave Jaworsky.

The Ukraine International Airlines Boeing 737-800 was en route to Kyiv when it went down in a field.

Authorities initially said it appeared mechanical failure was to blame, but later took that back, saying nothing had been ruled out.

Canadian Foreign Minister Francois-Philippe Champagne said Wednesday he had been in touch with the government of Ukraine.

"Our hearts are with the loved ones of the victims, including many Canadians," Champagne tweeted.

The crash comes amid increased tension in the region following the American assassination of a top Iranian general near Baghdad and retaliatory missile attacks on U-S bases in Iraq.

Two U of G students among those that perished in Iranian plane crash
Jan 8, 2020 12:16 PM
Comments
We welcome your feedback and encourage you to share your thoughts. We ask that you be respectful of others and their points of view, refrain from personal attacks and stay on topic. To learn about our commenting policies and how we moderate, please read our Community Guidelines.