Quick action urged ahead of National Summit on Islamophobia

The National Council of Canadian Muslims has released a list of 61 recommendations in advance of Thursday's summit
Jul 21, 2021 4:50 PM By: Casey Taylor 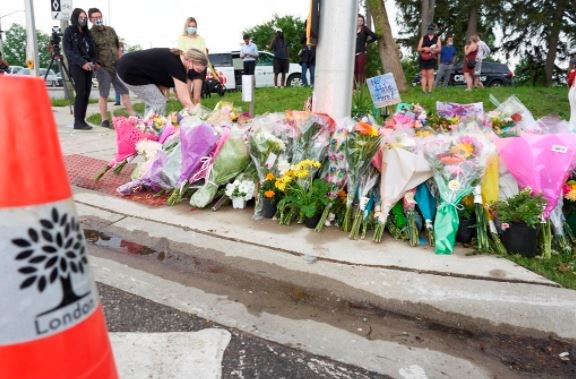 Mourners place flowers at the scene of a hate-motivated vehicle attack in London, Ont. on June 8, 2021, which left four members of a family dead and their nine-year-old son in hospital The Canadian Press

Canada is facing down a 'crisis of hate'.

That is according to the National Council of Canadian Muslims which has released a list of 61 policy recommendations in advance of a National Summit on Islamophobia set to be hosted by the federal government on Thursday.

"Whether we are seeing churches burned down, whether it's been seeing anti-black racism, whether it's been, of course, the horrifying London terror attack, the problems around hate and specifically around Islamophobia have been devastating," said Mustafa Farooq, Chief Executive Officer, National Council of Canadian Muslims (NCCM).

The NCCM says there have been more mass-killings of Canadian Muslims over the past five years than during the same five-year period in any other G7 nation, which includes France, Germany, Italy, Japan, the United Kingdom and the European Union.

The NCCM says the National Summit on Islamophobia is not meant to discus if there's a problem, but what we are willing to do to try to stop it and when.

Farooq says the spotlight also needs to shine on issues like the challenges of online hate, the criminal code, and remedies available for people who have been and continue to be targeted by hate.

Advocates like Farooq and the NCCM also want quick action. They say the time for waiting is over and this list of recommendations include elements which can be acted on quickly; it's up to the different levels of government to choose to move.

"A Special Envoy on Islamophobia; the prime minister can create an office tomorrow," Farooq said. "At the provincial level, there can be a commitment by the education minister to look at building anti-racism and an anti-Islamophobia strategy specifically, tomorrow.

"And, if there is no action taken within a reasonable timeline, we're going to, unfortunately, likely see more violence," he said. "That's not acceptable and that would mean the entire process would be a failure."