Considered an ‘odious and hateful symbol’, Randy Guzar is petitioning the federal government to condemn the swastika as a ‘sign, symbol, or name’
Jun 7, 2021 5:15 PM By: Luke Schulz 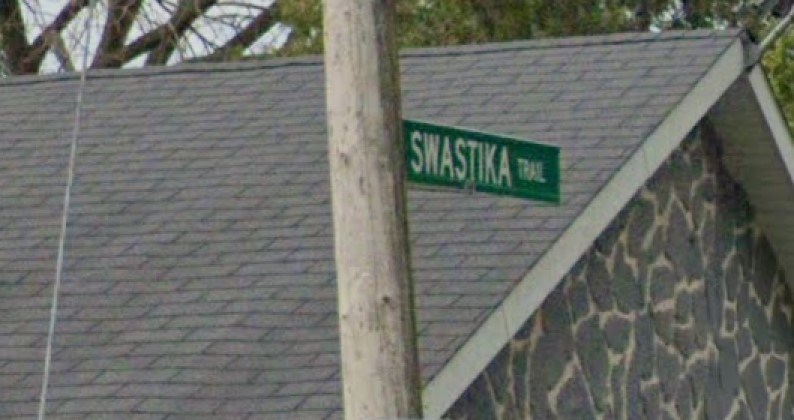 A photo of Swastika Trail from Google Maps.

After fighting for years to have the name of the street on which he resides renamed, Puslinch resident Randy Guzar has found support in a Cambridge MP – even though his concerns stem from outside that individual’s riding. Calling the Swastika Trail name both shocking and offensive to Canadians, Guzar said he and his neighbourhood group have  “put the wheels in motion” to change the street name that is “linked through a cord of steel to racism and hate”, garnering nearly 2,000 signatures on their petition to have the federal government condemn the swastika as a symbol, and to work with appropriate levels of government to ensure that the “swastika” is changed in any public place where it’s used as a sign, symbol or name.

Speaking with 570 NEWS, Guzar said the initiative started as a “grassroots organization” of residents looking to make their community more welcoming and more sensitive. Citing Canada’s value as a diverse, welcoming and multi-cultural country, Guzar argued that the “Swastika Trail” name doesn’t reflect what our country stands for. After exploring a number of avenues to have the street renamed Guzar said he found a “reluctance” from his elected officials to address the issue, stating that he was disappointed that his own MP and MPP “refused to use their voice and platform”.

“Were very, very disappointed in our elected officials at all levels of government. I was introduced to Bryan May and he’s been welcoming right from the start. He’s been extremely supportive.” said Guzar. “We fully understand [MPs and MPPS] don’t have the jurisdiction nor the authority to rename Swastika Trail, but again, they have a platform and they have a voice – and they can use that voice to influence others. We’re greatly and deeply disappointed in them and embarrassed in particular of the few comments they have made over time.

Bryan May is the MP for Cambridge, and said he’s proud to be the “vehicle” through which Guzar’s concerns about the street name can be heard. While Swastika Trail may sit outside of May’s riding, the Liberal MP said he made a “bit of an exception” to sponsor his petition so it could be tabled in the House of Commons. Regarding the street’s name, May admitted that he understands the symbol of the swastika carries a “religious historic significance”, though he adds that in this date the term is much more closely associated with the Nazi regime.

“This is a municipal decision. I know Randy has gone down that road without success, but it’s up to municipalities to make these changes. This is essentially a petition to ask the government to respond to this – but it is a regional, municipal jurisdictional decision.” said May. “I’m hopeful we can get this through and tabled before we rise for the summer, so we can allow that process to move forward.”

When asked about the impact living on the Swastika Trail has had on his life, Guzar said he and some of his neighbours are anxious when asked to provide identification – as he said it’s the “exception that people don’t make comments on it.” According to Guzar, remarks about his address range from lighter comments to accusations of white supremacy.

In facing opposition to having the name changed, Guzar was asked what sort of arguments he’s heard to keeping the street name as it currently stands. With some advocating for preserving the history of the street, Guzar said he is “unmoved” by any historical argument that the word is worth keeping. Rather than trying to “erase history”, Guzar said he and his neighbourhood group are looking to “correct a past mistake”, as he adds that if there is any history to be preserved, it should be in a library or a university.

“How do you two side the swastika? There just aren’t two sides to it at all.” said Guzar. “It’s clearly linked to genocide, murder, hate and atrocities committed against almost every group of people (…) it’s terrible, it has no place in an inclusive Canada; in a modern Canada, and that’s the bottom line.”

With his House of Commons petition set to close to signatures on June 18, Guzar said he’s been “absolutely overwhelmed” to see support from coast to coast, adding that he’s hopeful more Canadians will lend their voices to his cause prior to that date.