KidsAbility announced Thursday it would need to layoff between 20 and 25 autism staff by January
Jul 25, 2019 5:15 PM By: KitchenerToday Staff 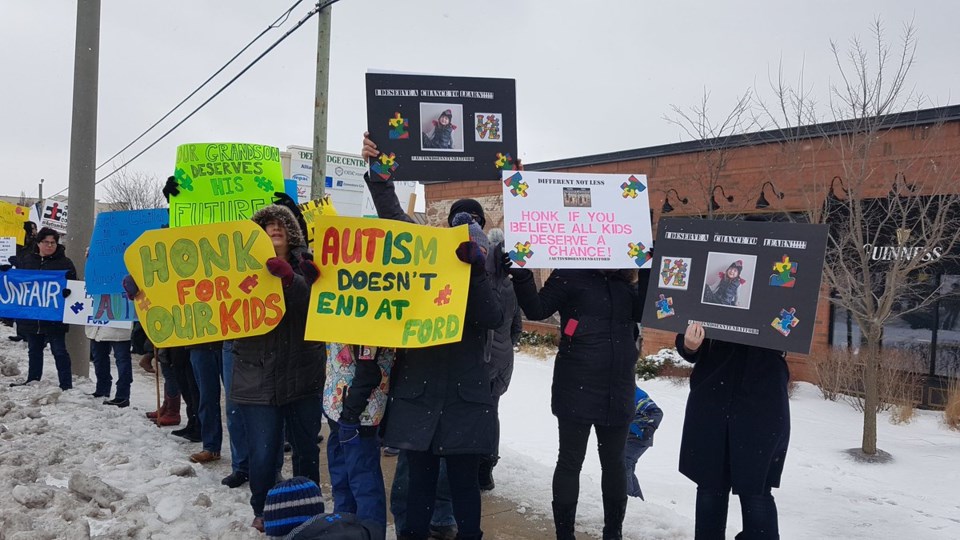 File photo of an autism protest in February 2019. Mark Pare/KitchenerToday

KidsAbility will need to cut up to 25 of its autism staff by January.

Employees were informed of the news on Thursday morning.

It's due to reforms to the Ontario Autism Program.

"Doug Ford and his government are picking on children in this province," OPSEU President Warren (Smokey) Thomas said in a release. "The man who claims to be 'for the little guy' has targeted the most vulnerable members of our society through cuts to child care, education, foster care and, in this case, autism services. It's disgraceful."

The union says under the province's new fee-for-service model, there will be fewer agency-based services and fewer qualified professionals to help children with autism.

"The worst thing any society can do is focus on the present and forget the future. If we don't get these kids the services they need, where they need them, to lead independent, productive lives, we'll all end up paying a huge price. And while it's hard enough for families in urban centres to find autism professionals, but it's particularly difficult in rural and northern areas." added OPSEU First Vice-President/Treasurer Eduardo Almeida.

"This is just the latest stepping stone down the rocky path to privatized health care," he added.

Direct provincial funding to KidsAbility for autism services will cease by April 1, 2020.

The province will provide direct funding of up to $20,000 for children under the age of six, while those six and over are eligible to receive $5,000 annually up to a lifetime maximum of $140,000.

KidsAbility will need to layoff up 25 staff due to changes to Ontario Autism Program
Jul 25, 2019 11:21 AM
Comments
We welcome your feedback and encourage you to share your thoughts. We ask that you be respectful of others and their points of view, refrain from personal attacks and stay on topic. To learn about our commenting policies and how we moderate, please read our Community Guidelines.