Many say it was a missed opportunity for the Catholic school board to try and reconcile with the LGBTQ community.
May 28, 2020 5:25 PM By: Aastha Shetty 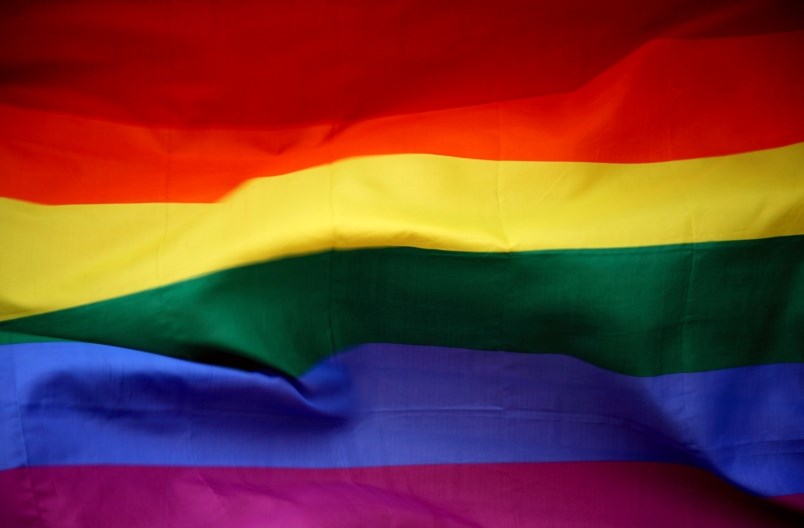 The Waterloo Catholic District School Board is feeling the heat from the local LGBTQ+ community after board members created their own rendition of the pride flag, including an image of Christ and a quote from the Bible.

Members of the LGBTQ+ community are also criticising some of the comments made by a Catholic school board trustee, Greg Reitzel, in which he calls pride one of the deadliest sins.

Chairman of Heart Beats Hate, Alan Quarry tells Kitchener Today with Brian Bourke on 570 NEWS he wants to see more action from the Catholic school board.

"My advice to the board of this organization is to not just print 'inlcusion' on banners, but actually do it!"

He says the school board should have just chosen to put up the original rainbow pride flag instead of creating their own version.

"I mean when I read about Mr Reitzel's first thing about pride being a deadly sin.. I thought okay, I went to Sunday school, I guess there's a connection to that -- but that isn't what the reference is to! The reference is to a flag."

He says what the board has produced doesn't count as a pride flag and cannot replace the original rainbow flag.

"As a pastor, my heart goes out to the LGBTQ Catholic youth who were really looking for this as an opportunity to have some significant movement, to have some reconciliation, to have some acknowledgement of the ways they've been hurt by the Christian doctrine. I think the Catholic Church missed out on a tremendous opportunity to do that."

She says the school board's pride flag doesn't bring justice to all the LGBTQ youth who have been condemned by the Christian doctrine.

Carly Pettinger, a member of the LGBTQ community, says WCDSB has no authority creating their own pride flag to replace the rainbow flag.

"I just can't stop thinking about local queer students who are likely at home with parents, with family that don't celebrate their identity. The board had an opportunity to fly an international flag of love and acceptance."

She says the Catholic board should just fly the rainbow pride flag instead, because it's what students want.

"This isn't something that we -- the local queer people, just pulled out of a hat. It's what local Catholic students here petitioned and asked the board for respectfully."

Following the backlash, Trustee Greg Reitzel has made a statement to clarify his comments:

"I supported the proposed flag at the Board meeting and continue to support this flag as I believe it is truly inclusive of all.  I have always been an advocate for inclusion in our schools and for as long as I am a trustee will insist that everyone is to be treated with dignity and respect.  I am deeply saddened that people have been hurt by words that I said but hope that they will understand that they were taken out of the context of the meeting as a whole and hope that they can focus on my earlier statement which is much more indicative of what I truly believe. 'I think this shows that we care about everybody, everybody is made in the image of God, we are to love everybody.'"

WCDSB Chair Bill Conway has also put out a statement:

"We wish to clarify that the comments made by Trustee Reitzel about pride as one of the deadliest sins was made in the context of faith and in no way made in reference to the LGTQ2+ community. Trustee Reitzel does not believe a person identifying as LGTQ2+ is a sin, and deeply apologies to anyone that may have interpreted his comments that way.

Trustee Reitzel is in full support of flying the flag developed in conjunction with the other Catholic Boards in Ontario as well as our provincial partners, respecting that Catholic schools are distinct and having a distinct flag that includes an image of Jesus embraces all of His "children". In our Catholic schools all our students are loved by our staff and by our God.  All our trustees believe that as well as supporting the well-being, safety and inclusion of all students and staff in a welcoming environment".

The Catholic school board is also recieving comments from a variety of local organizations, including KW Counselling Services.

In an open letter to the school board, the executive director of KW Counselling Services, Rebecca Webb, says "the Waterloo Catholic District School Board has a huge role to play in the well-being of these young people and so we respectfully ask you to reflect upon your equity and inclusion policies and practices and fly the Pride flag."

You can read the full open letter below.

Today, our Executive Director, Rebecca Webb, sent a letter to Loretta Notten and the Trustees of the @WCDSBNewswire regarding Pride flags. You can read the letter and download a PDF copy of it here:https://t.co/p2ak5kqMkf pic.twitter.com/VRVMt2p5VZ