Hundreds turn out to rally in support of Palestine (updated)

Sounds of car horns, chants could be heard across the region
May 16, 2021 10:26 AM By: KitchenerToday Staff 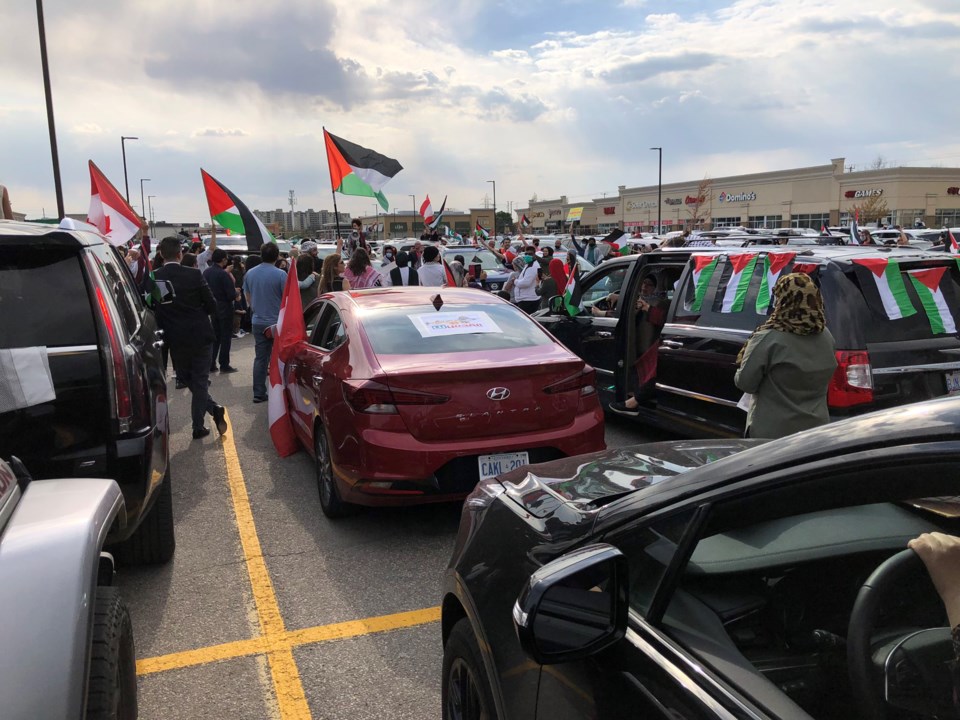 Vehicle horns could be heard across Waterloo Region Saturday evening from a car rally that was organized in support of Palestine.

The rally was locally organized alongside demonstrations that have erupted around the world in support of Palestinians in the Gaza Strip and the escalating violence between Israel and Hamas.

The local rally began at three different locations: Conestoga Mall, the Fairview Park area, and Sir John A. Macdonald Secondary School. Participants from the three meeting points then drove together toward Victoria Park for a bigger rally.

There, a massive crowd of hundreds of people gathered in Victoria Park, in solidarity with Palestine and the thousands of lives lost there. Most attendees were masked and socially distancing, and organizers made a point to remind everyone to abide by public health measures.

According to the Associated Press, the catastrophe is being considered the deadliest strike since heavy fighting broke out between Israel and the territory's militant Hamas rulers nearly a week ago.

The conflict itself stretches back over 100 years and has seen tens of thousands of casualties.

According to Yazan Shaheen of KW in support of Palestine, who helped organize the event, rallies like this are essential for raising awareness, so people "understand what's going on."

"A lot of the mainstream media is not reporting on the situation in Palestine correctly. From what we have seen, it has been very biased reporting, and some are not reporting about it at all," Shaheen told KitchenerToday. "So bringing awareness to the general public in other ways is important to us."

Shaheen said that few people outside of the Palestinian community and their allies know of what's happening in Palestine, and many that do, don't know the full story.

"As troubling and chaotic as rallies can be sometimes, they do draw attention to matters that are important. And from there, it's our job to continue educating people on what's happening in Palestine," he said.

Overall, Shaheen said the rally was a success. Though it was initially scheduled to be in-person, after the Waterloo Regional Police (WRPS) reminded organizers that gathering goes against public health measures, Shaheen said the in-car rally might have gained the event even more attraction.

"It was an amazing success," he said. "It had such a great turn out from everyone in the community. I was blown away by the amount of cars that came out to each location."

WRPS monitored the event, though no tickets were handed out. However, evidence is being collected to assist in issuing tickets for those in violation of the ROA at a later date, according to Cherri Greeno, spokesperson for the WRPS.

There is quite a significant turnout at the 655 Fairway Road start point for the Nakba 73 rally by KW Palestine. There are at least 20-30 cars participating. @570NEWS pic.twitter.com/9NZQe9KFx7

Some kids are following along with bikes. Drivers are honking in support all the way there. The feeling of unity and community is incredible. @570NEWS pic.twitter.com/SgbZFBLwbU