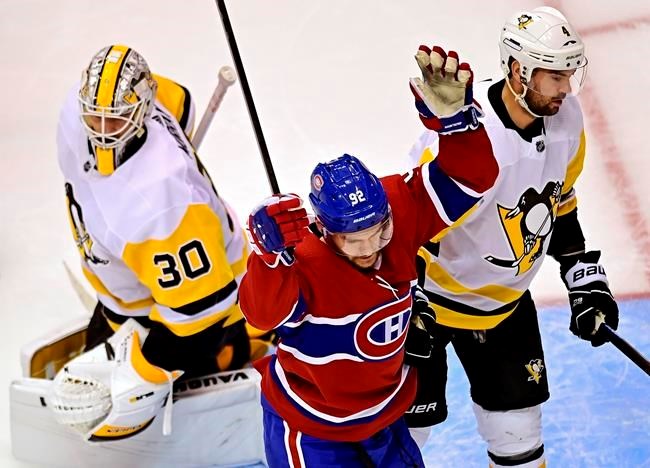 TORONTO — The Montreal Canadiens weren't even supposed to be here.

All but eliminated from playoff contention, they'd shipped out key veterans at the trade deadline and were already squarely focused on next season when COVID-19 forced the NHL shutdown in mid-March.

The league's 24-team restart gave Montreal a second life, and a roster not given much of a chance in this tournament is now one win from adding an incredible chapter to an unbelievable year.

Jeff Petry scored the winner in the third period as the Canadiens fought back from a 3-1 deficit to down the Pittsburgh Penguins 4-3 on Wednesday and grab a 2-1 lead in their best-of-five qualifying round series.

"We've just done it by working hard," said Montreal head coach Claude Julien, who shook up his lines in the second period with his team down two. "At the end of the day, we know where the experience is. The only way we can counter that is with our work ethic and our commitment and desire.

"We lack experience compared to the other team, but we're trying to make it up with our compete level."

Carey Price stopped 30 shots for the Canadiens — the 12th seed in the Eastern Conference as part of the NHL's restart to its pandemic-delayed season — who will look to close out a stunning upset Friday in Game 4 and advance to the normal 16-slot playoff bracket.

Patric Hornqvist, Jason Zucker and Teddy Blueger replied for No. 5 Pittsburgh, which got 27 saves from Matt Murray.

"We just made a few mistakes," Penguins captain Sidney Crosby said. "This time of year, those mistakes are magnified. They're opportunistic. They're waiting for those mistakes and they capitalized on them.

"We might have been guilty of getting a little too loose there with the lead, and that changed pretty quick."

Canadiens winger Brendan Gallagher suited up after briefly leaving the Penguins' 3-1 victory in Game 2, but battled through despite clearly labouring at times with an undisclosed lower-body injury.

"As long as you can help the team, you're going to be out there," Gallagher said. "I would never put myself in a situation where I'm gonna hurt the team."

Tied 3-3 through 40 minutes Wednesday, Montreal's power play that was 0-for-9 in the series came agonizingly close when Joel Armia's one-timer pinballed around the crease.

But the Canadiens kept up the pressure, and Petry, who provided the overtime winner in Game 1, roofed a shot past Murray's ear from a sharp angle at 5:33 of the third shortly after the man advantage expired.

"There's no bad shot and at this time of the year," Petry said. "I was able to pick my spot."

Pittsburgh, which had the seventh-best record in the NHL when the season was halted, went on the power play with 3:32 left in regulation, but Price handled Crosby's one-timer comfortably without giving up a rebound on the only shot against.

The Penguins pulled Murray and continued to press, but weren't able to find a way through.

Pittsburgh led 2-1 after the first, and doubled that advantage at 5:35 of the second when Brandon Tanev beat Victor Mete to a loose puck down the wing. Zach Aston-Reese's effort from the slot was stopped by Price, but Blueger poked the rebound home.

Drouin got that one back for Montreal at 10:13 when he redirected Chiarot's point shot past Murray.

The Canadiens' power play has yet to score in the series, but Byron's equalizer at 15:50 came seconds after Evgeni Malkin exited the penalty box when he deftly manoeuvred Nick Suzuki's rebound from his skate to his stick and snuck a second-effort wraparound just over the goal line.

Montreal, which sat 24th in the overall standings when play was suspended because of the novel coronavirus, jumped in front at 4:57 of the first when Weber fired his third shot of a chaotic sequence by a down-and-out Murray.

The Penguins challenged for goalie interference on Montreal's Artturi Lehkonen, but the call stood after video review, resulting in a Pittsburgh minor penalty.

The Canadiens couldn't connect on that man advantage, and Price, who led Montreal to that overtime victory in Game 1 and kept his team within striking distance two nights later, was soon under fire at the other end.

Already down a man, Weber buried Hornqvist in the corner and was going to be assessed a penalty. Montreal's captain seemed to be waiting for Malkin to give the puck away for a 5-on-3, but he instead whipped a cross-ice pass to Hornqvist, who made no mistake at 8:40.

Pittsburgh stayed on the power play with Weber now in the box, and Zucker made it 2-1 just 59 seconds later when Bryan Rust delivered a sneaky feed in the slot for the winger to rip a shot upstairs.

"You're playing a team that knows exactly what to do to get back into a series," Julien said of the Penguins, who won the Stanley Cup in both 2016 and 2017. "We're aware of that, so we need to be playing our best game come Game 4. We've got to be ready.

"We can't get overconfident, but we've got to have the confidence to be able to close it off."

Notes: Game 5, if necessary, is scheduled for Saturday. ... Pittsburgh centre Jared McCann sat out in favour of Sam Lafferty. ... The Canadiens made one lineup change with Jake Evans swapping in for Jordan Weal on the fourth line. Evans was drilled into the boards by Tanev in the second period and did not return.