ROME — The powerful head of the Vatican's saint-making office, Cardinal Angelo Becciu, resigned Thursday from the post and renounced his rights as a cardinal amid a financial scandal that has reportedly implicated him indirectly.
Sep 24, 2020 3:22 PM By: Canadian Press 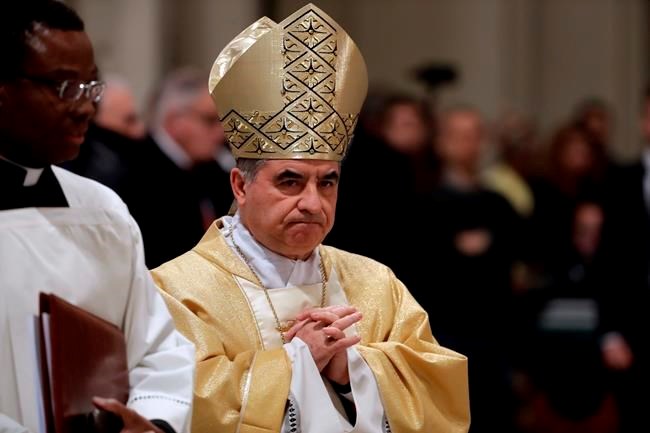 ROME — The powerful head of the Vatican's saint-making office, Cardinal Angelo Becciu, resigned Thursday from the post and renounced his rights as a cardinal amid a financial scandal that has reportedly implicated him indirectly.

Becciu, the former powerful No. 2 in the Vatican's secretariat of state, has been reportedly implicated in a financial scandal involving the Vatican's investment in a London real estate deal that has lost the Holy See millions of euros in fees paid to middlemen.

The Vatican prosecutor has placed several Vatican officials under investigation, as well as the middlemen, but not Becciu. Becciu has denied all wrongdoing and it's not clear whether the scandal, which has convulsed the Vatican for a year, is behind his resignation.

The last time a cardinal’s rights were removed was when American Theodore McCarrick renounced his rights and privileges as a cardinal in July 2018 amid a sexual abuse investigation. He was subsequently defrocked altogether by Francis last year for sexually abusing adults as well as minors.

Before him, the late Scottish Cardinal Keith O’Brien in 2015 relinquished the rights and privileges of being a cardinal after unidentified priests alleged sexual misconduct. O’Brien was, however, allowed to retain the cardinal’s title and he died a member of the college.

In the Vatican statement, the Holy See identified Becciu as “His Eminence Cardinal Angelo Becciu,” making clear he remained a cardinal but without any rights.

At 72, Becciu would have been able to participate in a possible future conclave to elect Francis’ successor. Cardinals over age 80 can't vote. But by renouncing his rights as a cardinal, Becciu has relinquished his rights to take part.

Becciu was the “substitute,” or top deputy in the secretariat of state from 2011-2018, when Francis made him a cardinal and moved him into the Vatican’s saint-making office. He straddled two pontificates, having been named by Pope Benedict XVI and entrusted with essentially running the Curia, or Vatican bureaucracy, a position that gave him enormous influence and power.

The financial problems date from 2014, when the Vatican entered into a real estate venture by investing over $200 million in a fund run by an Italian businessman. The deal gave the Holy See 45% of the luxury building at 60 Sloane Ave. in London’s Chelsea .

The money came from the secretariat of state’s asset portfolio, which is funded in large part by the Peter’s Pence donations of Catholics around the world for the pope to use for charity and Vatican expenses.

The Holy See decided in November 2018, after Becciu had left the secretariat of state, to exit the fund, end its relationship with the businessman and buy out the remainder of the building. It did so after Becciu's successor determined that the mortgage was too onerous and that the businessman was losing money for the Vatican in some of the fund’s other investments.

The buyout deal, however, cost the Vatican tens of millions of euros more and sparked the Vatican investigation that has so far implicated a half-dozen Vatican employees.

Becciu has insisted he wasn’t in power during the 2018 buyout deal and always acted in the sole interests of the Holy See. In the Vatican prosecutor's initial warrant, Becciu is not named, and it remains unclear if his role in managing the secretariat of state's vast asset portfolio was connected with the resignation.

NXIVM guru gets 120 years in prison in sex-slaves case
Oct 27, 2020 8:11 PM
Tennessee school bus carrying children crashes; 2 killed
Oct 27, 2020 7:12 PM
Comments
We welcome your feedback and encourage you to share your thoughts. We ask that you be respectful of others and their points of view, refrain from personal attacks and stay on topic. To learn about our commenting policies and how we moderate, please read our Community Guidelines.