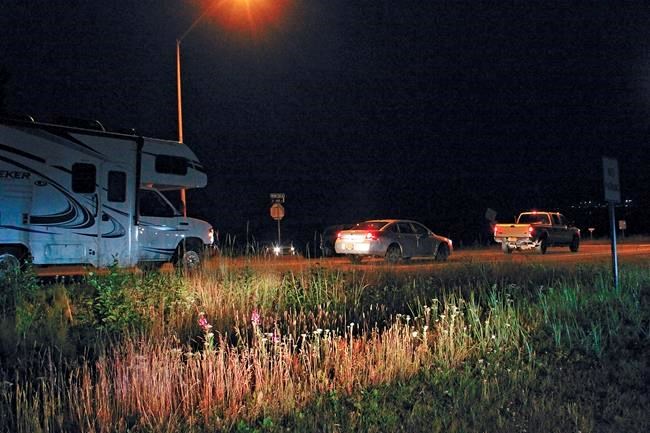 There were no immediate reports of damage in the Alaska Peninsula and the tsunami warning was after the magnitude 7.8 quake offshore created a wave of a less than a foot (30 ).

The earthquake struck Tuesday at 10:12 p.m. local time and was in waters 65 miles (105 ) south-southeast of the tiny community of Perryville, at a depth of 17 miles (28 km), according to the U.S. Geological Survey.

Residents in some small towns within a hundred miles (160 ) of the quake reported very strong shaking and some shaking was felt more than more than 500 miles (805 ) away in the Anchorage area, said Michael West, Alaska state seismologist.

On Kodiak Island about 200 miles (320 ) northeast of where the earthquake was , the local high school and the Catholic church opened their doors for evacuees and the school parking lot was declared a safe zone, with some people staying in their cars with pets until it was safe to go home.

“No reports of any damage,” said Kodiak police Sgt. Mike Sorter. “No injuries were reported. Everything is nominal.”

Such tsunami warnings are commonplace in Alaska coastal communities, similar to tornado warnings elsewhere in the U.S. that prompt people to take shelter.

On Tuesday night, Gerry Cobban Knagin took video of the parking lot scene at Kodiak Aleutian Regional High School, where 300 or 400 other people were sheltering.

By Wednesday morning, she was ready to take part in the intense “Adjust Your Altitude Challenge” hike in Kodiak, the last in a series.

“We adjust quickly here. Life is back to normal,” she said in a Facebook message before heading out to Pyramid Mountain with friends.

At the U.S. Coast Guard base in Kodiak, officials scrambled their planes and helicopters into the air quickly because of the tsunami warning and Chief Petty Officer Timothy Daugherty made sure the 18 officers he oversees were OK.

“The last thing you want to do is work on getting the aircraft in the air as a tsunami hits,” he said. “It's a great drill and great practice to prepare for when we might need to conduct rescues resulting from an earthquake and tsunami.”

Officials at the National Tsunami Warning Center in Palmer, Alaska, began calling off the tsunami advisories and warnings after a wave of less than 1 foot (30 ) was recorded in the community of Sand Point.

“I might have expected a little bit more water, but I’m happy that there wasn’t,” said David Hale, the senior duty scientist at the tsunami .

Tuesday’s quake was more powerful than the magnitude 7.1 earthquake that caused damage in the Anchorage area in November 2018.

“This earthquake released about 15 times as much energy as that earthquake, said West, the state seismologist.

More than a dozen aftershocks of magnitude 4.0 or higher were reported immediately after the earthquake, he said from the Alaska Earthquake Center at the University of Alaska Fairbanks.

The earthquake happened in the so-called Alaska-Aleutian Trench, where a magnitude 9.2 quake in 1964 was .

That remains the second most powerful earthquake ever recorded globally. The temblor and ensuing tsunami caused widespread damage and killed 131 people, some as far away as Oregon and California.

Alaska is the most actively seismic U.S. state. Nearly 25,000 earthquakes have been recorded in Alaska since Jan. 1, according to the .