Ex-guard frees dozens of hostages in Manila mall, is subdued

MANILA, Philippines — A recently dismissed security guard freed dozens of hostages and was subdued by police after walking out of a shopping mall in the Philippine capital on Monday, ending a daylong hostage crisis in an upscale commercial district n
Mar 3, 2020 1:43 AM By: Canadian Press 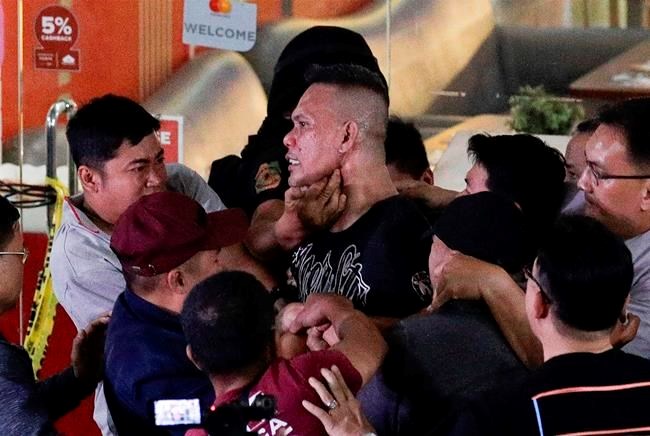 MANILA, Philippines — A recently dismissed security guard freed dozens of hostages and was subdued by police after walking out of a shopping mall in the Philippine capital on Monday, ending a daylong hostage crisis in an upscale commercial district near the police and military headquarters, officials said.

The former guard at the Greenhills shopping , identified by police as Alchie Paray, left the mall in San Juan City in metropolitan Manila with the remaining hostages, who were then secured by police. Several others had managed to escape earlier, police said.

“Everyone is in shock, very traumatized. We’ll have to give them time to recover,” said San Juan Mayor Francis Zamora, who ordered an investigation, including into how the suspect was able to enter the mall with a pistol and grenades.

Instead of being immediately arrested, the suspect was allowed to speak for several minutes to journalists and authorities to describe his grievances against his former bosses, whom he accused of corruption and abuse, before police approached and subdued him.

Zamora said the suspect had a pistol with him when he walked down from a second-floor administrative office where he had held dozens of hostages, many of them mall employees. Other people hid in nearby offices and hallways and escaped in batches, he said.

There were between 60 to 70 hostages and people who were trapped in the mall by the standoff, Zamora said.

"I’m very thankful that everything ended up peacefully,” said the mayor, who negotiated with the hostage-taker to give up his weapons and guaranteed his safety shortly before the crisis ended.

“He was asking if it’s the cemetery or prison and I told him, (Alchie), you’re safe,” Zamora said.

The gunman shot and wounded a security officer at the V-Mall, part of the Greenhills complex, before he rushed to the second floor and took the hostages, Zamora said. The mall officer was in stable condition at a nearby hospital.

The hostage taker was dismissed after abandoning his job in recent weeks without notifying management, Zamora said.

The suspect later used his cellphone to deliver a message to the guards and the media, expressing his anger over a change in his work hours and accusing some of his superiors of corruption.

In a bid to appease the suspect during the hostage crisis, six officers in charge of overseeing the mall's security apologized to him at an early evening news conference for “shortcomings” and resigned or offered to quit.

“I’m asking for his forgiveness, and because of this, I’ll resign from my job so this crisis will come to an end,” said Oscar Hernandez, one of the security officers.

SWAT commandos entered the mall as the crisis unfolded, assault rifles ready. Other policemen stood by outside, along with an ambulance.

The shopping complex, popular for its restaurants, shops, bars and a bazaar, lies near an upscale residential enclave, a golf club and the police and military headquarters in the bustling Manila metropolis of more than 12 million people, where law and order have long been a concern.

Three years ago, a gunman stormed a mall-casino complex in Manila, shot TV monitors and set gambling tables on fire, killing 36 people who were mostly suffocated by the thick smoke. The gunman stole casino chips before he fled but was found dead in an apparent suicide in an adjacent hotel at the Resorts World Manila complex.

The attack was claimed by the Islamic State group, but Philippine authorities rejected the claim, saying the attacker was not a Muslim militant but a heavily indebted gambler.

In 2010, a hostage drama aboard a hijacked Philippine bus ended in bloodshed when an angry ex-policeman demanding his job back gunned down eight Hong Kong tourists before police stormed the vehicle and a sniper killed him.

Associated Press journalists Kiko Rosario in Bangkok and Joeal Calupitan in Manila contributed to this report.