Police said hundreds were inside when the shooting occurred late Wednesday
Nov 8, 2018 6:44 AM By: Associated Press 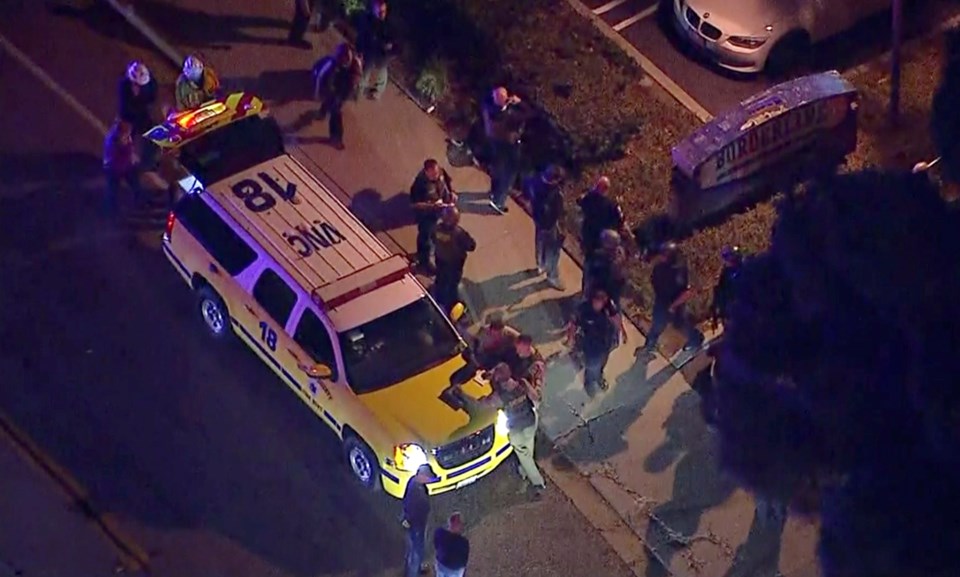 This image made from aerial video show officers around a Police SUV in the vicinity of a shooting in Thousand Oaks, California, early Thursday, Nov. 8, 2018. Authorities say there were multiple injuries - including one officer - after a man opened fire in Southern California bar late Wednesday. (KABC via AP)

A sheriff says 13 people are dead, including a sheriff’s sergeant and the gunman, after a shooting inside a crowded Southern California bar late Wednesday.

Ventura County Sheriff Geoff Dean says sheriff’s Sgt. Ron Helus responded to the scene and was shot after he entered the building. He died at a hospital early Thursday.

Authorities did not say how the gunman died.

Dean says around 10 other people were shot and wounded. No other information on the victims was immediately known.

Ventura County Sheriff’s Office Capt. Garo Kuredjian said the first reports of shots fired came around 11:20 p.m. at the Borderline Bar & Grill in Thousand Oaks, which is about 40 miles west of Los Angeles.

The bar’s website says its hosts “College Country Night” every Wednesday. Police said hundreds were inside when the shooting occurred.

Tayler Whitler, 19, said she was inside the bar when a gunman walked in with his face partly covered by something resembling a ski mask, opened fire on a person working the door, then began to shoot people at random.

“It was really, really really shocking,” Whitler told KABC-TV as she stood with her father in the Borderline parking lot. “It looked like he knew what he was doing.”

It has been “quite some time” since there was a shooting of any kind in Thousand Oaks, a city of about 130,000 people about 40 miles (64 kilometres) west of Los Angeles, just across the county line.

Nick Steinwender, student body president at nearby California Lutheran University, rushed to the scene when he heard about a shooting at the bar where he knew friends and fellow students were inside.

“It was chaos, people jumping out of windows, people hopping over gates to get out,” Steinwender told KABC.

He said he heard from people inside that they were hiding in bathrooms and the attic of the bar.

Neil Young sues Trump campaign, deriding use of famous tunes
Aug 4, 2020 6:34 PM
Comments
We welcome your feedback and encourage you to share your thoughts. We ask that you be respectful of others and their points of view, refrain from personal attacks and stay on topic. To learn about our commenting policies and how we moderate, please read our Community Guidelines.