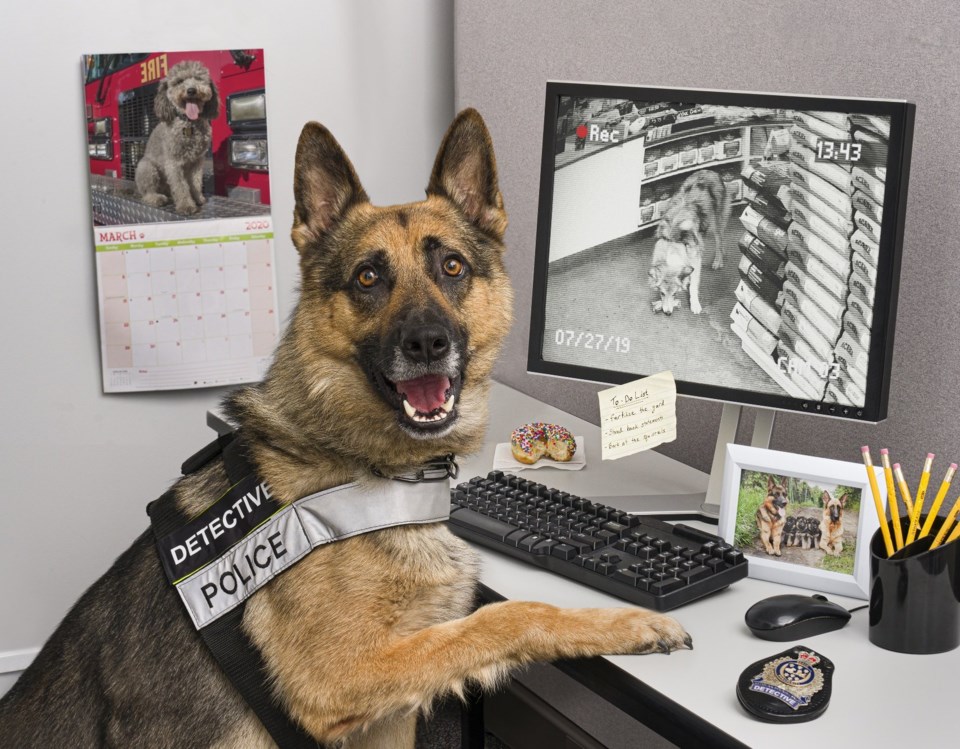 “Our canines are trained to support officers in many different types of investigations or matters. They are a very important part of our service and a value to our community. The canine handlers work as a team with their dog and form a special bond,” said Cherri Greeno, Manager, Corporate Communications and Public Information Waterloo Regional Police Service.

The German Shepherd (GSD) is a large-sized working dog originating from Germany. They are extremely intelligent and with proper training can be obedient, curious, loyal, confident and courageous. A police service dog is extremely active and requires a special diet to meet its increased demands.

Currently, WRPS has four canine teams. A team consists of one dog and one handler – officer. The canine and the officer spend day and night together, creating a special bond, the “dog becomes part of the officer’s family, living and working side-by-side.”

Why are GSD used as police dogs? Size and athleticism. The GSD is large enough to take a person down, restrained enough to know when force is necessary and obedient enough to listen to commands when instructed to let go.

Most recently, Chase tracked down a male with stolen property who ran from officers, as well as locating a person who was in crisis in a wooded area. Tracker helped officers locate a wanted male who was running from police, he also helped locate the driver from a stolen vehicle that fled after being involved in a single vehicle collision. During a break and enter, Grim searched a residence and found the suspect hiding. Ranger tracked down a wanted female who had been hiding from police.

“They help in several different types of investigations. Earlier this year, Constable Marissa Zuliani and Canine Grim helped locate a missing child who had wandered off into a field. Grim was able to conduct a track and ensure the child's safe return,” says Greeno.

Over the years, the handler and the dog form a special relationship. When the canine retires, depending on health status, they tend to remain in the home of the officer, as part of the family.

When Grim, Ranger, Chase and Tracker aren’t on duty, they are always looking for ways to give back to the community. This fall, police announced they would be launching a Canine Calendar, supporting Special Olympics Ontario and the 2020 Spring Games.

"The 2020 calendar features the Service’s four canines with their handlers, and documents their work as they attempt to solve a case of stolen dog bones," according to a WRPS news release.

“We are excited to launch this calendar as a fun way to not only recognize the great work of our Canine unit, but as a way to support the talented Special Olympics Ontario athletes,” said Bryan Larkin, Chief of Police.

The games will be held in May, 2020, for the first time in Waterloo Region, hosted by WRPS. More than 2,000 athletes are expected to take part.

You can purchase one of the 2020 Canine Calendars here or in-person at police headquarters (200 Maple Grove Rd, Cambridge). Canine teams have also been visiting local pet stores to promote the calendar.

Waterloo singer-songwriter one of Canada's top independent artists
Feb 10, 2020 9:00 AM
Comments
We welcome your feedback and encourage you to share your thoughts on this story. We ask that you be respectful of others and their points of view, refrain from personal attacks and stay on topic. To learn about our commenting policies and how we moderate, please read our Community Guidelines.