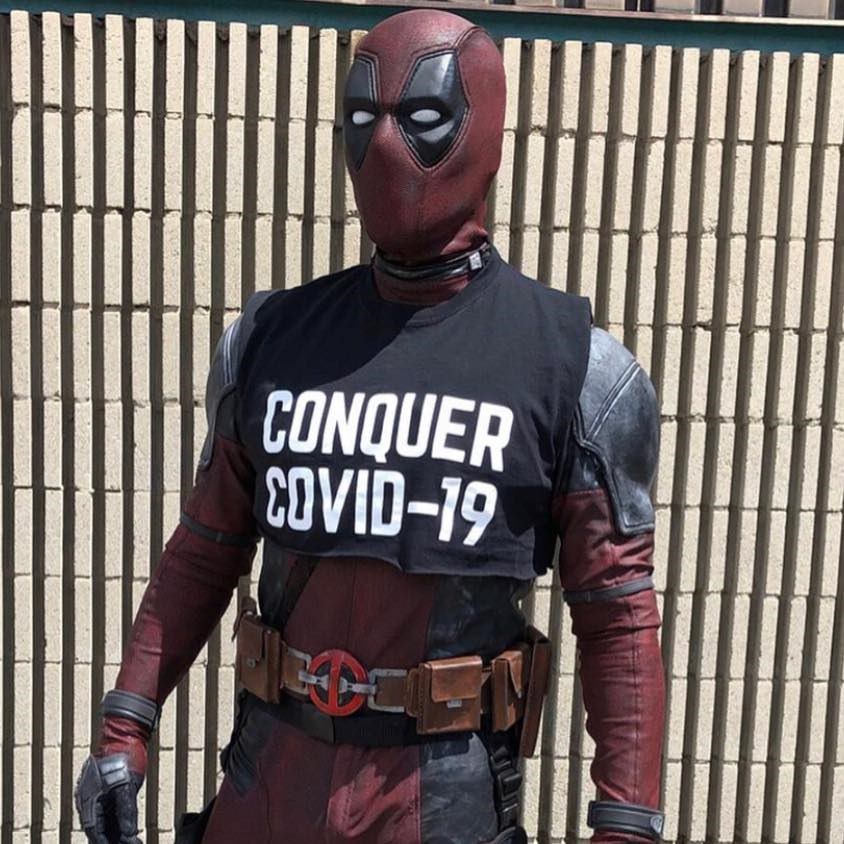 Self-described superhero Deadpool4Good understands the debilitating fear caused by domestic violence. He has made it his mission to advocate for children in the region.

He describes living in fear of the violence his step-father brought into their home. “I saw the bruises and blood,” he says. Often he would go to bed at night hoping something would happen to the man who habitually hurt his mom.

His mother would bravely escape with her children out of a situation he describes as hell. “Regardless of how uncertain their future would be, she did it, and I am so thankful to her for that,” he said.

The costume would start as a Halloween outfit in 2018. He soon realized that by wearing the suit, people were drawn to him, they wanted to hear what he had to say. He began using this opportunity to deliver his anti-bullying messaging.

“People will go out of their way to engage in banter, take pictures and ask questions. I use that to provide some entertainment but also direct attention to my awareness mission,” he says. “The idea that by suiting up, you could become a conduit for change was the spark for me.”

Since then, he has upgraded the suit to what he refers to as a movie quality outfit, to satisfy even the most intense Deadpool superfan. He says he is in no way affiliated or endorsed by Marvel or Disney.

The restrictions and isolation caused by the current pandemic concern him. “Previous windows of relief - school, errands, sports - have been boarded up. I feel for those suffering during this time, and I hope they can find a safe place.”

When asked why he chose Deadpool, he says, despite his imperfections, he has a reliable moral code. “He represents many things we might see in ourselves. Plus, he is a sarcastic and witty character that is tough not to like.”

In his regular life, he’s a husband and father to three children - someone, he says, who wouldn't likely stand out in a crowd."If I can bring a smile, make someone pause from their stress for a bit, then I have accomplished my goal. When I can help a worthy cause along the way, it keeps me focused and motivated."

Most people he runs into are visibly in awe, drawn to find out more – although some have also clutched valuables while crossing the street. He’s gotten used to being called Spiderman, too.

“Ironically, I have even been bullied while out as Deadpool,” he said.

But the pros outweigh the cons for Deadpool4Good. His highlight reel includes time spent with childhood cancer survivors and engaging with fans at sporting events. He admits to riding elevators to see the reaction he gets when the door opens.

Over the past two years, he has donated his time to causes across the region such as Farwell4Hire, Stand Together Against Bullying, Cancer Society's Relay for Life, Kitchener Kids with Cancer Run, The Doctor Who Society for Grand River NICU, 501st Legion and Charity and Conquercovid-19.ca, among others.

He recently created a Maximum Effort Against Violence GoFundMe. Funds raised will go to  Women's Crisis Services of Waterloo, a cause he holds close from his experiences as a child.

Struggles of the city
Jul 20, 2020 1:59 PM
Comments
We welcome your feedback and encourage you to share your thoughts. We ask that you be respectful of others and their points of view, refrain from personal attacks and stay on topic. To learn about our commenting policies and how we moderate, please read our Community Guidelines.