"I never hesitated at this dream despite it being male-dominated and getting questions like, 'why don’t you just be a flight attendant or work in the office?'”
0
Sep 9, 2019 1:30 PM By: Natasha McKenty 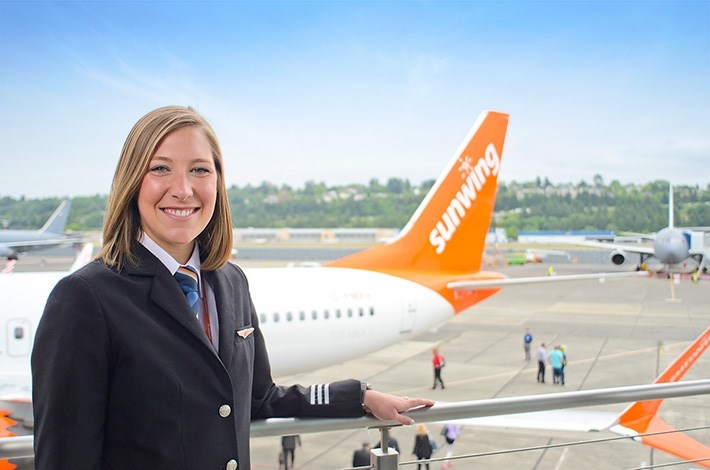 Jessalyn Teed, a 24-year-old First officer at Sunwing, says this stat drove her passion to see this value increase and not let it hold her back. “I went for this goal despite the numbers.”

She remembers the exact moment she fell in love with flying. She was just eight-years-old and took part in a free flight, thanks to a Young Eagles program at a Muskoka airport. “From that day, I claimed that when I grow up, I’m going to be a pilot,” she says.

In a industry where 94% of pilots are men, girls often don’t have exposure to female role-models – Teed felt driven to become that mentor.

“From being fed as a baby with a little airplane spoon, to grade 10 Careers class – I didn’t let anything change my mind.”

She would spend her high school years connecting with other pilots, in search of any opportunity to go up. She attended every local airshow and often hunkered down at the end of the Region of Waterloo Airport runway, to watch planes.

“I looked for communities that supported my same passion – to see more women in aviation. Waterloo Wellington Flight Centre (WWFC) caught my attention the first day I walked in and spotted their plaque, ‘Voted Most Female Friendly Flight Centre.”

Soon after graduating from University of Waterloo (UW), with a degree in environmental studies and aviation, she would earn her place in the Sunwing Cadet program.

During her studies she held three part-time jobs, including working dispatch at WWFC, a teaching assistant and residence assistant at UW.

“I grew personally, building confidence in myself. I learned how to be a Pilot in Command and gained a classroom-based knowledge in meteorology, navigation and air law. She admits that it came with setbacks and challenges, but with mentorship and support from the aviation community she was able to see each moment as a learning experience.

Her training at Sunwing began in September 2017 and by the end of October she had completed her Boeing 737 Type Rating. In a matter of weeks, she’d gone from Cessnas to jets.

“I was so full of excitement and nerves on that first takeoff,” she says. She remembers her Captain turning to her and saying, “Jessalyn, you have control and remember to breathe.” The girl who fell in love with flying, in a two-seater plane, was now First Officer of a 737 Jet – with 189 people onboard.

Since then, she earned WINGS Top 20 Under 40 for 2019 – recognizing inspiring young leaders who influence the Canadian aviation and aerospace industry, along with the Jazz Aviation Pathway Award, Hamilton Watch Top Performance Award and Northern Lights Aero Foundation Rising Star Award.

Knowing growth in aviation will be stunted unless more women are encouraged to become pilots, she helped create a Sunwing Mentorship Program. The goal, to partner experienced pilots with new grads.

Caroline Rose, Marketing Manager with WWFC says, “this year about 25% or our students are female.” A positive sign for the future of women in aviation.

Looking to the future, Teed says she loves flying big commercial aircrafts, “I look forward to the opportunities ahead, being able to shape the training and workplace experience for the next generation of aviation professionals.”

“My mentors came alongside me to offer guidance, tools and a listening ear. This is something I give so much credit to when it comes to where and how I have gotten to where I am today. In turn, my hope is to provide the same relationship for others.”

Inspired youth: Bridges of Hope creator has big plans for 2020
Jan 6, 2020 1:30 PM
Comments
We welcome your feedback and encourage you to share your thoughts on this story. We ask that you be respectful of others and their points of view, refrain from personal attacks and stay on topic. To learn about our commenting policies and how we moderate, please read our Community Guidelines.