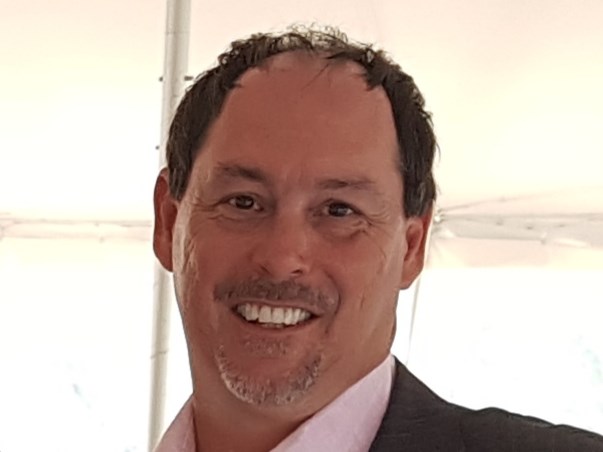 Having joined the Child Witness Centre (CWC) just months before the pandemic hit, he's relatively new to the role. "I had been mulling a change for a little while," Executive Director, David Morneau said, "20-years of practicing law on your own does take a toll."

As a child, his mother would foster an interest in true crime, leading him to seek a future in criminal law. Morneau says the offer to match donations is in honour of his mother, who passed away suddenly in April.

During a law school project, he became interested in what was referred to as holistic law – assisting people in navigating through their legal troubles.

Morneau married the girl next door and jumped headfirst into a career. "Seriously," he laughs, "Andrea grew up right across the street from me."

As a practicing family lawyer, he noticed a pattern, typically impacting children the most. He says, "I liken the litigation process to a hurricane, it sweeps in and leaves a path of destruction and then moves on - leaving the impacted family to pick up the pieces."

While working for the Attorney General, through the Office of the Children's Lawyer, he would represent minors in court cases involving custody and access to child protection. He started to see there was a better way to handle situations where families were in transition.

"In the last six years of my practice, I stopped litigation almost entirely and maintained representing children.  I felt that I could have a positive impact on the outcome, providing the child's views and preferences, and focusing on mediation and collaborative law."

Stepping aside from his private practice in December 2019, he evaluated that the approach to family law had evolved, and he hoped that he had influenced that change in some small way.

Reflecting on current world events, he says, as a society, we can do better. "We have difficulty with civil discourse. We judge each other too quickly and often too harshly. We never know what that other person has been through, this becomes especially true when we factor in social media," he said. "We need to be better to one another. Kinder. We can disagree without disliking and still move forward for the greater good."

Morneau wants to make a difference, but not just for his organization. "I know that there are so many charitable and not-for-profit organizations doing amazing work, and to show my gratitude and appreciation, I will donate $50 to a charity or not-for-profit of some of the donor's choosing - up to $500."

Although there has been a decrease in the number of reports of child abuse, he said, "we do expect a surge in the number of investigations and charges related to violence against children as the days, weeks and months pass, particularly as the restrictions ease and doors and windows open. Also, because the courts have operated at limited capacity since mid-March, the number of young people we represent has grown, but little has been resolved. We are concerned about our capacity to keep up with our demand once we start to return to normal operation."

As part of the Spring Appeal, for each donation made to the Child Witness Centre, Morneau plans to match the first $1,000 raised. Visit www.childwitness.com for more information.

If you are aware of a local youth in immediate danger, please contact Waterloo Regional Police, Women's Crisis Services of Waterloo Region or Family and Children's Services.

Pre-teen entrepreneur pushing buttons for a good cause
Jul 27, 2020 12:15 PM
Comments
We welcome your feedback and encourage you to share your thoughts. We ask that you be respectful of others and their points of view, refrain from personal attacks and stay on topic. To learn about our commenting policies and how we moderate, please read our Community Guidelines.