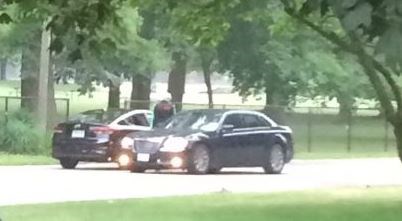 Two vehicles were seen leaving the area after a shooting on July 18, 2019. (Brantford Police)

Brantford Police continue to investigate a double homicide in that city.

Police were called to investigate a shooting incident on Park Road South on Thursday just before 8 a.m

A man and woman were found suffering from gunshot wounds and were pronounced dead at the scene.

The victims have been identified as Larry Reynolds, 64, and Lynn VanEvery, 62.

Police say there were other individuals inside the residence at the time of the shooting, but they were not injured.

Brantford Police say they do not believe it was a random act of violence.

Police have released a description of one suspect - a male wearing all black with a balaclava covering his face.

They have also released video, and descriptions of two vehicles seen leaving the scene.

BPS is releasing a video which captures a suspect involved in the Park Road South Homicide. Anyone with information is encouraged to contact police. https://t.co/GogQMpba9S via @YouTube

Story by 680 NEWS with files from Erin Anderson

Stratford police investigating string of fires
Jul 26, 2020 8:29 AM
Comments
We welcome your feedback and encourage you to share your thoughts. We ask that you be respectful of others and their points of view, refrain from personal attacks and stay on topic. To learn about our commenting policies and how we moderate, please read our Community Guidelines.