Intersection elimination on its way for Hanlon Expressway 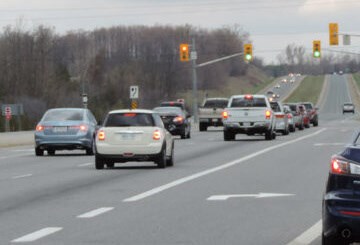 The province is planning to remove two at-grade intersections along the Hanlon Expressway, near Hwy. 401.

Speedier access to and from Hwy. 401 is coming. On Thursday, the provincial government announced it has issued a request for proposals to remove two at-grade intersections along the Hanlon Expressway near the highway.

“Our government is making smart investments in highways, roads and bridges to strengthen and expand our highway network,” said Caroline Mulroney, Minister of Transportation, in a news release. “We are one step closer to constructing the next phase of this essential work to make our roads safer, alleviate traffic congestion throughout the communities of Morriston and Aberfoyle, and to help this important region grow.”

Interested bidders from the expression of interest phase will be shortlisted this week and invited to submit proposals for design and construction, the release explains. Those proposals will be reviewed by Ministry of Transportation officials following closure of the submission process in October, with construction expected to begin in late 2022.

The new interchange is expected to enhance safety and capacity along the Hanlon Expressway, the release continues. Removal of the at-grade intersections is needed in support of future interchange improvements at Hwy. 401 and Hwy. 6 N.

The Hwy. 6 corridor through Morriston is considered one of the busiest two-lane highways in Ontario with average daily traffic volumes of 23,000 to 26,000 vehicles per day.

Ontario Place transforming into 'year-round' attraction, Budweiser Stage to get makeover
Jul 30, 2021 10:35 AM