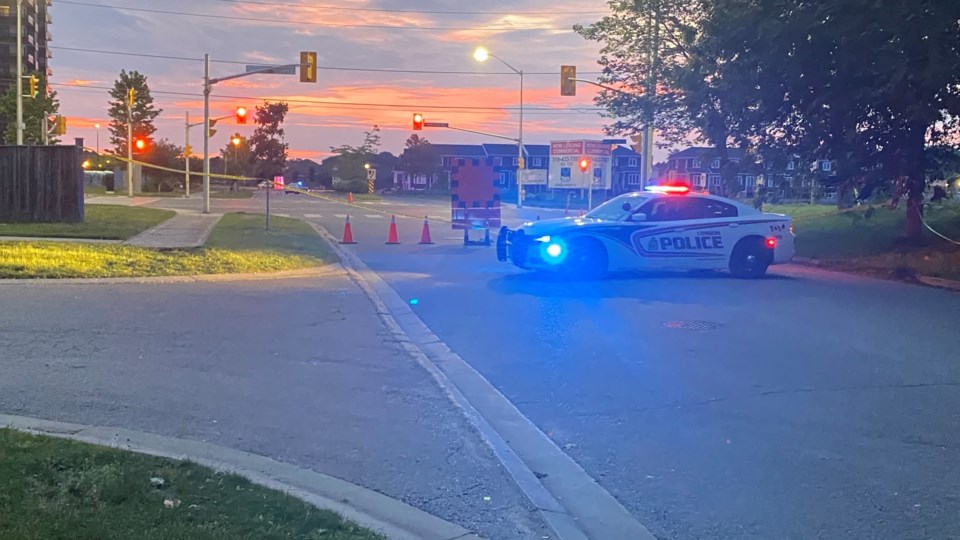 London, Ont., police at the scene after multiple people were hit by a vehicle, June 7, 2021CITYNEWS/Bryan Carey

London Police have identified four victims, all of the same family, that were struck and killed on Sunday in what investigators believe was a targeted attack in a hate-motivated incident against Muslims.

A 9-year-old, the sole survivor, remains in hospital with serious injuries.

Officers said Monday that it’s believed the suspect intended to harm the family in what investigators are calling a premeditated attack, motivated by hate.

The London Police Service wrote in a release that the incident occurred at the intersection of Hyde Park and South Carriage roads.

One adult female who was struck died at the scene, while an adult male, adult female, and two children were rushed to hospital by paramedics.

The two adults and one teenaged child later succumbed to their injuries.

Police arrested a 20-year-old man from London a short time later near Oxford Street West and Cherryhill Boulevard. He remains in custody and there is no word yet on any charges.

The investigation is ongoing and anyone with further information is being asked to contact police.

A woman who witnessed the crash that left four people dead in London, Ontario, says she can’t stop thinking about the victims.

Paige Martin says she was stopped at a red light yesterday evening when a large, black truck came up behind her and flew past at high speed.

A few minutes later, she came upon a gruesome scene at an intersection near her home.

Martin said her car shook from the force of the passing truck. “I was shaken up, thinking it was an erratic driver,” she said.

A few minutes later she came upon a gruesome scene at an intersection near her home.

First responders in full sprint, a police officer performing chest compressions on one person and three others down on the ground.

Martin said there were a few dozen people on the sidewalk, and several drivers got out of their cars to help.

“I can’t get the sound of the screams out of my head,” Martin said.

She went home and from her apartment, she could see the scene. Around midnight she watched an official drape a sheet over a body.

Blue evidence markers on the ground dotted the intersection and officers were performing line searches for several hundred metres in the field next to the sidewalk.

In Waterloo Region, the Coalition of Muslim Women of K-W announced it is planning a virtual, community vigil for Tuesday night at 6 p.m.