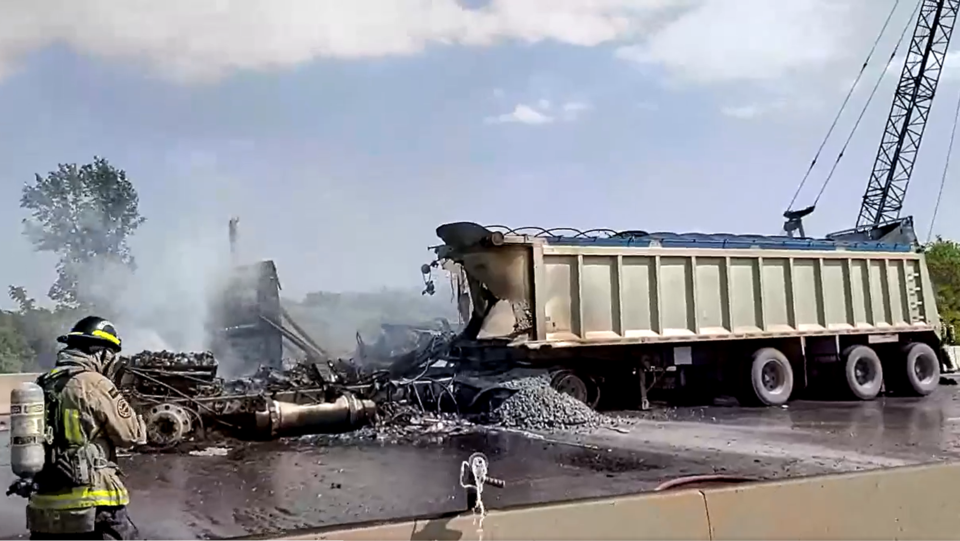 A fiery collision in the eastbound lanes of the 401 closed the highway on Tuesday.

It happened at around 3:30 p.m. in the area of Trafalgar Road, and fire crews had to close both directions of the highway to contain the blaze.

Schmidt also said one tractor trailer had dangerous goods inside, and the other was transporting gravel.

Westbound lanes reopened at around 5:15 p.m., and the Ministry of Transportation reported that one eastbound lane opened around 6:00 p.m., then closed the eastbound highway around 15 minutes later.

"We'll get this fire under control, then we'll start dealing with the cleanup and recoveries, and removal of the vehicles before the highway can be reopened," said Schmidt during the incident. "There's also a possibility that there may have to be resurfacing done on the roadway before the highway can be reopened, just because of the extreme heat."

There's no word on what caused the crash, and there is an active construction zone in the area.

Stratford residents raise concern over proposed float glass factory, environmental impact
Nov 25, 2020 6:00 AM
Comments
We welcome your feedback and encourage you to share your thoughts. We ask that you be respectful of others and their points of view, refrain from personal attacks and stay on topic. To learn about our commenting policies and how we moderate, please read our Community Guidelines.