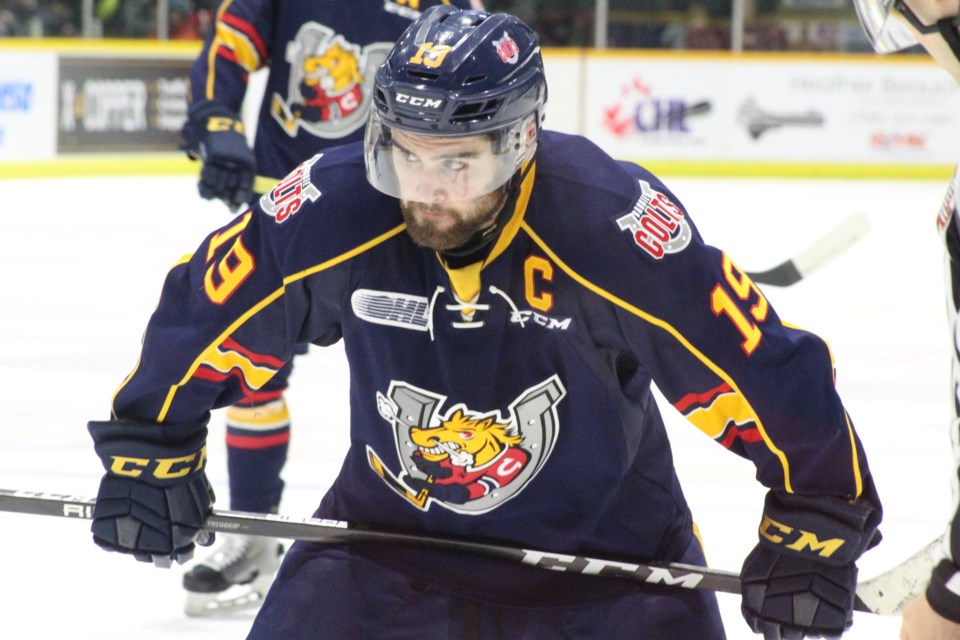 As an abrupt an ending you'll ever find to what could have been in the OHL.

Willms' OHL career came to an end this week, when the Canadian Hockey League announced the playoffs and Memorial Cup would be cancelled for 2020 because of COVID-19 concerns.

It also marked the end of his impressive ironman streak of 264 straight OHL regular season games played, coming just eight games shy of the record of 272 straight held by Bobby Chaumont, who played in Sudbury in the early 2000's.

But Willms does join Chaumont in that elite category of never missing a game in their time in major junior.

"A lot of treatment before and after," he said about his longevity, "My trainer in Barrie, Jimmy McKnight, as well as here in London Doug (Stacey), has done an excellent job preparing me for games.  At the start of my career, I never could've imagined playing in as many games in a row as I have, but I've been pretty lucky to be injury-free, and suspension-wise too."

And when it's not them during the season, Willms says he does his summer training with Rangers Director of Sports Science and Development Coach Brandon Merli.

"It's an all-year round thing nowadays," he said, "I think for me at the end of the year, I really like to work on regaining strength, especially when you go on long playoff runs, your body gets pretty beat up and it could be easy to lose some muscle mass."

"My first couple months of the summer, I always really focus on regaining that strength and everything, and the last couple months (is) when you amp up the on-ice type training."

"I've been lucky so far that I kind of found what works for me, and what works best for my body, and that's kind of what I've gone with."

Offensively, Willms has shown he can produce, even in his days with the Kitchener Jr. Rangers, playing at a point-per-game pace.

The Colts would draft him in the third round of the 2015 OHL Priority Selection, and he took his talents to the Kitchener Dutchmen (GOJHL) in 2015-16, where he netted 23 goals and 42 points in 50 games (again, ironman).

When he moved up to Barrie, he excelled and improved his game, popping 13 goals in his rookie campaign and 27 a year later.

In 2018-19, the Colts named Willms their captain, a distinction he'd hold on to until he was traded to the London Knights just before the trade deadline in January.

"Obviously growing up in Kitchener and heading to The Aud on Friday nights, it's kind of a cool feeling to be on the cross 401 rivalry," Willms said, "When I first got traded, there was obviously a lot of excitement to go to a contending team, a team with as good of a past record as the Knights."

He'd help the Knights to a Midwest Division title, and the top seed in the Western Conference.

For his OHL career, Willms accumulated 82 goals and 181 points in those 264 consecutive contests.

The goal for Willms is to obtain a professional contract, and he believes he has the tools to step up his game in the fall.

"I like to think I'm a two-way, 200 foot type player, some one whose strong on the face off dot, and also somebody who can contribute offensively," he said.

"For me, when the trade (to London) happened, I knew that one of my responsibilities here was going to be reliable in the D-zone, being the guy who can go up against other teams' top lines and shut them down, and also contribute offensively."

"I like to think I can contribute in all areas."