Matt Hall is looking for his second USports Championship after claiming a national title in 2016
Mar 4, 2020 10:00 AM By: Mark Pare 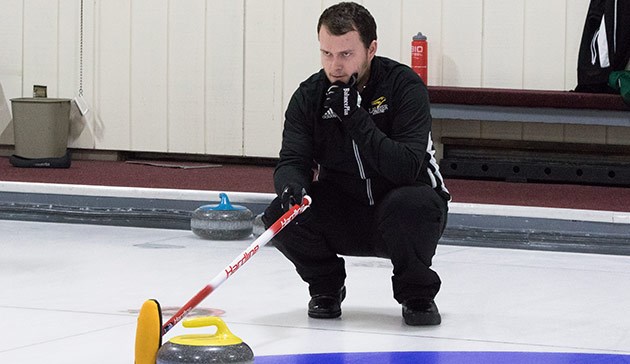 For those who don't know Kitchener native Matt Hall, there's a couple things that stick out when you first talk to him.

One, he's passionate about the game of curling.  And two, he doesn't seem concerned about individual accolades.

Speaking to him ahead of the U Sports/Curling Canada Championships --- where he will lead a Laurier Golden Hawks men's curling team into battle March 11-15 in Portage la Prairie, Manitoba --- he seems more excited for his teammates to get a crack at national glory.

But don't think for a second the three-time OUA Champion and 2016 CIS Champion isn't pumped for another opportunity.

"It never really gets old," he said, "I've been fortunate enough to have a couple cracks at it before, but for some of the guys on the team, it's their first or second and I'm super excited for them to get that experience."

"It's always a unique experience each one you go to, and just happy that they're going to get the chance to do that."

"We all played against each other for a number of years prior to this, but really none of us had ever played together," Hall said of his current squad, "So we put a lot of time into our team dynamics and our communication, and I think that's what really sort of helped us get to the top of the OUA's."

And reaching the national stage, Hall says the big key for those not used to the spotlight is to manage expectations and the atmosphere presented by being in an arena instead of a curling hall.

"It's so different playing in an arena, where it's such an open atmosphere and things can get pretty loud out there with fans, and all the other games going on," he said, "I think just keeping your expectations low, just taking it one game, one shot at a time and try to stick to the process of what got you there."

A good voice to listen to, and not just for Hall's resume at the university level.

The fourth-year math student --- who indicated he has filed his application to pursue a master's degree --- won a World Junior Curling Championship in Liverpool last year, is a multi-time Ontario Junior Champion and skips a team on the World Curling Tour.

Not to mention the sport is in his DNA.

"I think it's a bit of a family affair for me," Hall said when asked about his love of the game, "We were a hockey family when I was really young.  Both my brothers played house league and a little bit of Junior 'A' rep hockey, but I never really enjoyed it."

"My dad was a curler.  He was just playing in a work league at the time, so that's how I kind of got into it and both my grandparents used to curl when they were younger so they would always come out and watch me and support me."

"I think it's great to have that sort of family support behind you, and a little bit of history in the family, in terms of curling and I think just that connection there just really makes it a little more special for me."

"At the time, I was just starting curling and he had won the Canadian juniors and seeing that experience of a Canadian championship from your home club and seeing someone that seemed so local and that you know pretty well go on and play at a World Championship, those are the kinds of things you live for," he said.

"It's what really sparked me and wanted me to get that experience, to go and play at that national level as much as I can."

Hall says it'll always be a struggle to balance work, school and curling life.  But he has no plans to hang up the broom, and dreams of competing at major curling tournaments, such as the Brier and the Olympics.

"I love curling, I have no plans of ever stepping away or ever stopping, but I also realize that you've gotta take it with a grain of salt that you never know where life's going to take you," he said, "So I'm going to do everything I can to continue curling at the highest level that I possibly can, but I put a lot of focus on my school and my work as well outside of that."

"I'm just going to keep doing what I'm doing to find that balance, and get as much of the opportunities as I can to curl, and try to adjust to that experience, with possibly a master's degree in the future."

And possibly a second national championship as well.