After a playing career that took him all over the world, Johnson is now in his second full season as coach of the KW Titans
0
Feb 26, 2020 1:15 PM By: Mark Pare 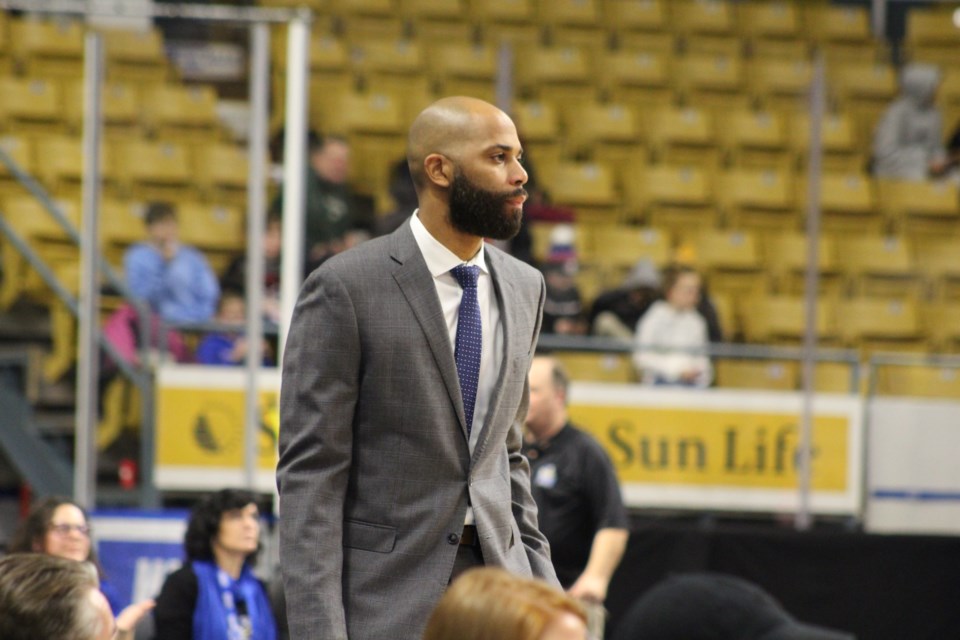 It wasn't the path he thought he'd be going down, but in his own words, Cavell Johnson is not one to turn down a challenge.

The head coach of the KW Titans had quite the basketball career as a player, one that's taken the Fort Washington, Maryland native all over the world, from Finland to Hungary, China and Greece between stints in Canada, where he now calls home.

"I've gotten acclimated to the weather, the pace of life in KW is perfect for me," he said, "I grew up on a farm, and then most of my adult life was outside of Washington, DC, so KW is the perfect mix."

Johnson, 34, was no stranger to NBL Canada when he headed to the Titans as a player for the team's inaugural season in 2016-17.

Following a stint in the now defunct American Professional Basketball League in 2011-12, he played the following year for the Saint John Mill Rats (now Saint John Riptide) and the next two years with the Brampton A's.

"My favourite player growing up was Kevin Garnett," he said, "I took a lot of pride on the defensive end of the floor."

"I like to play above the rim, I've always been a pretty good leaper, had a pretty solid mid-range game and towards the later parts of my career, really just tried to embody what ever was needed from me on any team that I was on, always a team-first mentality."

The NCAA Division I alum went to Europe afterwards, but found his way back on this side of the Atlantic, playing a season with the Titans.

It was during that season, February 26, 2017, that Cavell's world flipped upside down when he lost his brother Aaron to suicide at the age of 30.

Describing it as "the most difficult situation I've ever been in in my life," Johnson says he learned the importance of keeping himself in a positive mind space as much as possible, despite knowing the obvious difficulty of the task.

"My brothers and I were extremely close growing up and in our adulthood, and to face adversity like that, and to have to figure out how to pick up and keep going on in life, I have to keep myself in a very positive mind space because it's a pretty difficult thing to go through and try to learn to cope with," he said, "And then when it gets difficult, when it gets too overwhelming or overbearing, rely on the support system around you."

"Especially because of Aaron's mental health issues, he dealt with depression that I didn't know of before he passed.  I think it's more so important now to confide in the people that we're close to, to allow them to help pull us up or push us forward."

(CLICK HERE for a list of phone numbers and websites of supports you can find in Waterloo Region.)

After the season, Johnson went back home to the US to contemplate his future.

"I was considering retiring," he said, "I moved back home and in the process of joining the army and I got a call from the coach (Serge Langis) to come back and be a veteran presence, a veteran leader for the team that was struggling at that point in the season to get wins."

After playing two games in 2017-18, and the team facing a 5-22 record and playoff hopes dwindling, Johnson was sat down by the ownership group and offered an opportunity to transition into coaching.

"The ownership group informed me that they had always seen some leadership qualities that they liked," he said, "And I'm not one to turn down a challenge, so I stepped up to the plate and coached the last 13 games of that season, and I got the contract extension the following year."

It's a challenge he has embraced head-on, and has learned important lessons along the way.

Among them, he says time management is a big key to the role.

"I think that process of knowing that I was learning on the job, knowing that there was going to be a lot of difficulties, a lot of adversity," he continued, "Just keeping myself in a really present head space to allow the guys around me, players, the veteran players included, to help us steady the ship and right the ship at any given time."

And there is no specific coach that he models himself after, opting for his own approach, his own flavour when it comes to a coaching style.

But he says Jam Mahlalela, head coach of the Raptors 905 squad in Mississauga, has been extremely helpful.

Now into his second full season as the Titans coach, he admits there's been some struggles, from a long list of injuries to players and a 6-13 record to this point.

But he says the role has been enjoyable.

"There's been a lot of adversity," Johnson says, "But I'm just trying to continue to grow and learn as much as I can."

KW may not be his final stop either, as he indicated he's open to exploring the path of coaching in the NBA G-League, or even the NBA someday.

But there's no concrete action plan, as Johnson is allowing his faith to help direct him along the way.

"I would say that I let God direct me a little bit more now in my life because I'm trying to forge my own path," Johnson said, "I was going to join the army, and God picked me up and placed me here in KW."

"(Coaching) was not something that I was necessarily pursuing, so I just want to give as much as I can of myself to this role, and what ever role I find myself in going forward.  And while I'm doing that, continue to push myself outside of my comfort zone, to grow and to develop as a professional basketball coach."

Local swimmers with Olympic dreams
Mar 18, 2020 5:00 PM
Comments
We welcome your feedback and encourage you to share your thoughts on this story. We ask that you be respectful of others and their points of view, refrain from personal attacks and stay on topic. To learn about our commenting policies and how we moderate, please read our Community Guidelines.