Allensen all in on OHL playoff run

Waterloo native Nathan Allensen is into his third season with the Barrie Colts
Mar 11, 2020 12:15 PM By: Mark Pare 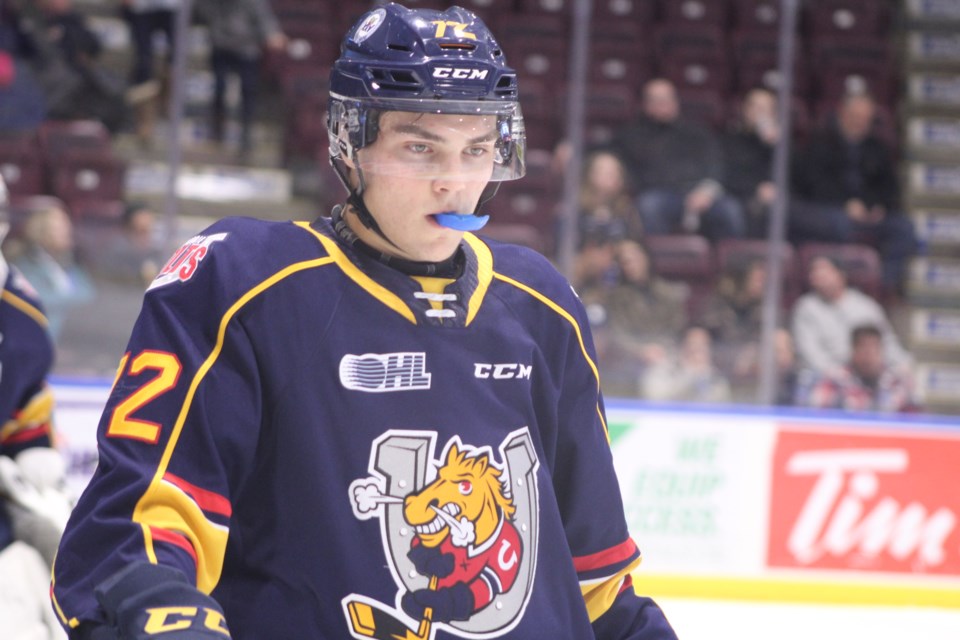 Nathan Allensen was literally beaming at the prospect of playing in Kitchener.

"It felt like Christmas morning," he told me late last week, before his Barrie Colts played the Rangers at The Aud.

You can't fault the Waterloo native.  It's not like he gets this opportunity every day, considering he plays for the Barrie Colts, a team that only visits once a year.

Home is where the heart is for the Waterloo Wolves alum, who had about 50 family and friends in the stands last Friday for the Colts' 6-4 win over the Rangers.

"The support, from my family and friends is outrageous.  I can't thank them enough for that," he said.

"There's nothing like family and friends coming to watch you.  Even away games, they always come to watch me and it means a lot," Allensen continued, "It's tough living away from home and not seeing your family every day, but when you get to see them, it means a lot and I can't thank them enough for all the sacrifices and support they've given me throughout the years."

The 18-year old third-year defender has improved his game since entering the league, establishing career highs in points each year and is seeing top pairing minutes.

He admits starting his OHL career as a 16-year old was hard, but gives credit to some of the leaders on their 2017-18 team for giving him direction.

If you remember, Allensen started his OHL career with a bang, scoring 2:41 into his first career game on a team that featured the likes of future Ranger Alexey Lipanov and current Carolina Hurricanes star Andrei Svechnikov.

"We had a good team that year, with some great leaders and our coaching staff have always been good to me, just coming to the rink, learning every day and just working my way up the lineup," he said.

"Now being one of those older guys with this young team, I'm just trying to lead and give back everything I've learned so far."

Allensen, who was Barrie's second round selection in 2017, sits at 33 points in 54 games this season, seemingly on a mission after getting passed up in the 2019 NHL Entry Draft.

"That was a big part of my off-season, thinking that I wasn't drafted, I used it as my motivation," he said, "It was in the back of my head, but I think that's why I've been so successful this year."

"I have to credit to the guys at Depth Training in Waterloo, and my skills coach for pushing me throughout the summer and just getting better every day."

Allensen says he's looked to make every workout purposeful, all the way down to each individual rep.

Among his training regiment came the introduction of boxing, something he took on with Colts teammate --- and Kitchener native ---- Luke Bignell.

"He's been doing it for a while, but I joined this year," Allensen says, "It's great for cardio, and you got to be ready if someone drops the gloves out here."

But while using the draft snub as motivation to improve, he's more focused on going on a lengthy playoff run with Barrie, who sit fifth in the Eastern Conference and play in Owen Sound Wednesday night.

"For me, it's just putting in the work," he said, "Playing through every situation this year, I think it's gotten me more ready for the next step."

"We got a great team so we're just looking forward to playoffs here.  Hopefully we can have a long stretch, and what ever happens with the drafts and camps can fall there, but hopefully we have a good end of the season and a good playoff run."

Willms is Kitchener’s iron man
Mar 25, 2020 1:45 PM
Comments
We welcome your feedback and encourage you to share your thoughts. We ask that you be respectful of others and their points of view, refrain from personal attacks and stay on topic. To learn about our commenting policies and how we moderate, please read our Community Guidelines.