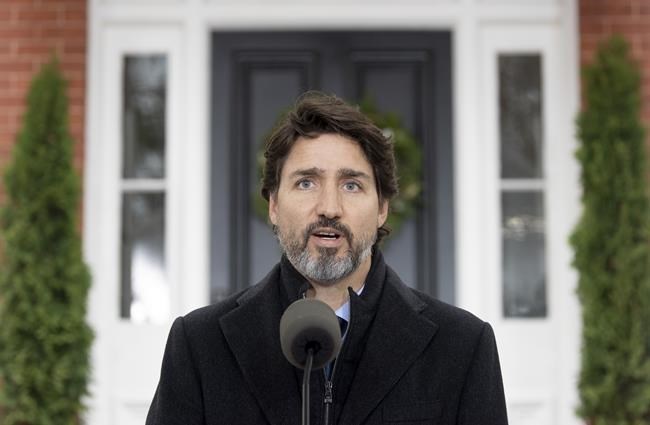 While Trudeau stood in front of his home Friday and implored Canadians to stay in theirs, opposition leaders didn't echo that message.

Trudeau had given them a briefing late Thursday on the new modelling data, which predicts new cases could hit upwards of 20,000 a day if Canadians don't take greater care to limit their contact with people outside their households.

The rare briefing — which those inside the room described as technical, with chief public health officer Dr. Theresa Tam doing the talking — was intended to encourage cross-partisan unity on the subject.

Within minutes of the briefing, Conservative Leader Erin O'Toole instead issued a scathing assessment of the soaring case numbers,  laying the blame squarely on the Liberal government and its failure to approve rapid test kits, among other things.

Then Friday, O'Toole pivoted to campaign-style events held virtually. His office said he had nothing to say in response to Trudeau's dramatic and lengthy plea to Canadians.

At a news conference Friday just as Trudeau was finished speaking, NDP Leader Jagmeet Singh said the new projections are terrifying, and pointed to multiple failures within the system.

He said everyone backs the science that drives the public health measures and, in turn, there is cross-partisan support for that advice.

"But my job is to make sure that it's followed, to make sure it's actually in touch with what people are going through," Singh said.

That means prodding the government to ensure there are adequate supports to ensure people can afford to follow public health advice. Othewise, Singh said, the advice is "meaningless."

In the past, Singh has made videos on the social media platform TikTok focused solely on encouraging people to do their part to slow the spread of the virus.

O'Toole has used his own experience getting the novel coronavirus as evidence people need to be cautious.

That they focused instead on the government even in the wake of the alarming new numbers is how democracy works, Trudeau suggested Friday.

"And that's how it should work, because the government needs to be on its toes every time, " he said.

The pandemic needs to be bigger than politics, and Canadians need to be able to believe their leaders are working together, he said.

Still, he took a swipe at Conservatives for going down what he called "rabbit holes" of conspiracy theories.

In recent days, Conservative MP, Pierre Poilievre, as well as conservative pundits, has seized upon remarks Trudeau delivered earlier this year where he called the pandemic an "opportunity for a reset" as part of a speech to the U.N.

Trudeau's detractors have sought to link that with what's known as the "Great Reset," a World Economic Forum program that suggests the pandemic opens up an avenue to revamp "all aspects of society" to avoid a pandemic-induced depression that could cripple the globe.

To some, the notion suggests a plot to upend the current global order without meaningful consent from voters, and posts suggesting one is afoot have been gaining widespread traction online for days.

"Canadians must fight back against global elites preying on the fears and desperation of people to impose their power grab," reads a petition from Poilievre that now has close to 80,000 signatures.

Trudeau said Friday that the pandemic does provide an opportunity to rethink how the most vulnerable in society are supported and to create better outcomes for all.

But he cautioned opponents — and all Canadians — against seeing things that aren't there.

"I think we're in a time of anxiety where people are looking for reasons for things that are happening to them ... It's nice to be able to try and find someone to blame, something to point to, something to get mad at," he said.

"I think we're seeing a lot of people fall prey to disinformation and if Conservative MPs and others want to start talking about conspiracy theories, well that's their choice."

The Green party is asking for an emergency debate in Parliament, hoping to find some way to create a more unified message.

Earlier this week Leader Annamie Paul asked for a national task force of scientists to guide messaging and responses so there is a more cohesive approach.

“There is a lack of collaboration and coordination at all levels of government," Paul said Friday.

This report by The Canadian Press was first published Nov. 21, 2020.

Teen recalls hearing laughter during sex assault at St. Mike's school, court hears
Dec 1, 2020 6:08 PM
Comments
We welcome your feedback and encourage you to share your thoughts. We ask that you be respectful of others and their points of view, refrain from personal attacks and stay on topic. To learn about our commenting policies and how we moderate, please read our Community Guidelines.