The Battle of Capitol Hill: White House race gets headlines, but Senate has suspense

WASHINGTON, Wash. — The race to win the White House may be getting all the headlines, but there's real suspense in the battle for control of Capitol Hill.
Oct 28, 2020 10:27 AM By: Canadian Press 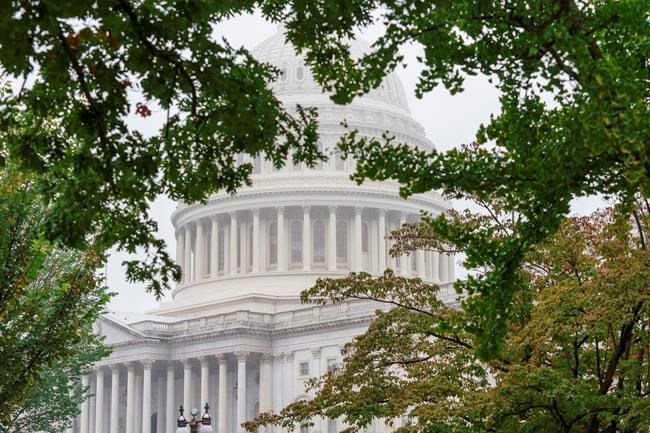 WASHINGTON, Wash. — The race to win the White House may be getting all the headlines, but there's real suspense in the battle for control of Capitol Hill.

Overshadowed by the main event of election season, the races to establish the partisan rosters of the Senate and the House of Representatives are no less important in shaping what lies ahead on America's political terrain.

And what Congress will look like next year remains far from clear.

"If there's anything that I'm most confident about going into this election, it's that the Democrats are going to retain majority control of the House," said Bob Oldendick, a politics professor at the University of South Carolina.

"The one that's more difficult is obviously the Senate."

Here's the state of play: Republicans currently hold a Senate majority with 53 of the 100 available seats, while the Democrats have effective control of 47, a total that includes independent senators Bernie Sanders and Angus King.

Anywhere between five and 12 of those seats are in play this time around, including several that would normally be solidly Republican, but remain unsettled by Donald Trump's seismic style of governing.

South Carolina, Arizona, Colorado, Montana and Maine all feature what Oldendick describes as "toss-up" races that Democrats would have to sweep in order to have a chance to win control of the Senate.

"I think that probably the most likely outcome is going to be either a 51-49 majority for Republicans or a 50-50 split," he said.

"If it's 50-50, then it just depends on who wins the presidency, with the vice-president then breaking any ties. I really do believe that it's that close."

Across the country, COVID-19, Trump fatigue and a famously polarized electorate have all but reduced the 2020 election to a referendum on a single issue: who is best equipped to lead people safely out of the pandemic.

"Down-ballot races are going to be affected by the presidential race … to a larger extent this year," University of Georgia professor Trey Hood said of the electoral landscape in his state, long a Republican stronghold.

Shifting racial demographics in Georgia, where voters haven't veered from the Republicans in 20 years, are one big reason the Democrats are contending up and down the ticket in 2020.

The other is Trump.

"There are people … voting for Joe Biden, but they're not turning out really because they want to," Hood said. "They're highly motivated to vote for Biden, but it's mostly voting against Trump."

The result is a dead heat in the state's presidential race, as well as in the two Senate contests.

A poll conducted last week by the university's School of Public and International Affairs suggested Trump and his Democratic rival are statistically tied in Georgia, as are U.S. Sen. David Perdue and Democrat challenger Jon Ossoff.

Sen. Kelly Loeffler and Rep. Doug Collins, the two Republicans battling to carry the party's banner into a likely special election run-off, are also deadlocked. The winner is expected to face Raphael Warnock, a well-known Atlanta pastor, in January.

The down-ballot drama abounds elsewhere across the country as well.

In Maine, the famously centrist Republican Sen. Susan Collins, smarting politically from voting in 2018 to put Brett Kavanaugh on the Supreme Court, is under siege from the hard-charging Democrat Sara Gideon, the state speaker.

In North Carolina, however, not even a salacious extramarital sexting scandal has yet derailed Cal Cunningham's bid to unseat Trump-allied Republican Sen. Thom Tillis.

In Alabama, Democrat Doug Jones is facing eviction from former football coach and staunch Trump ally Tommy Tuberville, despite controversy over the latter's lax handling of a former player charged with sexual assault in 1999.

And in Iowa, Sen. Joni Ernst — a Trump backer who has propagated a debunked conspiracy theory by publicly casting doubt on COVID-19 death tolls — is hoping to fend off Theresa Greenfield, a former farm girl from southern Minnesota.

By contrast, most observers expect less drama among the 435 seats in the House, where the Democrats hold a comfortable 35-seat majority.

Of course, the U.S. president isn't most observers.

Few seem to concur — least of all Pelosi herself, who called Trump "delusional" on the weekend as she told CNN she would seek the speaker's gavel again in the next Congress.

"You just keep on thinking that, Mr. President."

COVID-19 Atlantic bubble on hold as 2 provinces pull out; Toronto, Peel in lockdown
Nov 23, 2020 1:32 PM
Comments
We welcome your feedback and encourage you to share your thoughts. We ask that you be respectful of others and their points of view, refrain from personal attacks and stay on topic. To learn about our commenting policies and how we moderate, please read our Community Guidelines.