OTTAWA — An American Indigenous man has a constitutionally protected right to hunt in British Columbia given his people's historic ties to the region, the Supreme Court of Canada has ruled.
Apr 23, 2021 5:31 PM By: Canadian Press 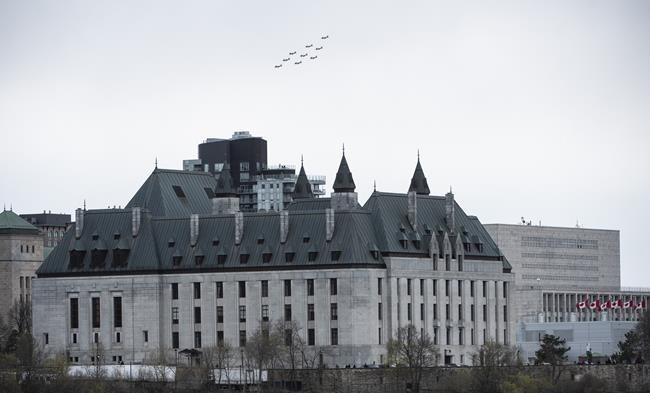 OTTAWA — An American Indigenous man has a constitutionally protected right to hunt in British Columbia given his people's historic ties to the region, the Supreme Court of Canada has ruled.

The top court's 7-2 decision Friday upheld the acquittal of Richard Lee Desautel, a U.S. citizen who was charged with hunting without a licence and hunting big game while not a resident of B.C. after shooting an elk near Castlegar in 2010.

Desautel defended his actions on the basis he had an Aboriginal right to hunt protected by section 35(1) of Canada's Constitution Act of 1982.

Desautel is a member of the Lakes Tribe of the Colville Confederated Tribes of Washington state, a successor of the Sinixt people, whose ancestral territory extended into what is now B.C.

The trial judge found the sections of B.C.'s Wildlife Act under which Desautel was charged had infringed his constitutional right to hunt in the province.

The decision was upheld by the B.C. Supreme Court and the province's Court of Appeal, prompting the Crown to take its case to the Supreme Court of Canada.

A central issue in the case was the interpretation of the Constitution Act's affirmation of the rights of "the aboriginal peoples of Canada," namely whether the phrase includes only Indigenous Peoples who are resident or citizens of Canada, or also those whose ancestors occupied territory that became Canada.

In writing for a majority of the high court, Justice Malcolm Rowe said the scope includes the modern-day successors of Aboriginal societies that occupied Canadian territory at the time of European contact.

"As a result, groups whose members are neither citizens nor residents of Canada can be Aboriginal peoples of Canada."

Rowe cautioned that, beyond this central issue, he would say little more about what that means for the exercise of rights protected under section 35(1).

"First, questions of law are better resolved in cases where there is a dispute that requires the answering of those questions," Rowe wrote. "And, second, the defence of a prosecution for a provincial regulatory offence, while it may serve as a test case (as here), is not well-suited to deal with such broader issues."

When Europeans first made contact in the early 1800s, the Sinixt were engaged in hunting, fishing and gathering in their ancestral territory, which extended into what later became Washington state to the south and B.C. to the north.

Due to a variety of reasons, the Sinixt moved to the United States, though not voluntarily.

Until 1930, members of the Lakes Tribe continued to hunt in B.C. despite living in the U.S. Periods followed when no hunting took place in the province, but the tribe maintained a connection to the land.

Meanwhile, by the early 1900s, only 21 Sinixt still lived on their traditional territory in Canada, in the Arrow Lakes Band reserve. The band was declared extinct after the death of the last member in 1956, and the reserve lands reverted back to the Crown.

The Crown had argued the Lakes Tribe might be able to establish common law Aboriginal rights in B.C., but this would not include the right to cross the international border into Canada.

In his arguments, Desautel stressed the Sinixt people's long-standing ties to the West Kootenay region of B.C.

"The Sinixt were here in Canada first, long before the assertion of sovereignty and the imposition of an international border which artificially divided their traditional territory in a manner foreign to their Indigenous perspective," said his written submission to the high court.

"The honour of the Crown requires that their prior occupation be reconciled with the assertion of sovereignty through the constitutional protection of their hunting rights in Canada."

Desautel travelled to Kettle Falls in Washington state, in the southern portion of the traditional territory, where he received word of the Supreme Court decision Friday through a video call from his lawyer Mark Underhill.

"I am at the end of my own journey through the court system, and at the beginning of the new journey of reconciliation for our people," Desautel said in a statement.

"I am grateful to the ancestors for their guidance and in helping our rights, traditions and natural laws prevail. I look forward to the hard work ahead together with the people of British Columbia."

The Supreme Court's recognition that rights are rooted in historical ties to a region has implications for other First Nations who have been forced from traditional lands, Underhill said Friday.

"It's a really important decision in that way, to affirm where rights come from and that they're not going to be lost by various forces of colonialism."

This report by The Canadian Press was first published April 23, 2021.