Sanders may be divisive, but supporters say progressive ideas have staying power 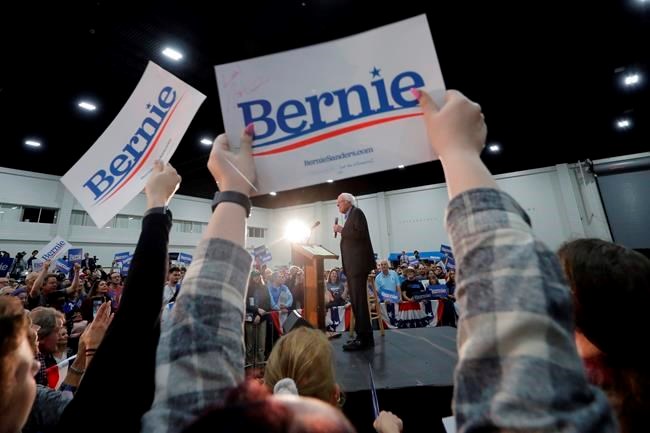 Archer, from Allentown, Pa., cashed in a week of her vacation time and spent hundreds of dollars of her own money — the plane ticket alone was $400 — to help organize events, make phone calls and staff rallies such as the one Wednesday in the South Carolina resort community of Myrtle Beach.

"I like his honesty and his integrity; I like that he is for the working people, as opposed to himself, like a lot of our other politicians," Archer said as she doled out greetings and "Bernie" placards to some of the more than 2,000 people who showed up in the middle of a rainy weekday at the Myrtle Beach Convention Center.

The Sanders-supporter stereotypes were on full display Wednesday, from the flower-power Volkswagen Bus in the parking lot and the "Tuck Frump" buttons for sale at the merchandise table to the flowing paisley dresses in the audience and the earnest, feel-good hip-hop playing before Sanders took the stage.

But Archer, a true believer in the 78-year-old Independent senator from Vermont since his unsuccessful nomination battle with Hillary Clinton began in 2015, insisted it's less about Sanders himself than it is about the ideas he espouses — a grassroots movement she believes will persist in the U.S. for as long as it takes.

"Just because Bernie may not be in the next election, doesn't mean we won't be. We believe in his ideas, and he wants his ideas to carry on."

As the undisputed front-runner in Democratic race and with the clock running down on his rivals, Sanders was standing at ground zero during Tuesday night's televised debates. But if he suffered any lasting bruises, he wasn't showing it in Myrtle Beach.

"The things we want to bring about aren't going to be done easily. The truth is that the only way, historically, that real change has ever taken place is never from the top on down, only from the bottom on up — it's the only way real change ever, ever takes place."

In many ways, the policies driving that grassroots movement strike a familiar note for Canadians.

Sanders likes to point out that he lives just minutes from the Canadian border when talking about his centrepiece policy, Medicare for All, and how his northern neighbours enjoy access to a publicly funded health-care system at half the cost of America's private-insurance patchwork.

He talks at length about income inequality, gender discrimination, climate change and wage parity — issues that have long been a frequent preoccupation for Canada's federal Liberal government.

And Wednesday's crowd erupted in paroxysms when he promised to use his executive-order powers as president to legalize marijuana on Day 1 in the White House.

But anyone who thinks a Sanders presidency would automatically put the U.S. in ideological lockstep with a more progressive country like Canada is kidding themselves, said Robert Oldendick, a political-science professor at the University of South Carolina in Columbia, S.C.

Even with Sanders in the White House, the composition of the Senate and the House of Representatives — currently controlled by the Republicans and the Democrats, respectively — is a critical factor in getting things done, Oldendick said.

"Do the Democrats also take back the Senate and maintain the House, or does one or both of those split? Because if they don't get a majority in both, then there's no way anything that he is proposing, any of the proposals that are central to him, will get passed," Oldendick said.

"It would be essentially four years of stalemate again with not much getting done. ... I just don't see a presidency of a candidate like Sanders being that much of a game-changer."

A new Pew Research Center study released Thursday illustrates the frustration in the U.S. with politics as usual.

While Canadian and American respondents to the survey were largely in sync, one metric jumped off the page: while 66 per cent of Canadians said they were content with how democracy is working in their country, only 39 per cent of Americans felt the same way.

Some would-be nominees, such as Pete Buttigieg, the former mayor of South Bend, Ind., have warned against the risk of a Sanders nomination fracturing the party, alienating centre-right voters who fear his message of "democratic socialism" and handicapping "down-ballot" Democratic candidates.

"If you want to keep the House in Democratic hands, you might want to check with the people who actually turned the House blue, 40 Democrats, who are not running on your platform," Buttigieg told Sanders during the debate, a reference to the Democratic "blue wave" of the 2018 midterms.

"They are running away from your platform as fast as they possibly can."

For Archer and others at Wednesday's rally, that sort of anti-Bernie panic is little more than primary-season hysteria — hysteria she's confident will fade away once Sanders takes the helm.

"This is kind of what you do, you kind of dust things up and then let things settle down. I think once they see what strong support he has, how big this grassroots movement is, I think everybody will get behind him," she said.

"Change is hard — especially when you've had the same thing for decades. It will be OK; I really believe that."