CALGARY — Researchers believe they have cracked the mystery of why fossilized eggs of only a few types of dinosaurs have been found.
Jun 17, 2020 1:32 PM By: Canadian Press 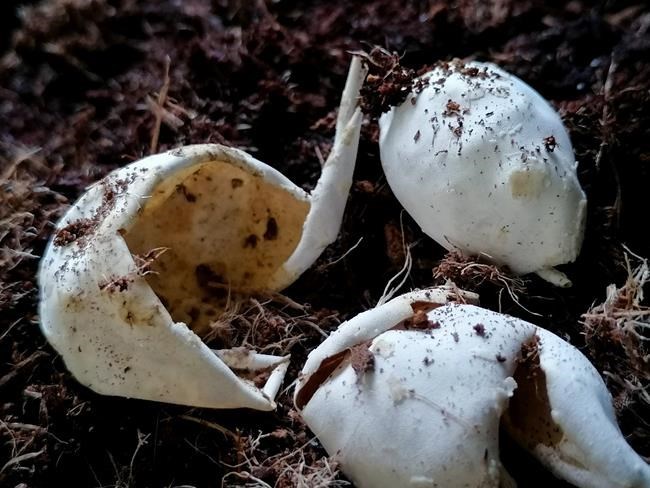 CALGARY — Researchers believe they have cracked the mystery of why fossilized eggs of only a few types of dinosaurs have been found.

A paper published Wednesday in the journal Nature suggests eggs missing from the fossil record may have been soft, like a turtle's, instead of hard, like those of a bird.

One of the authors of the study, University of Calgary paleontologist Darla Zelenitsky, said many fossilized eggshells have been found for certain bird-like, meat-eating dinosaurs as well as some long-necked and duck-billed plant-eaters.

Eggs of other dinosaurs — especially more primitive species — have been notably absent.

"Over the years, we had certainly entertained the idea that dinosaurs may have laid soft-shelled eggs. Others went so far as to entertain the idea of live birth," said Zelenitsky, who specializes in dinosaur eggs and nesting sites.

The international research team looked at egg clutches unearthed in Mongolia and Argentina with an unusual thin halo surrounding the fossilized embryos.

The Mongolian eggs, which were oval and up to 15 centimetres long, belonged to a horned dinosaur estimated to be between 71 million and 74 million years old. That species, Protoceratops, is an ancestor of dinosaurs discovered in Alberta that may have also laid soft eggs.

Zelenitsky said that could be why, after 30 years of egg discoveries in Alberta, no hard-shelled eggs belonging to large horned dinosaurs have been found there.

"They may be hidden in the fossil record as less discrete, thin- shelled, soft eggs."

The spherical, 12-centimetre-wide eggs found in Argentina belonged to a small, long-necked dinosaur called Mussaurus and date back 200 million years.

Study co-author Jasmina Wiemann, a PhD candidate at Yale University, used cutting-edge technology to examine the molecular composition of the fossils without damaging them.

She was able to determine the halos seen in the fossils weren't thinner-than-usual hard shells, but material that was likely "squishy and leathery in nature."

"For a long time we thought that generally soft tissue cannot fossilize," she said.

"We've made a lot of progress toward understanding that soft tissues preserve actually quite commonly, but they don't always look the way we would expect them to look."

Wiemann said scientists also have a better understanding of where the best-preserved, soft-shelled egg fossils can be found, like in river sediment, and how to prepare the fragile specimens so they aren't damaged.

"You have to have your mind set towards expecting something like this. Otherwise, you wouldn't pick it up in the field," she said.

"I would not be surprised if we found many more soft-tissued dinosaur eggs in the future, potentially in our collections already sitting there waiting."

Matteo Fabbri, another Yale researcher who contributed to the paper, said it seems dinosaurs started out having soft-shelled eggs and that hard shells evolved independently later in some types of dinos.

Hard-shelled eggs have been found dating back to the mid-Jurassic period 164 million to 170 million years ago, but the majority of specimens are from the Cretaceous period, which ended 66 million years ago.

Anything earlier, Fabbri said, has been a "black hole."

"Now we know that the early dinosaurs were much more reptilian in terms of their reproductive biology," he said.

"This is a complete change of perspective."

This report by The Canadian Press was first published June 17, 2020