OTTAWA — The idea that the man accused of crashing into the grounds of Rideau Hall would have been treated differently if he were dark-skinned is disheartening, the RCMP's commissioner and the head of its union said in a joint statement Friday.
Jul 10, 2020 11:22 PM By: Canadian Press 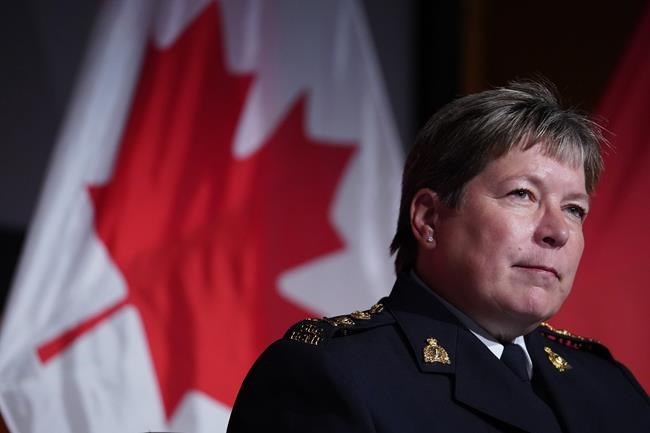 OTTAWA — The idea that the man accused of crashing into the grounds of Rideau Hall would have been treated differently if he were dark-skinned is disheartening, the RCMP's commissioner and the head of its union said in a joint statement Friday.

Not only that, said Commissioner Brenda Lucki and Brian Sauve of the National Police Federation, but it damages an "important national dialogue with all stakeholders seeking solutions to societal issues."

The Mounties have said the suspect was armed and threatening Prime Minister Justin Trudeau but was arrested peacefully after Mounties talked him down for more than an hour and a half on the morning of July 2.

They say the reservist on active duty with the Canadian Forces rammed a gate with a truck to enter the grounds.

Corey Hurren, who is from Manitoba, faces 22 charges, nearly all of them weapons offences related to the guns allegedly in his possession.

NDP Leader Jagmeet Singh is the most prominent person who has suggested the incident would have had a worse ending if Hurren weren't white.

The incident at Rideau Hall followed weeks of stories about police officers treating people of colour, especially Indigenous people, harshly, to the point of killing them.

That included Rodney Levi, an Indigenous man shot by RCMP in New Brunswick during a visit to check on his welfare in June.

On Wednesday, Singh said the contrast "reminds us all of how systemic racism is real."

Asked whether he believed the Rideau Hall incident would gone worse if the suspect hadn't been white, Singh simply replied: "Yes."

Lucki and Sauve said in their statement that the RCMP resolve the vast majority of crises without violence because of their commitment to using as little force as possible.

"To suggest a more violent conclusion would have been inevitable if the suspect was of another race is speculative and disheartening to the arresting officers, their families, and all partners who helped successfully and professionally resolve this threat," they said.

NDP MP Matthew Green said the joint statement is another example of Lucki being unable to recognize systemic racism.

Green, who is Black, questioned what the federal Liberals are doing to combat what he called systemic racism in the RCMP.

"This is less about the feelings of police, it's about the tragedies families face when their loved ones die at the hands of the police," Green said in an email.

"The incident at Rideau Hall is proof that under the greatest duress and threat, de-escalation works. But de-escalation is not always the experience of Black, Indigenous and racialized people. This should be the norm. Always."

Who can dismiss the Governor General? A look at protocols and possibilities
Aug 9, 2020 1:00 PM
Comments
We welcome your feedback and encourage you to share your thoughts. We ask that you be respectful of others and their points of view, refrain from personal attacks and stay on topic. To learn about our commenting policies and how we moderate, please read our Community Guidelines.