Premiers say federal COVID-19 vaccine procurement delays have left them no choice but to stretch out the time between doses, as pharmacies in some parts of Ontario were preparing to start giving shots next week.
Mar 4, 2021 7:52 PM By: Canadian Press 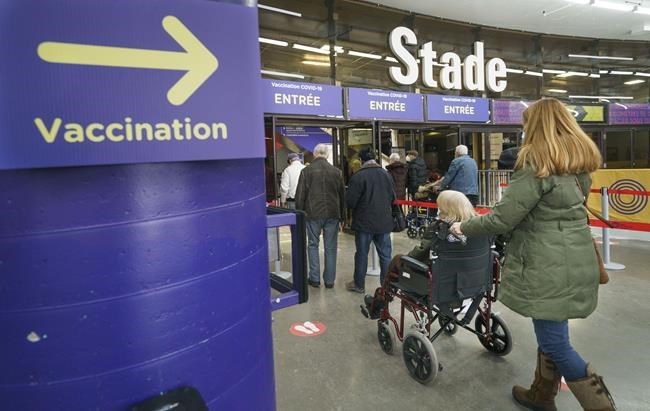 Premiers say federal COVID-19 vaccine procurement delays have left them no choice but to stretch out the time between doses, as pharmacies in some parts of Ontario were preparing to start giving shots next week.

Alberta Premier Jason Kenney said Thursday that he had asked chief medical officer Dr. Deena Hinshaw some time ago to take a serious look into allowing a four-month gap between shots after seeing "tremendous" results in the United Kingdom and Israel.

He said an outbreak driven by a new, more transmissible COVID-19 variant started at a seniors' home in Edmonton on Monday just as residents were supposed to be receiving their vaccines.

"They should have been vaccinated weeks ago, like they were in similar settings in the United States, Israel, the U.K. and many, many other countries," he said following a virtual premiers' meeting.

"This is extremely frustrating and I think we have no choice but to expand the interval to get more people covered."

Alberta announced Thursday that it is extending the timeline for second doses to four months. It said nearly half a million more people in the province will become eligible for shots in the next two weeks as more supplies become available.

That includes 437,000 doses for anyone between 65 and 74 and Indigenous people over 50 starting the week of March 15. Another 58,500 doses of the Oxford-AstraZeneca vaccine will be made available to Albertans without chronic health conditions between 50 and 64 starting March 10.

Alberta reported 331 new cases of COVID-19 and nine more deaths due to the illness on Thursday.

British Columbia, which reported another 564 cases and four deaths in its latest update, will be distributing the Oxford-AstraZeneca vaccine to first responders and essential workers, said health officer Dr. Bonnie Henry.

Henry announced Monday that B.C. would be allowing up to four months between doses. Several other provinces followed suit after a national panel of vaccine experts recommended Wednesday that such an extension would be appropriate if supplies are limited.

Labels of the Pfizer-BioNTech and Moderna vaccines call for a three or four-week gap between doses.

Research has shown one dose is 70 to 80 per cent effective for up to two months, but it's unclear how long protection lasts beyond that.

Saskatchewan Premier Scott Moe said Thursday his province is moving to the four-month interval because the federal government has done a "disappointing job at best" in quickly getting vaccines to provinces.

Manitoba Premier Brian Pallister added: "Let's face it: this strategy has become necessary as a consequence of an absence of vaccines."

A Health Canada official said that a decision on Johnson & Johnson's COVID-19 vaccine could come "within days," making it the fourth to be approved.

Maj.-Gen. Dany Fortin, who is leading Ottawa's vaccine rollout, told a media briefing that nearly three million doses have been distributed to the provinces and territories so far.

"In April, we're anticipating a steep increase in vaccine availability," he said. That includes 23 million doses of the Pfizer-BioNTech and Moderna vaccines between April and June and at least 1.5 million of the Oxford-AstraZeneca vaccine by mid-May.

Ontario Health Minister Christine Elliott said many of the Oxford-AstraZeneca doses the province receives will go to pharmacies for a pilot program beginning next week. The Ontario Pharmacists Association said about 380 pharmacies in Toronto, Kingston and Windsor-Essex will be doling out shots initially.

A similar program in Alberta began with pharmacies in Edmonton, Red Deer and Calgary this week.

Ontario recorded 994 new infections and linked 10 more deaths to the virus on Thursday.

Quebec said it had 707 new cases, along with 20 additional deaths. It is easing restrictions in Quebec City and four other regions starting Monday, but keeping them in place in the Montreal area due to concern over variants.

New modelling suggests the variant first identified in the U.K. is likely to become the dominant strain the province by mid-April.

This report by The Canadian Press was first published March 4, 2021