OTTAWA — Many transit riders in Ottawa were left out in the cold during a heavy snowstorm after serious power issues on the city's light-rail system slowed service to a snail's pace Thursday.
Feb 27, 2020 1:43 PM By: Canadian Press 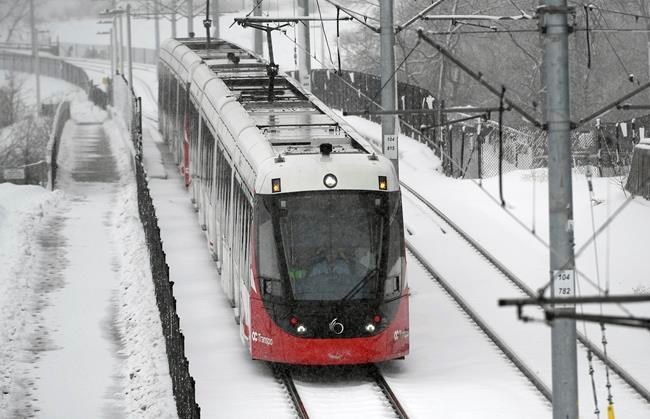 OTTAWA — Many transit riders in Ottawa were left out in the cold during a heavy snowstorm after serious power issues on the city's light-rail system slowed service to a snail's pace Thursday.

The system needs 13 trains to run at full service but at some points during the morning rush hour only six were working — leaving thousands of passengers with a long and crowded commute.

The breakdowns, which started Wednesday evening, meant some transit riders had to leave the trains and walk on the tracks to the nearest stations.

"We don't want evacuations, we don't want to have people walk on the track, in the tunnel," said the city's transit manager, John Manconi. "We're not happy that we're doing that."

Ottawa's LRT system has been plagued since full service began last October, hindered by issue after issue with the trains themselves and overhead wires.

Rideau Transit Group (RTG) CEO Peter Lauch denied the winter storm had anything to do with the latest problems.

He pointed to a damaged power line and ongoing issues with the train's power inductors, which often fail when exposed to the elements.

RTG has been installing covers for the inductors and the ones that are protected are working well, Lauch said. But so far, only 19 of the line's 34 light-rail cars have been retrofitted (two cars make up one train).

Ottawa is the first city to use this particular version of Alstom's low-floor Citadis Spirit train model. Problems with the trains, including door jams and other mechanical failures, were one of the reasons the project launched more than a year behind schedule last fall.

The ongoing problems have attracted attention from outside the capital from cities eyeing similar LRT systems, or, in the case of Metrolinx in the Toronto area, purchasing the same cars.

Some city councillors have called for the trains to be replaced with a more reliable model, but Lauch said despite the ongoing breakdowns, the trains are "good" and can provide service. Every time RTG develops a new solution to work around the issues, the train design is modified for new customers.

But he admitted that's "cold comfort" for the train-riding public in Ottawa.

Ottawa's LRT was designed to reduce emissions by replacing hundreds of buses from the downtown transit corridor. But for about a month, the city has had to run bus service parallel to the line to make up for the unreliable service.

Ontario NDP transit critic Jessica Bell raised the ongoing issues with Ottawa's LRT system in the legislature Thursday and asked the premier to put a moratorium on public-private partnerships until projects that have experienced problems are reviewed.

She also noted Toronto's Eglinton Crosstown light-rail project, which is now expected to be completed about a year behind schedule.

Premier Doug Ford responded that public-private partnerships in Ontario have a good track record of being on time and on budget, and questioned why Bell doesn't want transit built in the province.