MONTREAL — Demonstrators gathered in downtown Montreal on Saturday to protest planetary warming on the Global Day of Action for Climate Justice.
Sep 26, 2020 9:51 PM By: Canadian Press 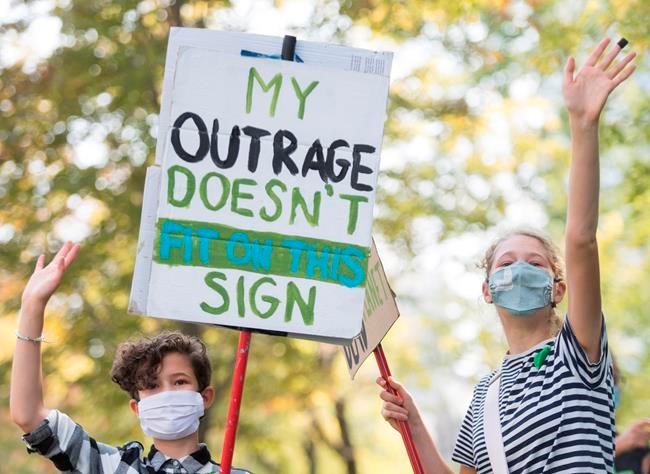 MONTREAL — Demonstrators gathered in downtown Montreal on Saturday to protest planetary warming on the Global Day of Action for Climate Justice.

The coalition behind the event is calling for net zero emissions by 2030 as part of a broad slate of demands that also includes Indigenous self-determination, migrant rights and defunding the police.

Lylou Sehili, co-spokeswoman for the Student Coalition for an Environmental and Social Shift, said combining divergent social issues into a single movement strengthens their message.

"We cannot exclude social justice from the climate fight," Sehili said, pointing to a legacy of colonialism she said manifests itself in areas ranging from resource extraction to police brutality.

Activists gathered at Place du Canada around 1 p.m. to kick off the march, which went east on Sherbrooke Street from the intersection of Peel Street and Rene-Levesque Boulevard.

A group of parents set up an installation showcasing scores of children's shoes to symbolize the carbon footprint current generations are leaving for their kids.

"Young people will be disproportionately impacted by climate change. The Quebec government must act now to ensure their safety," said Dr. Genevieve Ferdais, a family doctor and member of the group For Our Kids Montreal.

The demonstration follows the Liberal government's throne speech Wednesday, which singled out clean technology and green jobs as cornerstones of an economic rebound.

The address, which outlined the government's priorities for the new session of Parliament, did not change its emissions goals of net zero by 2050 and a one-third reduction by 2030.

Saturday's event also comes a year after hundreds of thousands put foot to pavement for the Montreal Climate March, which featured teen climate activist Greta Thunberg as the keynote speaker.

This report by The Canadian Press was first published Sept. 26, 2020.