OTTAWA — A representative of Canadian families and loved ones killed in Iran's shootdown of a Ukrainian airliner in January says a new report blaming a misaligned missile battery and other mistakes by the Iranian military for the tragedy underscores
Jul 12, 2020 5:06 PM By: Canadian Press 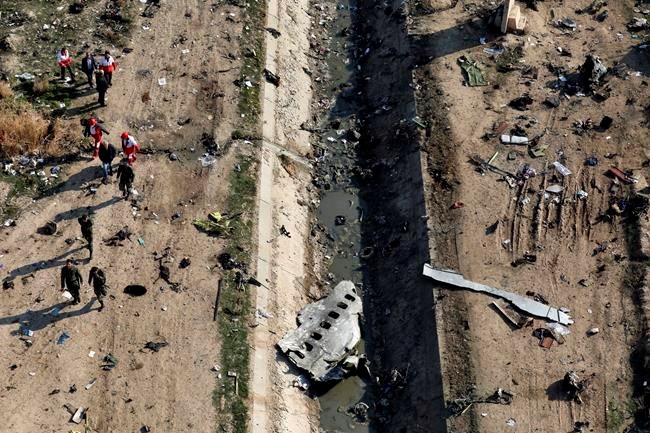 OTTAWA — A representative of Canadian families and loved ones killed in Iran's shootdown of a Ukrainian airliner in January says a new report blaming a misaligned missile battery and other mistakes by the Iranian military for the tragedy underscores the need for an independent investigation.

The Jan. 8 crash killed 176 people, including 55 Canadian citizens, 30 permanent residents and dozens of others with connections to Canada.

Iranian authorities initially denied responsibility, only changing course days later after Western nations presented extensive evidence that Iran had shot down the plane. Iran has since been accused of stonewalling efforts to investigate the full circumstances around the crash.

Hamed Esmaeilion, a Toronto dentist whose wife Parisa and nine-year-old daughter Reera died on the plane, reiterated those allegations on Sunday following release of the civil aviation report.

"It raises more questions and more questions," Esmaeilion told The Canadian Press in an interview. "It's very hard to believe this story."

At the time, Iranian troops were bracing for a U.S. counterstrike. The civil aviation report does not acknowledge that, only saying a change in the "alertness level of Iran’s air allowed previously scheduled air traffic to resume.

The report detailed a series of moments where the shootdown of PS752 by two Revolutionary Guard missiles could have been avoided, starting with the surface-to-air missile battery that targeted the Boeing 737-800 having been relocated and not properly reoriented.

Those manning the missile battery also could not communicate with their command , the report said. They also misidentified the civilian flight as a threat and opened fire twice without getting approval from ranking officials.

"If each had not arisen, the aircraft would not have been targeted," the report said.

Western intelligence officials and analysts believe Iran shot down the aircraft with a Russian-made Tor system, known to NATO as the SA-15. The system is mounted on a tracked vehicle and carries a radar and a pack of eight missiles.

The report did not say why the Guard moved the air system, but noted the Ukrainian flight had done nothing out of the ordinary up until the missile launch, with its transponder and other data being broadcast.

"At the time of firing the first missile, the aircraft was flying at a normal altitude and trajectory," the report said.

Esmaeilion, one of the founders of a group demanding justice for the victims of PS752, said one question that stood out to him after reading the report was why that particular flight was targeted and not several others that had taken off a short time earlier.

He suggested the report was yet another attempt by Iran to paint the tragedy as a mistake without allowing a full investigation.

"It's very hard to believe this story and this is the only scenario that makes it an accident," he said. "It was wrongly calibrated 107 degrees, but why were the other eight planes safe? Why? It was calibrated wrong just for PS752?"

The report put the blame entirely on the crew of the missile battery. Six people believed to be involved in the incident have been arrested, a government spokesman reportedly said in June. He said at the time three had been released on bail while the other three remained held.

The report's release comes ahead of the long-awaited handover of PS752's voice and data recorders. Iran has promised but failed to hand over the so-called black boxes for months, but now says it will send them to France on July 20.

Global Affairs Canada spokesman Sylvain Leclerc did not directly respond to questions about the civil aviation's report, and instead pointed to Foreign Affairs Minister Francois-Philippe Champagne's past calls for Iran to conduct a full and transparent investigation.

Canada will continue to actively work with its international partners to hold the Iranian regime to account and to ensure Iran follows through on its commitments," Leclerc said in a statement.

"Canada and its partners will continue working to ensure transparency, accountability, justice, compensation and closure for the families of the victims of this terrible tragedy."

This report by The Canadian Press was first published July 12, 2020.

— With files from The Associated Press