International travellers arriving in Alberta by air or land will have the option to take an expedited COVID-19 test to avoid quarantining for 14 days — a move the premier says would help the province's struggling service and tourism industry.
Oct 22, 2020 6:23 PM By: Canadian Press 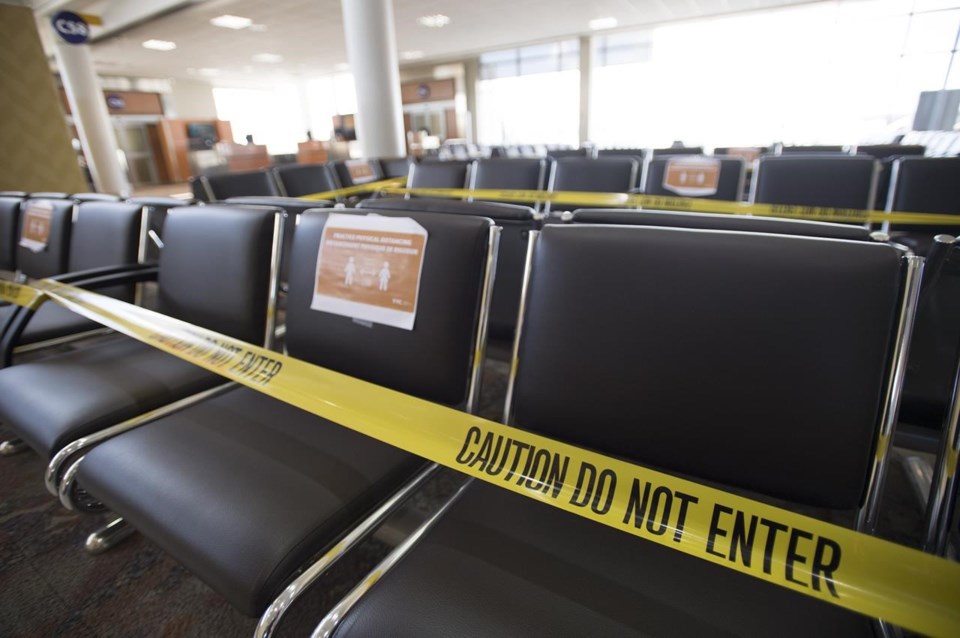 International travellers arriving in Alberta by air or land will have the option to take an expedited COVID-19 test to avoid quarantining for 14 days — a move the premier says would help the province's struggling service and tourism industry.

The pilot project, which Premier Jason Kenney said will be the first of its kind in Canada, is to start Nov. 2 and will be voluntary. The new testing option will be offered at the Coutts land border crossing into the U.S. in southern Alberta and the Calgary International Airport.

"Only about three per cent of active cases in Alberta have been acquired through travel," Kenney said during a news conference Thursday.

"Recognizing this, and the fact that COVID is not going away any time soon, we have been looking at new ways to support the travel industry and bring back safe travel."

A mandatory, 14-day quarantine period for returning international travellers will remain. But the new tests will allow for that to be shortened to about two days if travellers test negative for COVID-19 and commit to another test in six or seven days after arrival. They will not be allowed to travel outside Alberta for 14 days.

Participants are to be closely monitored through daily symptom checks and will be required to follow health measures, such as wearing masks in public and avoiding visits to high-risk groups.

Kenney said Alberta's tourism industry is expecting a 63 per cent drop in visitor spending this year, which will have a large effect on jobs.

"Behind every one of those jobs, there is a family who is facing uncertainty, and a person who needs to pay their mortgage, or a parent who needs to put groceries on the table," he said.

"That's why we cannot turn our back on the travel, the tourism industry and the Albertans' lives that have been thrown into upheaval."

The premier made the announcement about the joint provincial-federal project over the phone from his home in Edmonton, where he is in self-isolation after one of his ministers tested positive for COVID-19. The government announced Wednesday that Municipal Affairs Minister Tracy Allard was experiencing mild symptoms.

Kenney had already said that he tested negative, but was quarantining for the next week as a precaution.

Also Thursday, Alberta saw its highest single-day tally for COVID-19 cases since the pandemic began in March. Some 427 new infections were reported, but no new deaths.

It was the second day in a row that the province surged over 400 cases. So far, 296 people in the province have died from the virus.

Earlier in the day,  Calgary Airport Authority president Bob Sartor said the traveller testing pilot project was what "we have all been waiting for months."

""This innovative, government-approved, science-based testing trial for international arriving guests is the lifeline that airports and airline partners need to instil confidence in air travel once again."

Ontario Premier Doug Ford said he will be keeping "a really sharp eye" on the project.

"I'd be open to it, but I just first want to see what's happening in Calgary with it, because Toronto is much different than Calgary," he said.

A professor of medicine at McMaster University in Hamilton cautioned that two days of quarantine aren't enough.

Zain Chagla said in an interview that the novel coronavirus can live inside an infected person for several days before it shows up on a test, and the person can infect others during that time.

Anyone contracting the virus during the final days of travel could pass the initial test and be out in the community before the infection was caught by the second test, he said.

"The odds are you're going to pick up about 80 per cent of the people while travelling with that first test, but there is going to be a percentage that you're going to miss that are going to go into the community and become spreaders," Chagla said.

"There's a window of about five days where there may be a public health implication."

The testing option should only be used by those who need to travel, he said.

Kenney said if the project goes well, it will be expanded to the airport in Edmonton.

He also said that, starting Monday, Albertans who have to leave the country for essential travel will have the option to receive their COVID-19 tests within 72 hours. They will be administered by Dynalife, a private company, for a $150 fee.

— With files from Bob Weber in Edmonton

COVID-19 cases in Canada remain on troubling course, Tam says, amid rising numbers
Nov 28, 2020 8:18 PM
The latest news on COVID-19 developments in Canada
Nov 28, 2020 6:46 PM
Paramedics, police treat seven people who overdose at party in Vancouver's West End
Nov 28, 2020 6:31 PM
Comments
We welcome your feedback and encourage you to share your thoughts. We ask that you be respectful of others and their points of view, refrain from personal attacks and stay on topic. To learn about our commenting policies and how we moderate, please read our Community Guidelines.