HALIFAX — A conservation group is calling on the Canadian and U.S. governments to take action to protect North Atlantic right whales after new data revealed a sharp decline in the animal's population. The U.S.
Oct 28, 2020 4:22 PM By: Canadian Press 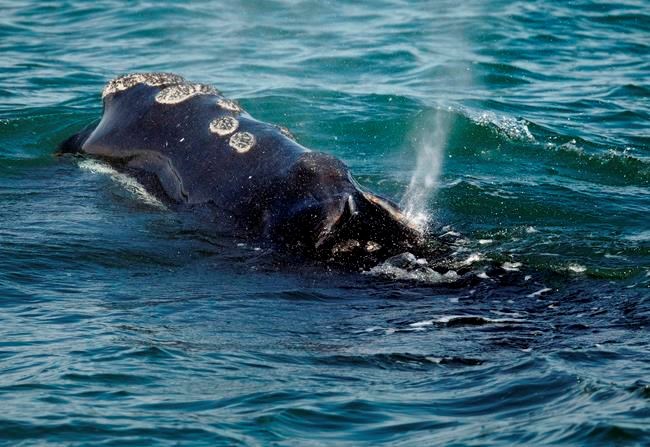 HALIFAX — A conservation group is calling on the Canadian and U.S. governments to take action to protect North Atlantic right whales after new data revealed a sharp decline in the animal's population.

The U.S. National Oceanic and Atmospheric Administration reported that as of January 2019, an estimated 366 North Atlantic right whales remained in the ocean, down from the previous count of 412 in 2018.

"It's going towards the edge of extinction and something needs to happen," she said in an interview Wednesday.

Her organization is asking governments on both sides of the border to impose speed limits in order to prevent collisions with the whales. The area of concern in Canada, Elmslie said, is the Cabot Strait, between Cape Breton and Newfoundland and Labrador.

Transport Canada suggests boats reduce speeds to 10 knots or less in the straight -- but compliance is voluntary. That speed, Elmslie said, is the "magic mark" for right whales, as they have a "fairly" good chance of surviving a possible collision with a boat.

But compliance with the voluntarily restriction is less than 50 per cent, she said. Areas with mandatory restrictions see nearly perfect levels of compliance, she explained.

Moira Brown, a senior scientist at the Canadian Whale Institution, said, "It's pretty clear that more right whales have died than have been born for quite a few years now and the population is in decline."

Part of the problem, Brown explained in an interview Wednesday, is that the right whales have shifted their habitat dramatically in the last decade and are now appearing in large numbers in the Gulf of St. Lawrence. Governments and the fishing industry have been forced to adapt to work around the quickly moving population, she said.

Oceana Canada said entanglement in fishing gear is another leading cause of injury and death for right whales. In response, the group is also campaigning for a reduction in the number of fishing lines in the water.

Sean Brillant, a senior conservation biologist with the Canadian Wildlife Federation, is researching "ropeles" fishing technology, which he says allows lines to be stored with traps at the bottom of the ocean.

The traps are released when a fisher is ready to harvest their catch, which he said could help balance the interests of the fishing industry and conservationists.

"We're interested in finding a way to continue to benefit from using the oceans, such as fishing, but without accidentally driving species to extinction," he said in an interview Wednesday.

Barre Campbell, spokesman with the Department of Fisheries and Oceans, said his office will work closely with his U.S. counterparts and with academics to improve protection measures for the whales.