OTTAWA — The Senate has voted to suspend Sen. Lynn Beyak a second time over derogatory letters about Indigenous Peoples posted on her website.
Feb 27, 2020 3:57 PM By: Canadian Press 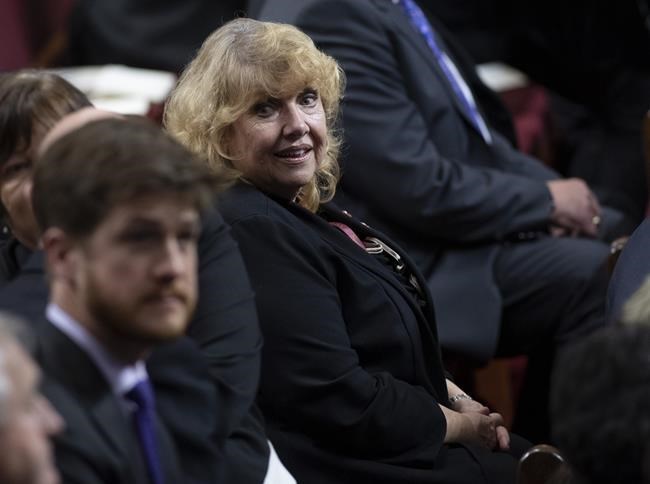 OTTAWA — The Senate has voted to suspend Sen. Lynn Beyak a second time over derogatory letters about Indigenous Peoples posted on her website.

Senators have approved a report from the upper house's ethics committee, which recommended Beyak be suspended without pay for the duration of the current parliamentary session.

The report was adopted "on division" — meaning with some opposition, though there was no recorded vote.

Beyak, an Ontario senator appointed in 2013, was kicked out of the Conservative caucus and eventually suspended without pay last May after refusing to remove the offensive letters from her website. The suspension ended automatically when Parliament dissolved for last fall's federal election.

She apologized on Tuesday, after which some of her former Conservative colleagues tried unsuccessfully to refer the matter back to the ethics committee.

However, Independent senators took the position that Beyak needed to be suspended again while undergoing anti-racism training and that the matter could be revisited after that.

The Senate's ethics committee recommended last month that Beyak be suspended again because she had not met the conditions laid down by the Senate for returning to the upper house in good standing, including offering a full apology, removing the letters, and taking an anti-racism training course.

The Senate administration removed the letters from Beyak's website after she refused to do so herself. The ethics committee deemed her apology to be perfunctory and her cultural sensitivity training a fiasco. The training was provided by the Ontario Federation of Indigenous Friendship Centres, which cut it short after concluding Beyak had no interest in confronting her ill-informed opinions about Indigenous Peoples.

The offending letters on Beyak's website were sent by supporters of a speech the senator gave in 2018, in which she argued that residential schools did a lot of good for Indigenous children, although many suffered physical and sexual abuse and thousands died of disease and malnutrition.

For months, Beyak refused to remove the letters or apologize for them, casting herself as a defender of free speech and a victim of political correctness.

However, on Tuesday she told fellow senators she now realizes the letters were "disrespectful, divisive and unacceptable" and that her refusal to remove them was wrong.

Quebec urged to create national director of youth protection to oversee system
Nov 30, 2020 2:18 PM
Comments
We welcome your feedback and encourage you to share your thoughts. We ask that you be respectful of others and their points of view, refrain from personal attacks and stay on topic. To learn about our commenting policies and how we moderate, please read our Community Guidelines.