MONTREAL — Audience members were called to lay white roses in front of the altar of a Montreal cathedral on Wednesday during a ceremony in honour of the hundreds of Quebecers who die each year with their bodies left unclaimed.
Sep 16, 2020 6:06 PM By: Canadian Press 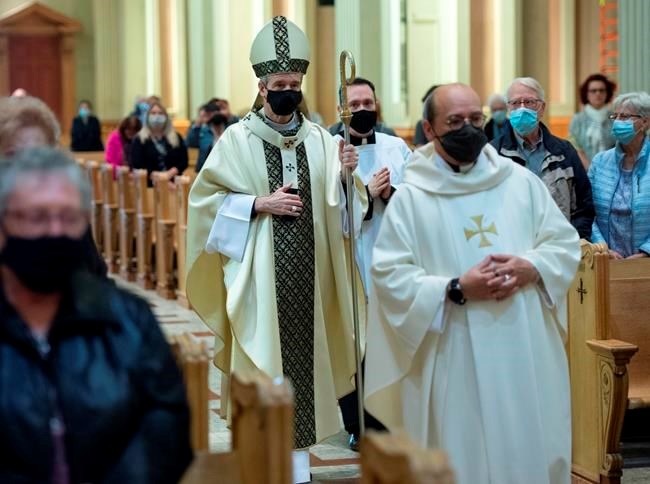 MONTREAL — Audience members were called to lay white roses in front of the altar of a Montreal cathedral on Wednesday during a ceremony in honour of the hundreds of Quebecers who die each year with their bodies left unclaimed.

The annual event took on special meaning this year because of the COVID-19 pandemic. Religious and community leaders said the COVID-19 health crisis has heightened issues of social isolation and poverty, which disproportionately affect society's most vulnerable.

At the beginning of the Catholic mass, Archbishop Christian Lepine told the crowd at Mary Queen of the World Cathedral that some 200 people die each year in the Montreal area without a family member coming forward to claim their remains.

Dressed in white robes, he urged the crowd to pray for those who die alone, often victims of homelessness or addiction.

In an interview ahead of the ceremony, Lepine said his goal this year was to highlight the need for human connection during a global pandemic that has left many people feeling isolated.

Lepine said it doesn't appear there are more unclaimed bodied this year during the pandemic compared with years past.

But Father Claude Paradis, who co-hosted the service, said the pandemic has played a role in the increased number of deaths that have occurred on the streets.

Paradis, known as Montreal's "street priest" for his years spent ministering to the city's homeless population, said he believes there were about 50 overdose deaths this summer, although there are no official statistics to confirm that number.

The pandemic played a part in those deaths, he said, because it led to increased isolation and despair among drug users. COVID-19 also disrupted the drug supply chain, which he said led users to consume more dangerous substances such as fentanyl.

Paradis, who was once homeless himself, said the economic hardships of the pandemic have also pushed more people on to the street at a time when many shelters were reducing capacity and meal services.

"Shelters were working at a slower speed, for example one shelter, instead of 200 people, they could welcome 79 in their place," he said in an interview. "So it (put) a lot of people on the street."

A spokesman for Quebec's coroner's office, however, said that while the number of unclaimed bodies is rising every year, there hasn't been a particular spike in 2020 that can be linked to the pandemic.

"It rises from one year to another, but we can't put COVID-19 in the equation," Sylvain Gallant said in an interview.

A list on the website of the Quebec coroner's office contains more than 150 names of people whose remains have not yet been claimed, including 30 from between January and Sept. 1 of this year. Those numbers, however, don't include people who died from COVID-19 because those deaths are tracked by the Health Department.

Sam Watts, the CEO of the Welcome Hall Mission, says there is little real data to measure how many members of the homeless population have died during the pandemic.

"Have there been people who have died? Yes, probably," he said, "and that's so unfortunate because that's one too many."

"Have there been an increase in overdoses? I think so, but we don't have good hard data on that."

Watts said data on homeless people, including the number of deaths, is difficult to calculate because most people drift in and out of homelessness.

But what is clear, he said, is that the pandemic made life harder for vulnerable people, who have had services disrupted, medical conditions untreated, and who have fallen deeper into poverty.

"We've seen greater levels of isolation among people," Watts said. "We have to give out referrals at the mission every day for people who just want to talk to somebody."

During the ceremony, Paradis invited members of the audience to step forward and carry a white rose to basket at the front of the church, as he read the names of some 25 people who have recently died.

Among those who stepped forward was Nathalie Renaud, whose daughter Catherine died of a drug overdose two years ago.

The ceremony, to her, highlighted the fact "there are too many people dying too soon, who could have been saved."

Renaud, who said her daughter had spent time on the streets, urged governments to act to combat homelessness in order to help others avoid the fate that befell Catherine.

This report by The Canadian Press was first published Sept. 16, 2020.

Haddad back on ballot for Greens after pointing out party hypocrisy
Sep 24, 2020 6:33 PM

Spectre of COVID-19 second wave looms as Quebec urges limited social gatherings
Sep 24, 2020 5:59 PM
Comments
We welcome your feedback and encourage you to share your thoughts. We ask that you be respectful of others and their points of view, refrain from personal attacks and stay on topic. To learn about our commenting policies and how we moderate, please read our Community Guidelines.