Amber Alert continues for missing Quebec girls, 6 and 11, and their father

LEVIS, Que. — Police are continuing their search around a Quebec City suburb after they issued an Amber Alert Thursday for two young girls and their 44-year-old father who investigators believe disappeared following a highway crash.
Jul 10, 2020 4:01 PM By: Canadian Press 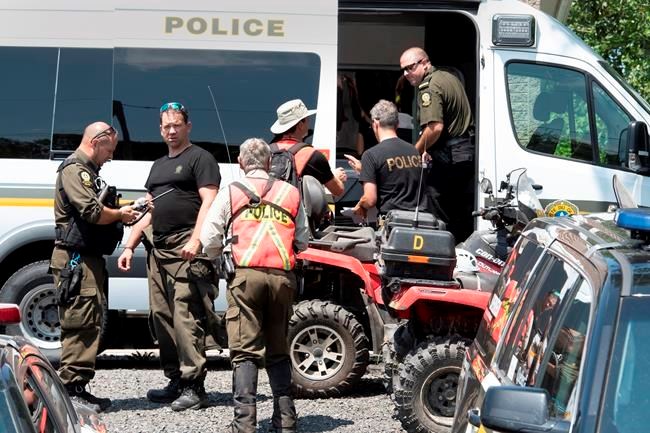 LEVIS, Que. — Police are continuing their search around a Quebec City suburb after they issued an Amber Alert Thursday for two young girls and their 44-year-old father who investigators believe disappeared following a highway crash.

Quebec provincial police spokeswoman Audrey-Anne Bilodeau said Friday police aren't ruling out anything in their search for Norah and Romy Carpentier, and their father, Martin Carpentier.

"All the hypotheses are on the table, and kidnapping is among them," Bilodeau said, "but the priority for us is that we have missing people that could be injured."

"We don't know his motivations," she said. "Are they good? Are they bad? Is he simply injured badly and not able to call anyone? It’s really hard to say right now, but our main concern is really trying to locate him and his two daughters."

Investigators said they believe the girls and their father were involved in an accident Wednesday night in St-Apollinaire, Que., when the vehicle they were in skidded into the median, flipped over and landed on the shoulder of the opposite lanes of Highway 20.

But when emergency workers arrived at the scene, no one was in the car. Bilodeau said the search is being concentrated around the crash site.

"There's some other information that leads us to think that the people involved may be moving and still in this area," Bilodeau said.

"Martin, we're worried. We haven't heard from you since the accident. We're wondering if you're okay, the girls, Romy, Norah," said Gingras, who is in tears in the video.

"Give us some news, give us a sign, call your parents, anything. What's important is that you're OK, we don't care about anything else. We just want to know you're OK."

Quebec Premier Francois Legault said Friday afternoon that about 80 people were involved in the search, both on the ground and in the air, and that the province had put all of its resources into finding the girls.

"All my thoughts are with the family, and we really hope that this ends well, that we find the two young girls safe and sound," Legault said.

A woman who says she is the mother of the two girls posted their photos on Facebook Thursday, saying "we need to find my daughters and their father."

Bilodeau said police are asking residents in St-Apollinaire to check their properties, including sheds, barns and cottages. Canine units have been deployed, she added, and searches are also being carried out on foot and on ATVs.

The mayor of St-Apollinaire, Bernard Ouellet, said the crash took place in a rural area about four kilometres from the main exit off the highway into town.

"There are many wooded areas — many, many wooden areas — but there are many rural roads, too. It's not completely isolated," said Ouellet about the territory around the crash site, which he added also contains several small cottages and shacks.

He said many residents have been searching their properties for any sign of the three. "It's worrying everyone a little bit," Ouellet said in an interview.

Raphael Patry, a St-Apollinaire resident who lives on the street where police set up their command centre Friday, said in a phone interview that a police truck with an antenna was parked in front of his home.

He said he saw over a dozen police officers in the area, as well as a helicopter, police dogs and ATVs.

Police said the father was last seen wearing a grey T-shirt and jeans and could be wearing glasses. They asking anyone with information about the three people's whereabouts to call 911.

— By Jillian Kestler-D'Amours in Montreal