A primer on the governance system of the Wet'suwet'en Nation 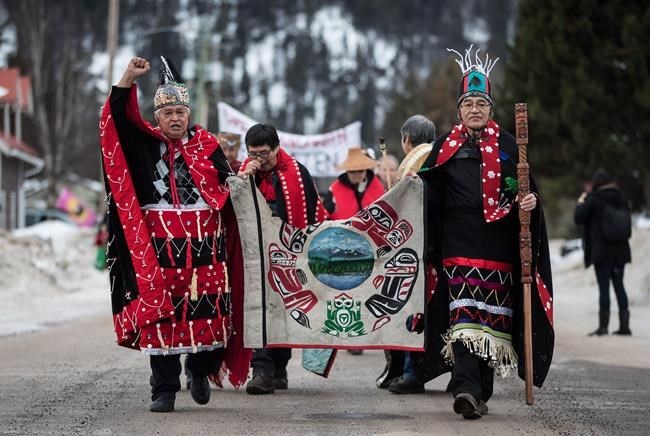 VANCOUVER — A B.C. Supreme Court case in 2011 explained the traditional Wet'suwet'en governance system. Here is a look at the decision and how the system works:

Clans and houses: The five Wet'suwet'en clans are each comprised of several houses, 13 in all. A house is a matrilineage of people related through their mothers and each house as one or more territory. Together, they comprise the Wet'suwet'en territory.

"The Wet'suwet'en occupation and use of land is organized by the clan and house system upon which the law and essential social structure is ultimately based," the court decision says.

Each house has a head chief and a sub-chief, or wing chief, and each chief has rights and responsibilities specific to the particular territory over which that chief is given a duty to protect.

"The rights and responsibilities are confirmed, co-ordinated and directed to the common good, in other words, governed, through the feast," it says.

Significance of feast halls: The feast hall is central to the traditional form of governance and is used for making important decisions. It's where Wet'suwet'en law is both enacted and upheld.

It is also in the feast that people are given their titles, their robes and their crests and the authority over the territory associated with those titles. This succession is witnessed by the Wet’suwet’en and the neighbouring peoples, the Babine, Nutseni and Gitksan.

Elders, shamans and chiefs would often feel the expectant mother's belly and determine if the baby was destined to future leadership. From that point, the child would be groomed or tutored to be a wise, strong and responsible leader. They would begin a succession of feasts over the course of their life that would ultimately lead to gaining a wing chief name, then a head chief name.

Before receiving a high-ranking chief name, a person would travel into the wilderness to live with the animals for an extended period of time. They would learn the ways of the animal world before returning to the community to assume a chief name. When they returned, they would have to demonstrate what they learned. This exercise exposed the prospective chief to the human world as well as the animal world, thus ensuring he or she had the utmost respect for both.