Torstar confirms it has received second offer for the newspaper chain

TORONTO — The owner of the Toronto Star says it has received a potentially superior second purchase offer from a private investor group. In response to a request from the Investment Industry Regulatory Organization of Canada, Torstar Corp.
Jul 9, 2020 2:07 PM By: Canadian Press 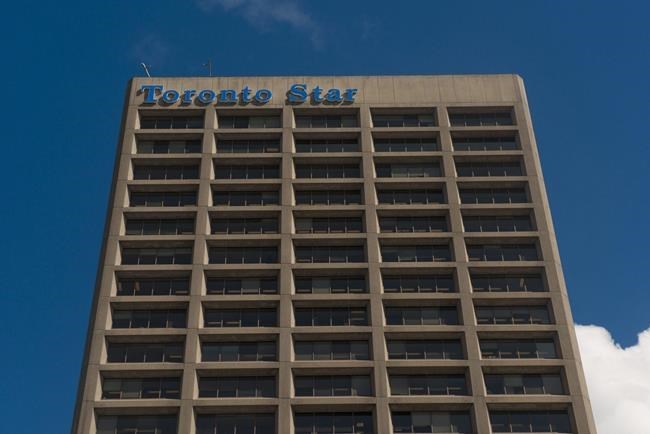 TORONTO — The owner of the Toronto Star says it has received a potentially superior second purchase offer from a private investor group.

In response to a request from the Investment Industry Regulatory Organization of Canada, Torstar Corp. confirmed it received a non-binding, unsolicited offer for all of the company's Class A shares and Class B non-voting shares.

The new offer is conditional on the completion of due diligence, the negotiation of definitive agreement and the entering into of voting support agreements with trustees of the Torstar voting trust, Torstar directors holding shares and Hamblin Watsa Investment Counsel Ltd., an affiliate of Fairfax Financial Holdings Ltd.

The Torstar board of directors is holding talks with the new bidder after determining that its offer "may reasonably be expected to constitute or lead to a 'superior proposal' " under the May 26 agreement with NordStar Capital LP.

The board has determined that the NordStar agreement is in the best interest of the company and continued to recommend that shareholders support the transaction at a special meeting scheduled on July 21.

NordStar has a right to match the new offer if the board determined that it is better than the original offer. The new company formed by Toronto businessmen Jordan Bitove and Paul Rivett, whose backgrounds are in corporate finance, says it has no plans to increase its bid.

"Our bid for Torstar fully values the company given the significant expenses that will need to be incurred to ensure the growth and prosperity of the flagship Toronto Star and community newspaper," NordStar said in a statement.

Torstar holds an investment in The Canadian Press as part of a joint agreement with subsidiaries of the Globe and Mail and Montreal's La Presse.

This report by The Canadian Press was first published July 9, 2020.

Companies in this story: (TSX:TS.B)

Minister says telecom regulator may have erred with wholesale rate decision
Aug 15, 2020 11:40 AM

Correction: California Heat Wave story
Aug 15, 2020 10:52 AM
Most actively traded companies on the TSX
Aug 14, 2020 5:19 PM
Comments
We welcome your feedback and encourage you to share your thoughts. We ask that you be respectful of others and their points of view, refrain from personal attacks and stay on topic. To learn about our commenting policies and how we moderate, please read our Community Guidelines.