NEW YORK — Two American oil giants lost more than $9 billion in the second quarter as the pandemic kept households on lockdown, cutting a gaping hole into a once-thriving business as the need for oil diminished around the world. Exxon lost $1.
Jul 31, 2020 3:48 PM By: Canadian Press 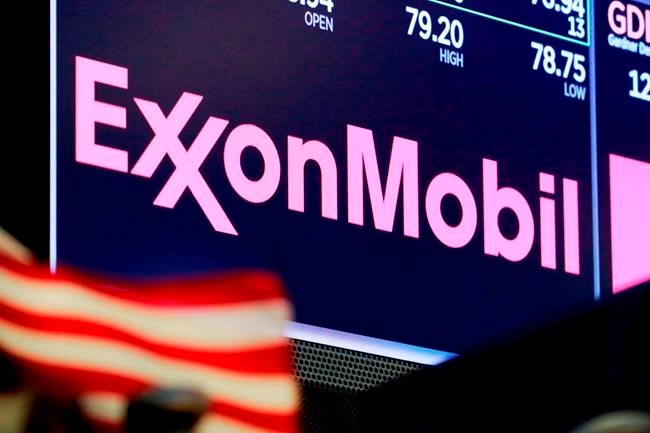 NEW YORK — Two American oil giants lost more than $9 billion in the second quarter as the pandemic kept households on lockdown, cutting a gaping hole into a once-thriving business as the need for oil diminished around the world.

Exxon lost $1.1 billion in the second quarter, and the Irving, Texas-based oil producer brought in $32.6 billion in revenue, less than half of what it brought in at the same time last year. Chevron Corp. lost $8.27 billion during the quarter, a sharp contrast to the $4.3 billion it earned a year ago.

The quarter was one of the worst on record for the oil industry. The price of a barrel of benchmark U.S. crude fell below $0 in April, a stunning downfall that had not before been seen in the industry. Producers had been pumping far more oil than the world was using as global travel all but shut down, and storage tanks were filling up. Petroleum consumption fell to a more than 30-year low in April, according to the U.S. Energy Information Administration.

Oil prices have recovered somewhat since, but have been stuck at around $40 a barrel for weeks, fetching 30% less than a barrel did a year ago and well below what most producers need to make ends meet.

As a result, the U.S. oil industry lost more than 100,000 jobs since February, with 45,000 of those jobs shed by upstream oil and gas companies in Texas alone, according to Rystad Energy, a consulting firm.

“Simply put, the demand destruction in the second quarter was unprecedented in the history of modern oil markets,” said Neil Chapman, senior at Exxon, on a conference call with investors Friday. “To put it in context, absolute demand fell to levels we hadn’t seen in nearly 20 years. We’ve never seen a decline of this magnitude and pace before, even relative to the historic periods of demand volatility following the global financial crisis and as far back as the 1970s oil and energy crisis.”

Exxon expects gasoline and diesel fuel consumption to rebound to levels similar to last year in the fourth quarter, but jet fuel will take longer to recover, Chapman said.

Exxon Mobil Corp. announced in April that it would cut its capital spending budget by 30%, to $23 billion, and its cash operating expenses by 15%, in 2020. The company is on track to exceed that goal and is exploring other ways to cut expenses, including evaluating its workforce around the world, Chapman said.

The pandemic is also making some of Exxon's work more expensive as it tries to keep employees safe. “We’ve had to charge planes to move our rotating operating staff all over the globe without the availability of commercial planes,” Chapman said. “We’ve had to lease hotels in multiple cities to quarantine our folks before they start their 30-day rotations.”

Exxon produced 3.6 million barrels of oil-equivalent, down 7% from last year. That included a 12% drop in natural gas production. But it boosted production in the Permian Basin by 9% compared to last year.

San Ramon, California-based Chevron brought in $13.49 billion in revenue, about a third of what it brought in last year.

Most of Chevron's losses hit its upstream operations, or oil and gas production, including a $2.1 billion hit to its U.S. upstream operations and a $4 billion loss in its international upstream operations. Some of its assets lost value. Chevron wrote off a $2.6 billion investment in Venezuela noting a challenging operating environment there and saying it's unclear whether the company would recover its investment.

“While we are disappointed by the impairment in Venezuela, we intend to maintain the presence in the country and resume normal operations one day,” said Pierre Breber, chief financial officer and of Chevron, in a conference call with investors.

“With health, economic and social crises all happening at the same time, this is a challenging quarter for Chevron and its stakeholders,” Breber said.

Despite the rough quarter, larger companies such as Exxon and Chevron have an advantage over smaller producers because they presumably have better balance sheets and access to capital markets, said Stewart Glickman, energy equity analyst at CFRA.

“The biggest unknown is what happens with the price deck, and that’s really anybody’s guess,” said Glickman, adding that while prices have stabilized at around $40, they could fall into the thirties as COVID cases rise. “I’m not really optimistic about the path of oil prices."

TSX up in first trading in August after Civic Holiday closure; U.S. markets slip
Aug 4, 2020 9:46 AM
Comments
We welcome your feedback and encourage you to share your thoughts. We ask that you be respectful of others and their points of view, refrain from personal attacks and stay on topic. To learn about our commenting policies and how we moderate, please read our Community Guidelines.