Key week in EU-UK talks kick off with confidence low

BRUSSELS — Britain entered a crucial week of post-Brexit talks with the European Union on Monday by rejecting the EU’s demand that it drop plans to breach the legally binding agreement it signed on its departure from the bloc.
Sep 28, 2020 11:56 AM By: Canadian Press 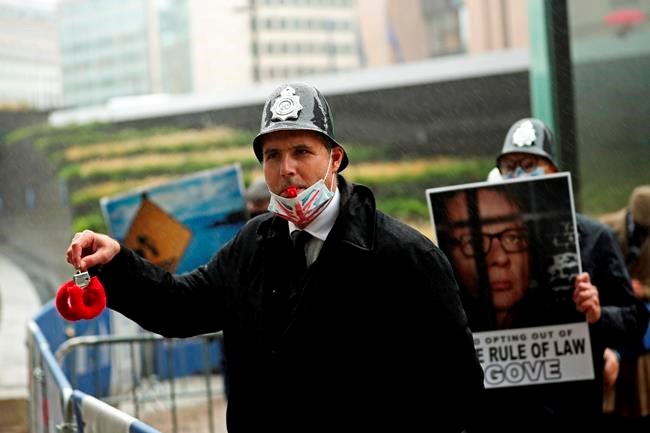 BRUSSELS — Britain entered a crucial week of post-Brexit talks with the European Union on Monday by rejecting the EU’s demand that it drop plans to breach the legally binding agreement it signed on its departure from the bloc. The EU told Prime Minister Boris Johnson to brace for a legal fight.

The EU insisted that abiding by every last detail of the international treaty that regulated the U.K.'s departure on Jan. 31 was key to maintaining trust and hopes of salvaging a rudimentary trade deal in the next few weeks.

After a short meeting between both sides Monday, Michael Gove, the U.K. minister in charge of Brexit planning, said Britain wouldn't withdraw its Internal Market Bill, which includes clauses to override the withdrawal treaty.

“Those clauses will remain in that bill” as a safety net in case the U.K. and the EU don't reach a trade agreement, Gove said.

The EU renewed its threat to take legal action if the U.K. doesn't drop the bill, which is currently passing through Parliament.

“We are considering all legal options available to us," if the bill proceeds as planned, European Commission Maros Sefcovic said.

The rift means that talks between the two sides' trade negotiators will begin Tuesday under an ominous cloud. The two sides have just weeks to strike a deal before a post=Brexit transition period runs out on Dec. 31.

Both sides stand to lose hundreds of thousands of jobs and a big chunk of their income if they fail to find a compromise agreement. Yet, Brussels and London have been digging in their heels and have vowed not to compromise on key issues.

Irish Prime Minister Micheal Martin said Monday his government “is preparing its budget in three weeks’ time on the basis that there will be a no-deal Brexit.”

If it becomes law, the Internal Market Bill will give the U.K. the power to disregard part of the Brexit withdrawal treaty dealing with Northern Ireland, which shares a 300-mile () border with EU member Ireland.

Johnson has said he wouldn't put it past the EU to abuse the treaty to put the Northern Irish part of the United Kingdom in an economic chokehold. The EU denies this and insists the full withdrawal agreement must be respected for fear that it otherwise might reignite tensions on the island of Ireland.

Britain and the EU jointly promised in the Brexit divorce agreement to ensure there are no customs posts or other obstacles on the Northern Ireland-Ireland border. The open border is key to the stability that underpins the 1998 peace settlement that ended decades of violence between Irish nationalists and British unionists.

Sefcovic warned Monday that Britain shouldn't try to use the withdrawal agreement and its Northern Ireland provisions as “a bargaining chip” in trade negotiations.

Against that background, trade negotiators, led by the EU's Michel Barnier and the U.K.'s David Frost, will resume talks this week, hoping to bridge gaps on EU boats' access to U.K. fishing waters and the amount of support governments are allowed to give to businesses.

The EU has accused Britain of trying tor retain the privileges it had as a member of the bloc without following the EU's rules. The U.K. says the bloc is making demands that it hasn't placed on other countries it has trade deals with, such as Canada.

Still, London maintained there was some hope that a deal could be reached before or at an EU summit in mid-October.

“We expect discussions to continue in the run=up to the European Council” on Oct. 15-16, U.K. government spokesman James Slack said.

“Although the last few weeks of informal talks have been positive, there remains much to be done,” he said.