MONTREAL — Industry players are warning governments that shortages of groceries, propane, drinking water and other goods are on the horizon as a rail blockade by anti-pipeline protesters enters its ninth day.
0
Feb 14, 2020 4:48 PM By: Canadian Press 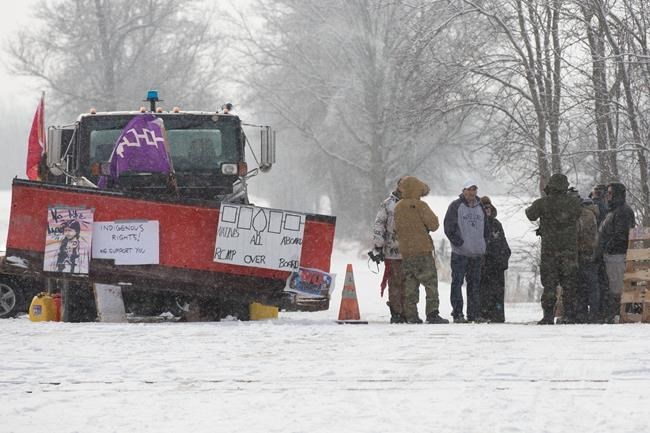 MONTREAL — Industry players are warning governments that shortages of groceries, propane, drinking water and other goods are on the horizon as a rail blockade by anti-pipeline protesters enters its ninth day.

Demonstrators set up a blockade on Canadian National Rail Co. tracks near Belleville, Ont., on Feb. 6 after RCMP officers enforced an injunction against opponents of the Coastal GasLink pipeline project that crosses the traditional territory of the Wet'suwet'en First Nation in northwestern B.C.

Fresh food, personal hygiene products and baby formula are among the goods that could soon run out as halted railcars in the eastern half of the country clog CN's network from coast to coast.

"It's not like there’s 10,000 idled trucks sitting in some subterranean basement somewhere that can just be dusted off if there’s a rail stoppage. There’s just too much volume for that,” said Retail Council of Canada spokesman Karl Littler.

Drinking water could also fall into short supply if chlorine for water treatment stays off the tracks, according to chemicals trade group Responsible Distribution Canada.

"This week it’s going to get very scary."

He cautioned that layoffs could be imminent, with the broader impact bound to dent the economy unless a resolution is found soon. “If goods start piling up at ports and factories, we’re going to see production halts that would affect employment.”

Industries from manufacturing to fertilizer say they respect the right to peaceful protest but argue it's time for federal and provincial governments to bridge the impasse or enforce injunctions obtained by CN.

“We do feel like we’re sort of getting sideswiped by a protest that pertains more to natural resources products than rail," said the retail council's Karl Littler.

Via Rail has cancelled all service on CN tracks in Canada, leaving only two northern routes open — between Sudbury and White River in Ontario and between Churchill and The Pas in Manitoba.

Prime Minister Justin Trudeau said Friday he has no plans to order the RCMP to end blockades of vital rail links across the country.

"We are not the kind of country where politicians get to tell the police what to do in operational matters," Trudeau said Friday in Munich, where he was attending a global security conference.

Conservative Leader Andrew Scheer called on Trudeau Friday to order Public Safety Minister Bill Blair to use his authority under the RCMP Act to end what he called the "illegal blockades" by Indigenous Peoples at the centre of a dispute over a British Columbia pipeline project.

Early Friday morning, demonstrators lifted a rail blockade that was set up four days earlier on the line into Prince Rupert, B.C. reopening a key port.

First Nations leaders had suggested that would happen if federal and provincial politicians agreed to meet to discuss solutions to the ongoing dispute over construction of a natural gas pipeline through Wet’suwet’en traditional land.

"For every train car that we use for pulp, it would take four trucks to move that same carload. For lumber it’s two trucks for every one train car," Nighbor said.

Some mills are on the verge of suspending operations due to a lack of chemicals or fuel, while others are paying out of pocket for extra warehousing and truck transport, he said.

“You can’t just turn the tap on and things are back to normal again. If everything got resolved to day...we probably wouldn’t get empty railcars to our mills till mid- to late-week next week."

Jean Simard, CEO of the Aluminium Association of Canada, said plants from Saguenay, Que., to Kitimat, B.C., are scrambling to find makeshift solutions for incoming and outgoing shipments.

“You have work out the delays and adapt your production, whether it’s tar, pitch or other types of products that normally come in on a regular basis,” he said.

The Association of Canadian Port Authorities says ports are beginning to turn away ships, with cargo rerouted to docks in the U.S. or less efficient truck transport at the risk of “long-lasting reputational damage.”

Canadian Federation of Agriculture president Mary Robinson says the backed-up rail lines are hampering producers' ability to export commodities, warning of "huge financial consequences" as farmers do not get paid until products get to market.

"Rail service disruptions can also have negative impacts on animal welfare issues, as propane shipments are crucial to keeping barns heated during the winter months," she said.

While the repercussions of the rail shutdown are negative for the vast majority of stakeholders, the closure of Via's Ottawa-Toronto and Montreal-Toronto routes has proven to be a bonus for Porter Airlines, which said more passengers have booked flights between those cities over the past week as a result.

This report by The Canadian Press was first published Feb. 14, 2020.

Companies in this story: (TSX:CNR)

Note to readers: This is a corrected story. A previous version stated that the Ontario blockade began Feb. 9.

Eastlink, TekSavvy at odds over whether Canada needs more wireless competition
Feb 21, 2020 5:44 PM
Comments
We welcome your feedback and encourage you to share your thoughts on this story. We ask that you be respectful of others and their points of view, refrain from personal attacks and stay on topic. To learn about our commenting policies and how we moderate, please read our Community Guidelines.