TORONTO — Executive chairman Richard Baker's influence over Hudson's Bay Co. is about to get another big boost as Canada's oldest retailer closes a turbulent chapter in its nearly 350 years of existence.
Mar 3, 2020 12:26 PM By: Canadian Press 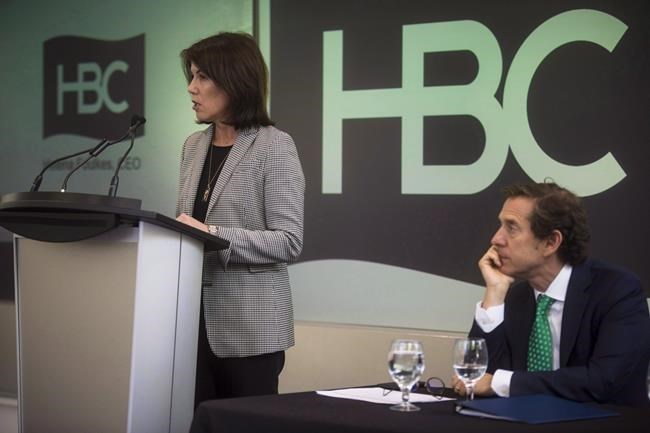 TORONTO — Executive chairman Richard Baker's influence over Hudson's Bay Co. is about to get another big boost as Canada's oldest retailer closes a turbulent chapter in its nearly 350 years of existence.

The Canadian retailer said Tuesday that Baker will replace chief executive Helena Foulkes, who is departing the company about two years after she was hired.

"The company and I are grateful for Helena's leadership and significant accomplishments over the last two years," he said in a release.

"Together, we have simplified our company, strengthened retail operations and reinvigorated our focus on the customer...We are optimistic about this exciting next chapter for our company."

Baker, a U.S. private-equity real estate investor, bought HBC in 2008, after the death of former owner Jerry Zucker. He took the company public for $17 a share in 2012.

The move comes just after Baker led a group of shareholders to take the company private once again. The deal, which was completed on Tuesday, saw Baker's group buy the company for $11 a share — a price they were twice forced to hike after their offers of $9.45 and $10.30 were met with criticism from shareholders Toronto-based Catalyst Capital Group and Land & Buildings Investment Management of Stamford, Conn.

HBC, which will celebrate its 350th anniversary in May, said the company will delist from the Toronto Stock Exchange on Wednesday and Foulkes' last day at HBC will be March 13.

Foulkes joined HBC in February 2018 after spending 25 years at the CVS Health Corp. and time at Goldman, Sachs & Co. and Tiffany & Co.

She was involved with the company's deal to merge its German department stores with its biggest rival in the European market and its decision to close its Home Outfitters business and evaluate the profitability of its U.S. Saks Off Fifth locations.

"We made bold moves to streamline the business, modernize our marketing, seize digital opportunities, bolster our senior leadership team and empower each of our retail businesses to excel in the future," she said in a statement.

"I'm proud of the work we have done and how HBC embraced cultural change to prioritize delivering for our customers and creating exceptional experiences.”

She and Baker spent much of the last two years marred in complaints from shareholders about executive salaries and their failure to unlock the value of the company's real estate.

In 2018, some shareholders attacked Baker's compensation — then $37 million in share-based awards and more than $16.6 million in option-based awards.

Those shareholders voted against the company's remuneration practices, saying "we don't feel the company sufficiently linked pay with performance" and "we do not feel that the awards have been sufficiently justified."

Just after Baker received shareholder approval for his latest HBC privatization deal, he told The Canadian Press he was focused on rolling out a new website for Hudson's Bay and re-investing in the business.

On Tuesday, he said in a release that he considered the changes and privatization at the company "a great outcome," but acknowledged there is work to be done.

"It will take patient capital and a long-term view to fully unleash HBC’s potential at the intersection of real estate and retail," he said.

Companies in this story: (TSX:HBC)