Keeping it nice and simple is the secret of their success: Baden Coffee Company

Owners Charlie Burke and Barbara Collins say Baden Coffee is all about good quality coffee, great customer service - and they serve up both every day
Feb 12, 2020 1:32 PM By: Susan Cook-Scheerer 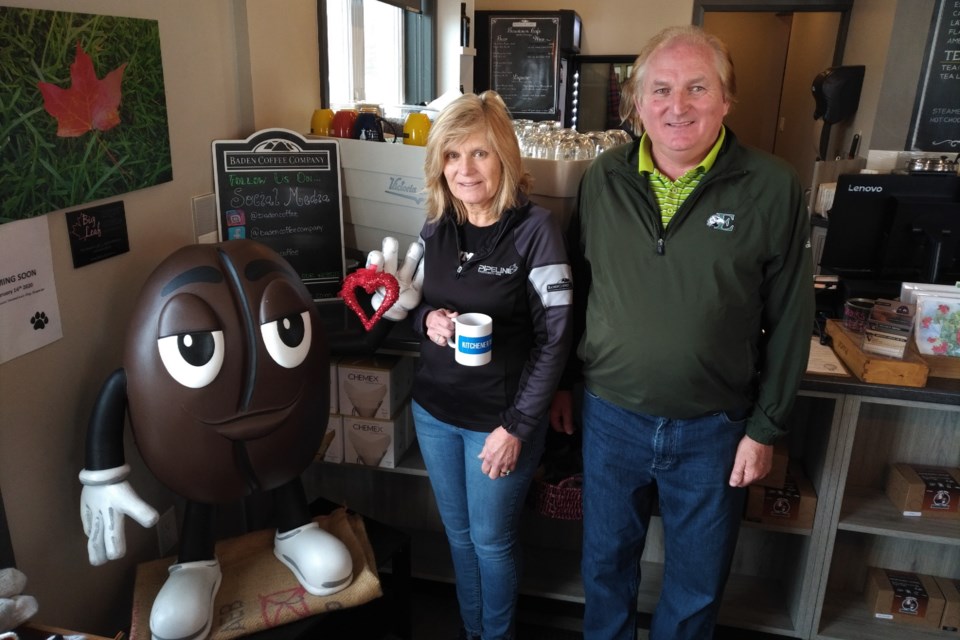 Baden Coffee Company got its start 23 years ago, when owner Charlie Burke discovered a niche in the coffee business.

"I had been working for a large Toronto coffee company in sales," he explains. "However, I noticed there was a need for someone to promote fair trade, organic coffee. There was a niche there, and I felt with my experience it would be a good fit."

The timing also turned out to be right. At that time, coffee beans were bought and sold and simply treated as a commodity. However, Charlie discovered people were becoming more interested in the coffee they were drinking: they wanted quality, and they wanted more selection. Businesses and consumers were also starting to ask more questions about where their coffee was coming from and how it was being produced. So Charlie together with his wife Barbara decided to start their own company - a coffee company focused on fair trade and organic coffee. They also had a desire to provide coffee to smaller businesses and restaurants so they could provide them with a quality product, and great customer service. And with that, Baden Coffee Company - a specialty roastery and wholesale coffee supplier- began.

The company started off small, providing coffee for local fundraisers, and then gradually started selling its product to businesses. Places like the University of Waterloo came on board, as sourcing good quality, fair trade and ethically sourced coffee was important to them. As the business grew, they decided to begin roasting their own beans, which allowed them to have better control over the quality of their products. Initially Charlie did the roasting himself: now, his son Cam has taken on most of the roasting duties. In 2007 Baden Coffee Company moved to its current facility in on Gingerich Road in Baden, which provided more space for their warehouse, offices and retail outlet. Then, 7 years ago, they opened Bean Town Café and Retail Outlet, and started serving up freshly brewed coffees, tea and baked goods along with breakfast and lunch offerings (which are now made fresh in the on-site kitchen at Baden Coffee).

"Before we opened the café, people would drive to Baden to pick up coffee beans," Barbara says. "We started to brew coffee so people who were here to make a purchase could enjoy a cup. It was our customers who said it would be nice to have a place to sit down and relax with their coffee while they were here. Eventually we decided to build the café out front."

Today, Baden Coffee has over 600 wholesale customers, along with selling coffee from its retail location in Baden. They currently feature coffees from over 28 different countries, and offer more than 40 different single origin coffees. Along with fair trade coffees, Baden Coffee Company also features Direct Trade coffee, which they source, select and buy directly from farmers they have met and formed relationships with in Nicaragua and Colombia. A portion of the proceeds from their Direct Trade coffees go back to support these farmers and their communities.

Providing their customers with great service is a big part of the core of Baden Coffee. "Our vehicle is coffee, but we're really in the people business," Charlie explains. "All of the people that work here support our ideas of providing excellent customer service. You have to treat people the way you want to be treated."

Both Charlie and Barbara also believe strongly in giving back to their community and do so in a number of different ways, including a special fundraiser for the KW Humane Society that will happen on Valentine's Day. Kaffee, Charlie and Barbara's chocolate lab who is well-known to regulars at Baden Coffee, will be manning her 4th annual 'Kissing Booth' from 9-11 am and 1:30-3 pm on February 14th. Anyone making a donation to the Humane Society will get a kiss from the friendly pooch, who is also happy to pose for a picture. In conjunction with 'Kaffee's Kissing Booth", Baden Coffee will also be announcing a special collaboration with the Humane Society on Valentine's Day - one that people will either have to stop into the café or watch their social media to find out more about. Charlie and Barbara are also both avid golfers, and developed PIPELINE - Roasted Down The Middle - a coffee designed to give back to junior golf by awarding golf memberships to young golfers.

"It's been nice that we can do things like the kissing booth and support local projects, and we can do direct trade initiative so we can support farmers directly," Charlie smiles. "It's important to support the people who support you. The whole business has been fun - and I've got another 20 years left in me!"

Celebrate Valentine's Day on Friday with Kaffee at @BadenCoffee!
This sweet pup gives kisses in exchange for donations, to help her furry friends at the Humane Society. pic.twitter.com/04agEWGBmH