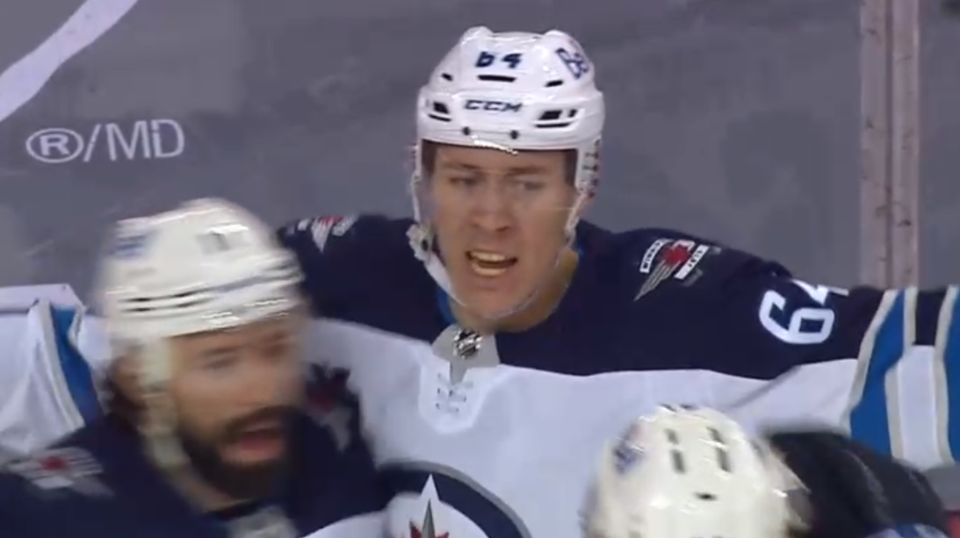 Screenshot of video from Sportsnet

WHAT A SHOT FROM STAN!!

The evidence was mounting and it was starting to get to the point where it was looking to be a matter of when, and not if, Logan Stanley was going to find the back of the net.

Given the high volume of shot attempts the Winnipeg Jets' towering defenceman had been able to generate during his first NHL season, it’s not a stretch to suggest Stanley was operating in the realm of being due.

But that’s part of the beauty of hockey: whether you’re a raw rookie or seasoned veteran, goals can often be tough to come by.

Some nights, a glorious chance rings off the iron or is quickly erased by an acrobatic save by the opposing goalie.

But sometimes, the stars align and magical milestones end up on national television.

After showcasing an uncanny ability to get his shot through from the point during the first 22 games of his career, Stanley found himself in the slot with the puck on his stick during the second period on Saturday night against the Calgary Flames.

When he ripped his shot bar-down on David Rittich, Stanley let out a guttural roar that told you all you needed to know about what it meant for the Kitchener/Waterloo product to deliver his first NHL goal.

“It’s a pretty good feeling to get that one. Something you dream of as a kid, playing your first NHL game and scoring a goal in the NHL,” said Stanley. “I’ve had some chances to score that haven’t went in. I try not to think about it that much. My primary job is to keep the puck out of the net. Just nice to get one past the goalie.

“My parents would say it’s because all the pucks I would shoot at the wall in the basement, maybe, working on that stuff. It’s just something I like to work on after practice and I like shooting the puck. When I get a chance, I like to shoot it. Sometimes, there’s other plays to be made.”

Stanley’s marker made the score 2-2, but the story took a twist and ended with the Jets suffering a 4-2 loss to a Flames team that played with the desperation required for a group trying to keep its fading playoff hopes alive.

Despite the defeat, the praise for Stanley was pouring in from his teammates.

Given the appreciation for the journey Stanley has been on to reach this point, the reaction was expected.

“It was just a matter of time. He gets so many pucks through, he’s got such a heavy shot,” said Jets captain Blake Wheeler. “(Stanley’s) probably been our biggest pleasant surprise this year. We couldn’t be happier with him, so it was great to see him get rewarded.”

There’s nothing quite like the look on the face of a player after they score for the first time.

“Yeah, it’s awesome. That’s one of those things you can carry with you for life,” said Jets centre Adam Lowry. “It’s one of those great memories he’ll have. To see him come so close last game, ring one off the post. For him to get a nice one (Saturday), we’re all really happy for him. Hopefully it’s the first of many.”

Stanley was viewed as a long-term project when the Jets made a trade with the Philadelphia Flyers to move up to the 18th spot in the 2016 NHL Draft and selected him.

At a time when Jets first-rounders were routinely jumping into the lineup within a couple of seasons, let’s just say a portion of the fan base was beginning to grow impatient with the progress of the defence prospect.

Stanley went back for two more seasons in the Ontario Hockey League and spent the first two seasons of his pro career with the Manitoba Moose in the American Hockey League.

There were signs of growth during that rookie campaign and a couple of injuries to overcome last season, but Stanley was the first to admit he wanted more from himself.

He was determined to take a step forward and wasn’t afraid to share that opinion publicly during training camp.

Well, after Luca Sbisa was claimed off waivers by the Nashville Predators and Tucker Poolman tested positive for COVID-19 following the season opener, Stanley was thrust into the Jets lineup.

Stanley made his NHL debut against the Toronto Maple Leafs on Jan. 18 and suited up in 13 consecutive contests before he was replaced by Poolman.

Then, after sitting out for nearly a month, Stanley got another opportunity when Nathan Beaulieu suffered a hand injury.

Since returning to the lineup, Stanley is building confidence and showing signs of growing into a steady NHL regular.

Sure, Stanley is being sheltered to a degree on the third pairing, but that’s not uncommon for a player of his age and experience.

“Early on, you kind of, you have the tendency your first few games in the NHL, you don’t want the puck on your stick a whole lot,” said Lowry. “I think now he’s gotten used to the pace, he’s gotten used to the speed, he’s kind of gotten used to the positioning. He’s starting to use his body. You saw him in Vancouver, he steps up and kind of sets the tone for us with a good fight. He’s been real good at stopping the cycle in our zone and getting shots through from the point.

"So he’s continuing to get better every day. As the games progress, he’s looked more and more comfortable out there.”

Some of the subtle things Stanley does with the puck in tight areas have caught the attention of the Jets’ coaching staff and his teammates.

It’s tough not to stand out when you stand six-foot-seven, but Stanley is gaining trust and showing he’d love to secure his spot in the lineup even when the Jets are back to full health.

“You know what, he’s been so close. He’s had a couple of bars and he’s had a bunch of great shots,” said Jets head coach Paul Maurice. “But I’ve really enjoyed watching his confidence grow and the quality of his game. There’s not a lot of big men that can go bar down like that, so we think we’ve got a good find here. Really happy with where he’s at.”

Stanley has taken some time to appreciate what he’s been able to accomplish so far, even though the compressed nature of the schedule doesn’t always allow a lot of time for reflection.

“It’s going by fast this year, lots of stuff going on,” said Stanley. “It is kind of hard to take a breath and kind of look at what’s going on. I’m just enjoying myself and trying to get better every day here and try and help this hockey club win hockey games.”

The loss snapped a three-game winning streak for the Jets, who slipped to 21-11-2 and are now two points behind the Toronto Maple Leafs in the battle for top spot in the North Division.

Will the Jets view this as a missed opportunity, a chance to perhaps leave the reeling Flames in the rearview mirror, since the cushion would have expanded to 13 points (instead of nine) with another regulation victory?

Maybe, but for a team that responded to consecutive regulation losses to the Edmonton Oilers with three wins in a row, this looks more like a minor bump in the road going into the finale of this three-game series on Monday.

Goaltending has been at the foundation of the Jets’ success this season, but this was a rare off-night for Jets backup Laurent Brossoit.

Although two of the four goals changed direction off the sticks of teammates, including one in the opening minute of the third period, Brossoit directed the final goal into his own net when he misplayed a shoot-in from Sam Bennett that appeared to be going wide.

The Jets certainly weren’t pointing the finger in the direction of the crease, since Brossoit is still sporting a .914 save percentage in his nine appearances so far this season and has done his part to instill belief with his body of work.

“You learn over time that these guys are really proud professional athletes, so you wouldn’t say anything to anybody after a game like that,” said Maurice. “You’d wait, slap him on the pads the next time you’re on the ice and have a chuckle about it and move on.”

Part of the Jets moving on is staring at another opportunity to regroup.

As the Jets get set to close out a season-high seven-game road trip against the Flames, it’s sure to be another test.

The Jets are 8-1-1 in games following a regulation loss and that bounce-back ability has become their calling card, a critical part of their identity.

Leaning on that foundation piece is something the Jets plan to do with regularity during the stretch run, since it’s the only way they’ll be able to remain in the race for first place.