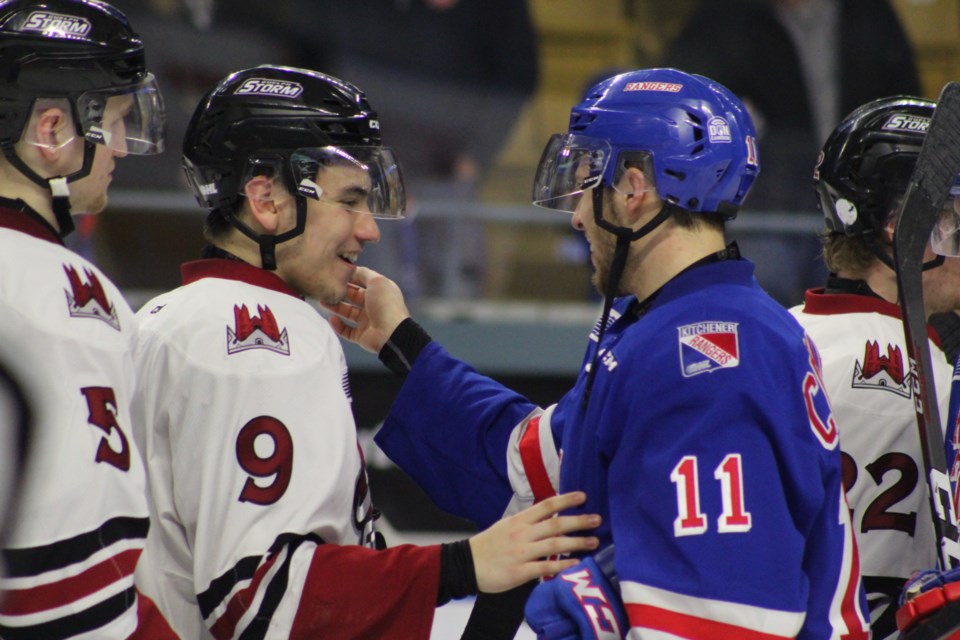 Saying goodbye is never easy to do.

Just over 5,000 in attendance got the chance to see the Kitchener Rangers one last time, as the Guelph Storm got three third period goals to complete the four-game sweep in a 5-1 victory Thursday night.

And in a nice touch, overagers Kyle Gentles and Cole Cameron got to skate together for the final shift of the game and were named second and third star respectively.

Mackenzie Entwistle nabbed the game’s first star after a goal and an assist.

The Team Canada World Junior alum scored the opening goal on the power play with five minutes left in the opening period.

Fast forward to five minutes left in the second, and Nick Suzuki got what turned out to be the winning goal, a wrister from the top of the right wing face off circle.

But the Rangers wouldn’t go away quietly, as captain Rickard Hugg got the home team on the board with under a minute to go in the middle frame.

In the third, the Storm put Kitchener away with Cedric Ralph getting credit for a goal that was reviewed. Replays showed Pavel Gogolev snapping one under the bar and Ralph putting the puck in to be sure.

No matter, Guelph took the two-goal lead and Alexey Toropchenko iced it with a breakaway tally with 6:17 left, along with an empty netter with under 90 seconds to go.

Luke Richardson made 36 saves in the loss, while Anthony Popovich turned aside 26 shots in the win.

Time will only tell how this Ranger team will look in the fall. But that’s six months from now, as we say good night to OHL hockey for another season at the Kitchener Memorial Auditorium.

For Guelph, they will await the results of the other first round series to see who they will face next.

The Storm score three times in the 3rd -- once into an empty net -- and beat the #OHLRangers 5-1, sweeping their first round series. Guelph meets London in Round 2...and I owe @RyanatLFPress a pitcher of beer. #OHL #OHLPlayoffs